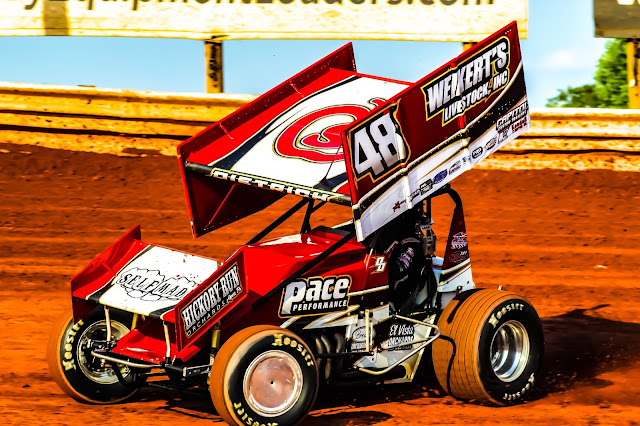 GETTYSBURG, Pa. (June 12, 2018) – “Double-D” Danny Dietrich put together an impressive streak of finishes during the recent weekend, scoring four consecutive top-ten performances from June 7 through June 10, highlighting the weekend with three podium runs, two of which against the All Star Circuit of Champions in New York.

Dietrich, a five-time winner during sprint car competition thus far in 2018, kicked-off his extended weekend with a third place finish at BAPS Motor Speedway near York Haven, Pa., on Thursday, June 7, followed by a second place finish against Tony Stewart’s All Stars at Outlaw Speedway in Dundee, N.Y., on Friday, June 8.

Continuing All Star competition in the Empire State, Dietrich rallied from 17th to finish seventh at Stateline Speedway near Jamestown, N.Y., on Saturday, June 9, all capped off with a third place performance during feature competition at Weedsport Speedway in Weedsport on Sunday, June 10. Dietrich’s weekend stats were more than impressive, advancing a grand total of 29 positions over the course of four main events, all of which contested at four different tracks in two states.

“To put together a stretch of solid finishes like that says a lot about this team. I’m proud of my guys and what we were able to accomplish last weekend,” Dietrich explained, driver of the Gary Kauffman Racing/Weikert’s Livestock/Sandoe’s Fruit Market/Pace Performance/Gsell’s Whitetails/Hickory Run Orchards/Drop Of Ink Tattoo/Sweeney Cars/Self Made/No. 48 sprint car. “It’s fun to head out on the road like that and visit some different areas. We have a lot of racing ahead of us. Hopefully we can keep this streak alive.”

If things go well during the early segment of Dietrich’s Speedweek schedule, the Gary Kauffman Racing entry will stay in Ohio and compete in the remaining Speedweek events including the inaugural Rick Ferkel Classic/Speedweek finale at Atomic Speedway worth $10,000 on June 23.

Dietrich will enter Ohio Sprint Speedweek with seven top-ten finishes against the All Star Circuit of Champions in 2018, all of which accumulated during ten main event starts.