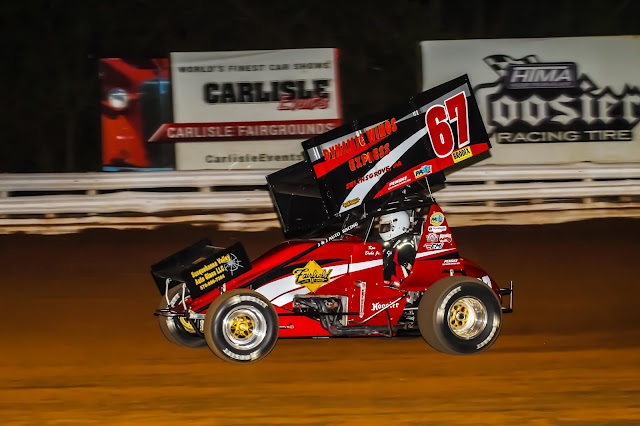 HAGERSTOWN, MD – Ken Duke, Jr. only needed the final lap to lead to score the win in the Mason-Dixon Showdown on Saturday night at Hagerstown Speedway.

For the first time in the history of Hagerstown Speedway, the IMCA RaceSaver 305 Sprints were the headlining division at the famed Hub City oval. The interregional event showcased cars from the PASS, Laurel Highlands, and Virginia Sprint Series.

53 IMCA cars were pitside with teams coming as far away from Vermont and North Carolina to compete at the Maryland half-mile for the 24 starting spots in the 25 lap feature event.

Zach Newlin and Ryan Lynn paced the field to the start, but Lynn amazingly did a 360* spin in turn four that unfortunately did cause a couple cars to get tangled up before the first lap was in the books.

Newlin led the way on the restart, but quickly had company with Jeff Miller on his tail. Miller powered by on the sixth circuit to grab the top spot, and looked like the car to beat as he sliced and diced through lapped traffic while running all over the track from the bottom to his own groove over the cushion up high near the guardrail.

Meanwhile, Duke quietly worked his way up to a distant runner-up spot from his 11th –place start on the grid. Fortunately for Duke and unfortunately for Miller, Miller’s mount broke and slowed to stop in the pit area after the white flag lap.

Duke led the final half of the last lap to go in the history books as the victor of the first IMCA RaceSaver event at Hagerstown.

In his winner’s interview with Danny Wilson, Duke stated: “You know honestly, Jeff Miller, he’s fast everywhere we go. He’s one of the fastest cars in this series. Starting eleventh, I would’ve been happy with a top five. We got up to second and began rolling on the bottom really well, and when he pulled off the backstretch, I just couldn’t believe it to be honest.”

“We’ve gone 21 months without winning a race, and that’s the longest I ever want to go without winning one…..I’ll tell you what, this track really takes well to 305 Sprint Car racing and if you have us back, we’d love to come back.”, said Miller.

Doug Hoffman got his second Pure Stock win of 2018, coming on the heels of default as unofficial winner Ryan Sager was disqualified upon post-race inspection. The top five was shuffled even more as Mike Desch also was disqualified. So that left second through fifth going to Jamie Zentmyer, Bryan Neff, Danny Beavers Jr., and Tom Wakefield.

Notes: This was the first race held at Hagerstown since April 28th. It was an absolute beautiful night for racing as 106 cars filled the pit area. Thanks go out to everyone who supported this night.

A wild multi-car flip took place in the second 305 Sprint heat race along the frontstretch following a restart, that saw one car just land over the guardrail into the pit area. No one was injured in the melee.

The Pure Stock feature had its share of controversy and attrition that led to only 12 of the 15 scheduled laps completed due to the 30 minute time limit rule.
Next week, the Ultimate Northeast Super Late Model Series presented by All Things Automotive comes back for the second time in 2018 with Super Late Models going for $5,000 to win.
Feature Results