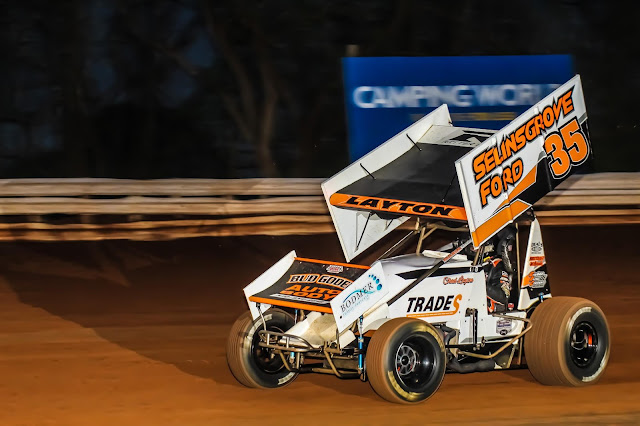 The $2,271 victory was Layton’s 26th career in 358-360 sprint car competition at the track. He also owns two career 410 sprint car wins, his last coming in 2006 at the track where he made a name of himself in central Pennsylvania sprint car racing in the early 2000s.

Mallie Shuster of Newville was the night’s Fast Tees Fast Qualifier over the 32-car field with a lap time of 17.424.

Jeff Rine of Danville scored his first win of the season and 108th career at the track in the $2,000-to-win 25-lap super late model main event.

Selinsgrove Speedway is back in action at 7:30 p.m. Saturday, June 23, with 360 sprint cars, super late models, pro stocks, and the Collier Paving & Construction Roadrunner 20 paying $600 to win. PEPSI will also be giving away prizes as part of the four division racing program. All track gates will open at 5 p.m.

In the Whitcomb Memorial, fifth-place starter Chuck Hebing took a wild flip in turn two at the start of the race. Hebing, who won a thrilling heat race earlier in the night, was not injured. When the race resumed, front row starters Chad Layton and Cody Keller put on a wheel to wheel battle for the lead.

In the early laps, Layton led Keller, sixth-place starter Davie Franek, fourth-place starter Justin Barger, and seventh-place starter Kevin Nagy. By lap eight, Layton began to encounter slower traffic as the race went for a long stretch without any cautions. At the halfway point, Franek made an inside pass in turns one and two to get by Keller for the second position.

Adam Carberry, who started deep in the pack in the 21st starting position, charged his way into the sixth position.

The final caution flag waved on lap 21 when Brian Nornhold’s car rolled to a stop in turn two. In the final four laps, Franek attempted to put in a bid for the lead but Layton maintained an edge and posted a .84 of a second margin of victory.

Franek settled for second while Keller held on for third with a collapsed nose wing on his race car. Nagy and Barger rounded out the top five.

Polesitter Hayes Mattern powered into the lead in the late model main event. He was closely chased by second-place starter Brett Schadel and third-place starter Kenny Trevitz. A caution flag on lap four for Andy Haus broke up the battle at the front of the pack.

On the fifth circuit, fifth-place starter Bryan Bernheisel advanced to third behind Mattern and Schadel. Eight-place starter Coleby Frye showed a lot of speed by lap eight and passed seventh-place starter Jeff Rine for the fourth spot. At the halfway point, Frye moved into the third position only to drop off the pace on lap 14.

On the 17th circuit, a three-wide race for the lead between Mattern, Schadel and Rine thrilled the fans with Rine taking command of the field on the backstretch.

With five laps remaining, Rine led Schadel, Mattern, fourth-place starter Gene Knaub, and Bernheisel.  The final caution flag slowed the field with one lap to go. The chase to the checkered flag saw Rine score the win by just .42 of a second over Schadel, Knaub, Haus, who was able to rebound from a flat tire and rejoining the race at the rear of the field, and Bernheisel.  Contact caused Mattern to loose a solid finish in the final laps of the race.

Front row starters Wayne Shaffer and Tommy Slanker dueled for the lead at the start of the pro stock feature. Racing into turn four on the first lap, Shaffer lost the handle and collected Kyle Bachman, who was able to rejoin.

For the restart, Brandon Moser found himself starting on the front row and grabbed the early lead. Early in the race, Moser stretched his lead over Slanker while Bachman battled his way back to third.

Slanker made a last-ditch effort to close the gap with Moser to no avail. Moser won his first career race over Slanker, Bachman, Jake Buck, and Daren Rice.

Second-place starter Smith Cope opened up a comfortable lead at the start of the roadrunner feature while a torrid battle for the runner-up position took place behind him between Bob Bussey, Jake Jones and Keith Bissinger.

With four laps remaining, Cope drifted high in turns three and four, allowing Bussey and Bissinger to close in on the leader. A three-wide battle for the lead and win unfolded on the final lap only to have contact off turn four cause Bussey to go into a wild spin down the frontstretch while Cope went on to take the checkered flag over Bissinger.

Jakes Jones, Brian Mabus, and Bussey, who rebound from the 360-degree spin, rounded out the top five.