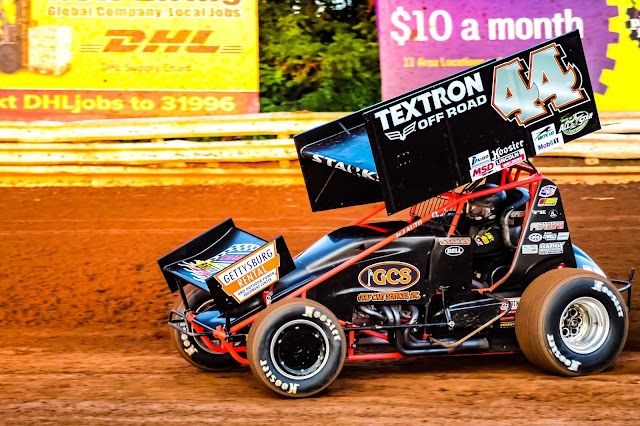 Mechanicsburg – Trey Starks wiped up the field in the opener of the 28th annual Pennsylvania Speedweek Series for sprint cars at Williams Grove Speedway on Friday night, scoring a $5,000 victory over Greg Hodnett.

In the 358 sprint main it was Kevin Nouse of Mechanicsburg scoring for the third time this season while extending his season point lead.

Starks earned the pole for the 25-lap speedweek main for the 410 sprints and entered the rear of the field on the ninth circuit with a lead of over 2.5 seconds.

Chad Trout trailed Starks from the start with Greg Hodnett racing in third.

However after Starks entered traffic, his pace began to falter around the lightning-fast oval surface and both Trout and Hodnett were able to close in.

Trout took a stab at the lead on the 12th tour but Starks was able to recover and maintain control however he benefited from a caution flag that unfurled with 11 laps to go.

The caution was for a slowing Danny Dietrich on the backstretch and it cleared the track for Starks who shot out to a massive advantage when action restarted, turning the fastest laps of the race in the 16-second bracket.

The Washington state leader was way out in front, by more than three seconds when the red flag stopped his pace with four laps to go for a flipping Adrian Shaffer in the fourth corner.

Again Starks jetted away on the restart however this time Hodnett got by Trout for second.

Hodnett failed to close on the leader before the finish however as Starks drove the Scott Gobrecht-owned No. 44 machine across the finish line by a 1.124 second margin.

The victory was the second of Starks’ career at the oval as he also took the 2017 speedweek Mitch Smith Memorial, which is coming up next Friday at the track.

Starks admitted in victory lane that some miscues in traffic as he set the pace was what allowed both Trout and Hodnett to catch him before the lap 14 caution flag.

Trout held on for third followed by a stout James McFadden and Brock Zearfoss.

Sixth went to Rico Abreu who had started 17th in the field.

Dewease withdrew from the main event near the halfway point. 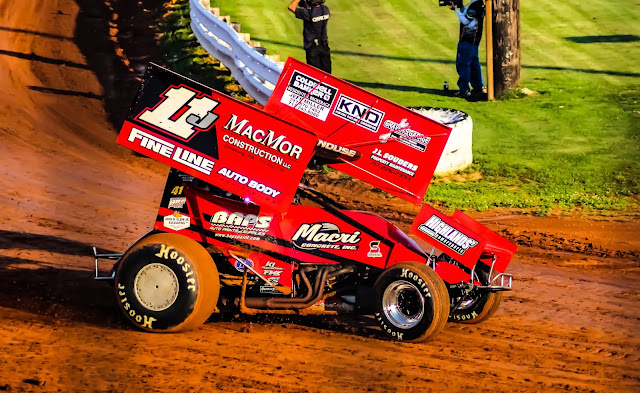 Cody Keller led the first 11 laps of the 20 lap main for 358 sprints before he spun in front of the field in the second turn.

This handed the lead to Scott Fisher with Glenndon Forsythe in second and Kevin Nouse running in third.

Shortly after Fisher crossed the stripe to record lap 13 as the leader, his mount came up lame in the first corner and he exited across the top of the second turn.

Not expecting the sudden slowing of Fisher’s pace, both Forsythe and Nouse blasted onto his tail and nearly collided.

However Nouse got the better of the deal and was able to squeeze by for the lead as Forsythe had to briefly hit the binders before continuing on.

Once at the front, Nouse was never challenged for the win.