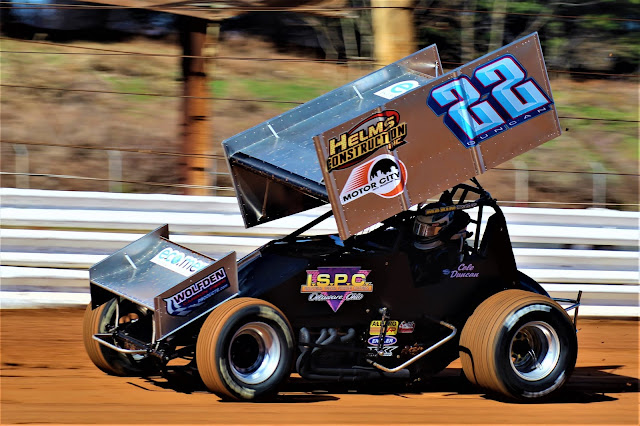 July 2, 2018 – SPRING RUN, Pa. – Fred Rahmer Promotions brought to you by Leffler Energy and Pioneer Pole Buildings put up $10,000 to win the Pennsylvania Sprint Car Speedweek race Sunday night at Path Valley Speedway and if not for Ohio’s Cole Duncan, it would have stayed in the Rahmer family.

But, Duncan used the middle groove, that Freddie Rahmer used to take the lead earlier in the 50-lap event, to drive back by him on a late-race restart.

“I don’t think I had anything if that last restart doesn’t happen,” Duncan said. “I knew we were running out of time. Everything fell our way late, but early I felt like I couldn’t make the right move in traffic and got shuffled back a little bit. Freddie kind of showed me the way around there. We were all bunched up around the bottom and he got to rolling right through the middle. I was a little surprised on that restart that he ducked back down to the bottom. He gave me a lane there and I made it stick. I had one opportunity. I knew if I showed my nose and didn’t make it stick, he was going to move up and block.”

Rahmer was disappointed, but satisfied, also, that he had a good run. He earned $3,500.

“The lapped car got me back on the bottom and I figured it was time to get back to the bottom,” Rahmer said. “If I would have run through the center down here, I don’t think he would have got me because once I moved up, I maintained. If I wasn’t going to win, I’m glad Cole did.”

The race was promoted by 13-time Speedweek champion Fred Rahmer, so the money almost stayed in the Rahmer family.

“That’s their deal and they do a great job on that,” said big Fred Rahmer. “We got beat by a better car. Freddie did a hell of a job for the amount of experience he has in those situations. I was really happy. He’ll be okay.”

Mike Wagner led the field down to start the 50-lap main event and controlled the opening laps which included two yellow flags.

Duncan was up to second and challenging Wagner for the lead by lap 12 as they raced in lapped traffic.

Cautions on lap 12 and 16 slowed the pace again.

Duncan once again challenged Wagner for the lead, but Brock Zearfoss got inside Duncan taking second. Rahmer, meanwhile, cracked the top five.

Zearfoss nipped Wagner for the lead at the flag stand on lap 25 and secured the top spot as they raced off turn two.

Duncan took third from Wagner as the caution flew again with 26 laps completed.

Following the restart, Rahmer used the middle groove blasting by Wagner, Duncan and eventually Zearfoss for the lead with 29 laps completed.

They were racing in heavy lapped traffic again and Duncan took second from Zearfoss.

The final caution flew and Duncan made his move on the restart for the lead and on to the win over Rahmer by .914.

Unofficially, Starks leads the Speedweek points by 54 over Zearfoss and 55 over Rahmer.