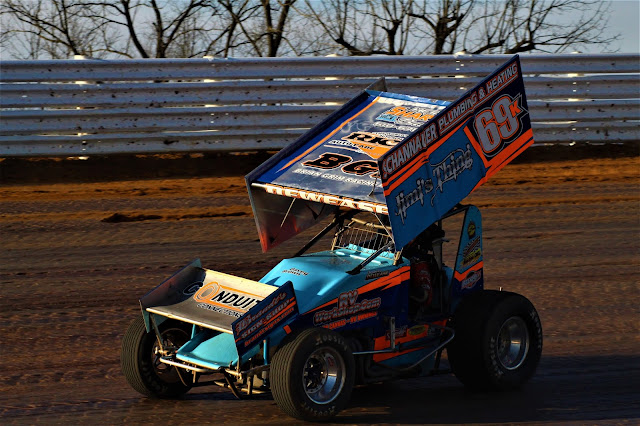 Dewease overtook Danny Dietrich in traffic on the 12th lap of the 35-lap maint to pick up the win after also claiming one of the semi-mains earlier in the night, worth $2,000.

In the 25-lap Moon Shine Camo Rt. 35 Series super late model main, it was Colton Flinner of Allison Park taking the $2,200 victory after dueling with Tim Wilson for his first career oval victory.

Dietrich drew the pole and Dewease the second starting spot for the 410 sprint car Dream Race and Dietrich rushed into the lead on the first lap although Dewease tried to sneak into control early.

Only three laps of the event were recorded before the only caution flag of the race unfurled for Dylan Cisney who was stopped on the backstretch after breaking a rear end on his car.

Dietrich chose the inside line for the double file restart and got away from Dewease’s No. 69K when green reappeared.

With 10 laps down, Dietrich held a .701 second lead over Dewease, just before he entered the rear of the field on the 11th tour.

And it was in that traffic that Dewease was able to snare control when Dietrich set his No. 48 into the first corner to work by a lapped car.

As Dietrich drove low to get by the car he also failed to hold a stead line, instead sliding up across the racetrack and as he was sliding, Dewease was biting fast on the low side through the turns.

The pair drag raced onto the backchute before Dewease blasted across the middle of the third corner to slide up in front of Dietrich for good as the pair raced off of the fourth corner.

The race for second heated up next as Brock Zearfoss caught Dietrich on the 19th tour and swapped the spot with him.

But Dietrich was up to the task and continued to hold the position until lap 24 when Zearfoss seized second, leaving Dietrich to content with Logan Schuchart.

Dewease had a straightaway lead with four laps to go as he continued to pull away, taking the eventual win by 5.398 seconds.

Dietrich regrouped late in the race and was able to sneak by Zearfoss and reclaim second on the final lap with Zearfoss settling for third.

After starting 13th, Freddie Rahmer put on a show from start to finish, motoring front to finish fourth and collect a $250 Hard Charger Award.

Schuchart finished where he started in fifth.

Twin semi mains worth $2,000 each were taken earlier in the night by McFadden and Dewease.

McFadden out raced and held off Logan Wagner to win the first semi with Dietrich finishing third.

Wagner did get by McFadden for the lead briefly on the eighth tour.

Dewease took his semi main victory over Logan Schuchart and Brock Zearfoss with Schuchart blasting into second on the first lap.

Logan Wagner set overall fast time on the night with a lap of 16.250 seconds.

It was his fourth win of the season at the track and moved him to within 19 of tying Keith Kauffman on the track all-time win list.

Gene Knaub looked shot out of a cannon when the 25-lap super late model main got started and was driving away from the field on the seventh lap when he blew a tire, surrendering the point to Tim Wilson.

Wilson had Colton Flinner and Matt Parks in pursuit after getting the lead and Flinner proved a challenge as the race wore on.

The front pair was racing closely, side by side on the 17th tour when they collided in the first corner with both drivers sustaining damage while continuing on only to collect fourth runner Andy Haus.

The restart for Haus saw the pair continue to duel while Tim Smith Jr. took a stab at the lead but Wilson soon began slipping backward and Flinner took control with six laps to go.

After starting 10th, Jason Covert came to second during the final few laps and tracked down the leader only to run out of time to mount a winning bid.