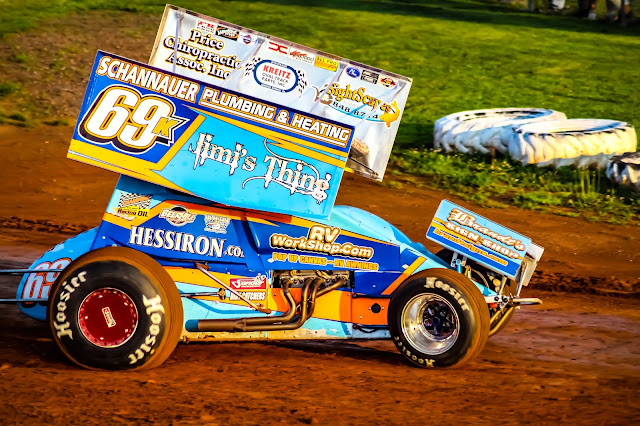 Dewease began the feature event from sixth on the grid and quickly moved into the top five by the fourth circuit and was running in fourth place when a caution flag waved for the spun car of Australian racer Jesse Attard on lap seven.

Pole starter Greg Hodnett led the way from the start and was followed by fellow front row starter Ryan Smith, with Freddie Rahmer in tow ahead of Dewease on the restart.

It took two laps for Dewease to move past Rahmer and Smith into the runner-up spot, albeit about a half-straightaway behind Hodnett. Hodnett held that advantage approximately three seconds ahead of Dewease at the halfway point of the contest.

Hodnett searched his way all over the track in the Mike Heffner No.27 through lapped traffic to keep Dewease at bay, but Dewease persevered along the bottom searching for a line that would allow him to reel in Hodnett’s lead.

As the laps wound down toward the end, Dewease pulled to within a couple car lengths of Hodnett. Dewease caught Hodnett with four laps to go, and then made the pass for the lead down low in turn three with three laps remaining.

Once out front, Dewease slightly pulled away to a .522 second advantage over a valiant effort by Hodnett to regain the top spot, but it wasn’t enough as Dewease drove to his 16th career win at the Hub City oval where he picked up his first career win 32 years ago in 1986.

“I was running as hard as I could, making sure I hit my marks. Greg (Hodnett) I think was a little better than us tonight, especially early in the feature. I just kept driving hard and found a line that I could get by those lapped cars. He got by those lapped cars earlier better than I could and I finally found a line in turn one and two to get by them a lot easier. I got at him and he stayed out there a little bit in three and I was going by him one way or the other. I didn’t know if I could hold him off or not and I just wanted to make sure I didn’t lose my pace after that.” said Dewease in victory lane.

Spencer Bayston had quick time in time trials with a lap of 17.008 seconds, while Hodnett, Macri, and Dewease were heat race winners. Rico Abreu won the B-main.

Notes: 29 cars were pitside for the only 410 Sprint Car race of the season that included former NASCAR champion Tony Stewart in competition for his first ever start at Hagerstown, while former NASCAR driver and World of Outlaws champion Dave Blaney was also racing. Stewart finished 11th, while Blaney finished 17th.

Dewease’s win moves him into a three way tie for sixth on the all-time Sprint Car win list with Ray Dovel and Bobby Abel whom each won at Hagerstown for their 16th career wins in 1969.

It also marks the 16th career win at Hagerstown for Kreitz as a car owner including his 13 wins as a driver.