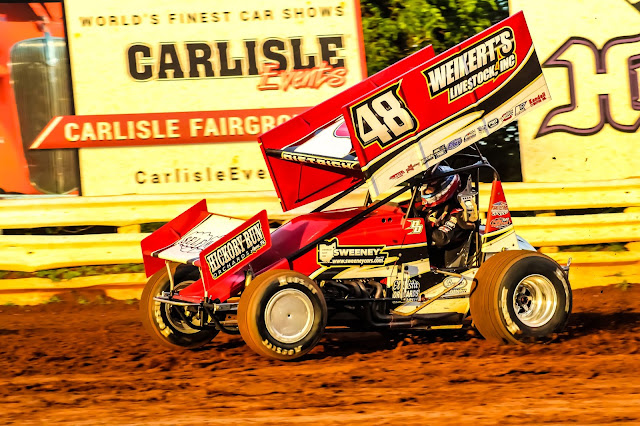 GETTYSBURG, Pa. (July 9, 2018) – Danny Dietrich’s 2018 PA Sprint Speedweek campaign was just two points shy of perfect, nearly winning the overall championship but settling for second just behind Greg Hodnett. The Gettysburg native entered all ten of the Speedweek programs contested between June 29 and July 8, winning three in the process for a total winner’s share equalling $21,000. The trio of victories, sweeping the pair of Lincoln Speedway programs, as well as earning a win at Port Royal Speedway during the second of two programs, bumped his season win total to eight.

Of Dietrich’s eight victories, four have been at the “Fabulous” Lincoln Speedway; four wins in seven Lincoln starts for the Gary Kauffman Racing entry.

In addition to his three wins, “Double-D” finished inside the top-five on four other occasions; charging from 12th to finish 5th at Grandview Speedway, second during his first Port Royal Speedway visit on Independence Day, third during the Mitch Smith Memorial at Williams Grove Speedway, and second during the PA Sprint Speedweek finale at Selinsgrove Speedway on July 8. Dietrich led the first 27 laps of the Speedweek finale before losing the top spot to eventual winner Lucas Wolfe. A victory may have solidified the Speedweek championship.

“I think the Speedweek title was ours to lose. A few bad results kinda hurt us in the end,” Danny Dietrich said, who suffered from a ‘DNF’ during his Path Valley Speedway stop during Speedweek. “Regardless, to battle back and be within a few points of the championship is pretty special. I have a great crew, as well as an amazing support group who show endless dedication. We have a lot of racing still to come this summer. I think a lot more great things will happen.”

With Pennsylvania Sprint Speedweek officially in the books, Danny Dietrich will look ahead and begin preparations for his next big challenge – the World of Outlaws Craftsman Sprint Car Series. Before the Greatest Show On Dirt invades Central Pennsylvania on July 19-21, Dietrich will use the upcoming weekend as a prime test session and enter action at Williams Grove Speedway and Lincoln Speedway on Friday and Saturday, July 13 & 14, respectively.

The Outlaws will invade Lincoln for the rescheduled Gettysburg Clash on July 19, followed by a two-day stop at Williams Grove Speedway for the Summer Nationals on July 20 & 21.