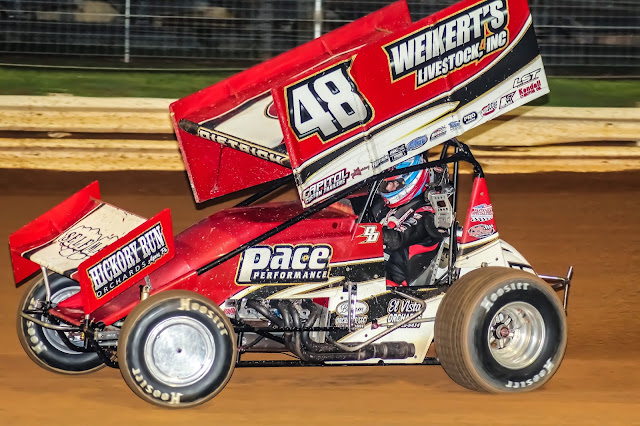 PORT ROYAL, Pa. – Danny Dietrich won a thrilling Pennsylvania Speedweek feature at Port Royal Speedway on Saturday night, becoming the third and final leader in the 30-lap non-stop affair that saw the top five cars racing within a straightaway of one another for the second half of the rousing event.

In the 25-lap Moon Shine Camo Rt. 35 Dirt Late Model Challenge Series event, Ralph Morgan Jr. of Hill Valley scored the victory worth $2,200 and was also the third and final leader of a crowd-pleasing event.

Polesitter Brock Zearfoss blasted into control at the start of the speedweek feature with Anthony Macri and Greg Hodnett giving chase.

Macri struggled to keep pace with Zearfoss as the race entered traffic on the seventh tour and by lap 13, Hodnett was challenging Macri for the runnerup spot with Dietrich breathing down both of their necks and Lance Dewease lurking in fifth.

As traffic grew increasingly heavy, it became more challenging for Zearfoss and the front-runners to negotiate and the field bunched up while exchanging positions two through six with Ryan Smith now in the mix as well.

With 12 laps to go, Macri was still in second ahead of Dietrich, who had taken third from Hodnett a lap earlier, but the margin between the pair was the blink of an eye or .011 seconds.

Dietrich took second with 11 laps to go and began running down leader Zearfoss but by that time Dewease was biting into the front-runner’s advantages while also battling Hodnett for third.

Dewease finally got third while chugging around the inside and then while Dietrich battled Zearfoss for control in nose-to-tail fashion, Dewease used his favored low line to pass both drivers on the 25th lap.

But the race that most may have thought was then over after Dewease took the lead, then turned even more thrilling as the move by Dewease seemed to put Dietrich’s elbows up even higher as he flung his No. 48 higher and higher around the speedway.

Dewease was never able to open up any advantage over Zearfoss or Dietrich and finding remarkable bite against the outside fence in the second corner, Dietrich was able to burst back around Zearfoss and then Dewease and take control on the 28th tour.

The Gettysburg driver then went on to record his third week of the current series by 1.880 seconds while Zearfoss stung Dewease for second on the final tour.

“I was finally able to beat the 69K’s ass,” exclaimed Dietrich to a raucous crowd after he drove back by Dewease to get the victory.

Heats for the 31-cars went to Dietrich, Dewease, Taylor and Macri with the consolation going to Jared Esh.

Wolfe set quick time in time trials with a lap of 16.814 seconds.

Hodnett leads speedweek points heading into the final race of the 10-event series at Selinsgrove Speedway on Sunday, July 8.

Morgan soon gave way to Marvin Winters on the sixth tour however and then Winters began running down Wilson’s advantage.

Winters was challenging Wilson for the lead on the 11th lap when the caution flag appeared for a stopped Jason Schmidt.

The ensuing restart saw Wilson trip up over the cushion in the first corner and take himself out of contention, remanding control to Winters with Morgan second followed by Jeff Rine and Kyle Lee.

Lee and Rine staged a great battle for third for several laps before Rine finally began getting away with the spot.

Morgan then began challenging Winters for control and took the lead with 10 laps to go only to see Winters rally and reclaim the spot with six laps left.

Rine was then in the mix and working traffic as he pressured the leaders when he made contact with a slow car with five laps to go in the third turn while working to its inside.

The contact found Rine nearly flipping over as his car lifted up and came close to tipping over on the driver’s side.

That incident sent the lapped car up across the track with Kyle Lee than slamming into it and the outside wall.

While Winters restarted with the lead, he again found a challenge from Morgan who worked by for control by the time lap 21 could be scored.

And this time after getting the lead, Morgan held it to the finish.

Drivers canvassed the crowd during the two-division event and collected over 5,000 to benefit injured sprint car driver TJ Stutts.