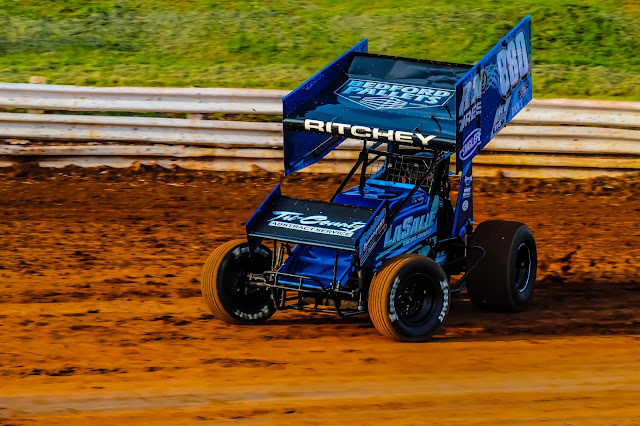 The Laurel Highlands Sprint Car Series was last at the Bedford Speedway on April 20th, then Sunday July 8th the IMCA Race Saver's returned with 18 sprint cars signing in to race. Was good to see many familiar faces along with a couple that have been missing for awhile. Nicole Walker and the #71 have been absent for a couple of years, she came out at Dog Hollow on June 30th then her 2nd appearance of 2018 last night having a strong showing. Back in the saddle was Coltt Lepley in the 4J, he had a crash late last year at Bedford and spent some time putting things back together, he did a good job while sorting the car out. Making some long tows to support the Bedford show were Greg Dobrosky, Jake Gomola, and Kyle Colwell. Jimmy White was back and had better luck than in April with a respectable showing and Eric Husick is getting comfortable behind the wheel of his mount and looked good on the big track. Matt Kline is having a tough year, seems crashes and mechanical issues plaque him, he repaired the car after a Hagerstown crash and last night looped the car in turn three during the feature ending his night. He will be back and turn things around. Jimmy Seger made his first Laurel Highlands start driving his Dad's #2 and did very well, the confidence gained from 410's. Jonathon Jones is usually fast at Bedford as is Scott Lutz and of course Drew Ritchey, all three had great nights. Brad Mellott, Ryan Lynn, had decent nights and Ray Sheetz who usually is solid said he missed the setup and struggled in the feature, back was second year driver Jim Kosnosky who had mechanical issues in April. Randy Sterling has his mount hooked up and looked great last night with a strong finish. Also lurking around the pits were Greg Denochick and Chris McCracken. Greg's son Tyler drives the family owned #6 and they are awaiting the new car and will be back soon while Chris is the Father of Hunter who had been racing with Race Saver and LHSS since 2014 but he recently joined the U.S. Air Force and the #37 is parked and For Sale. Tough luck for Kyle Colwell who took the lead at the start of his heat race but the engine let go coming down the front stretch ending his night. Here are the results:

For the feature event 8 cars redrew for the feature, the top four from both heats, Drew Ritchey drew #1 with Nicole Walker #2, at the drop of the green Ritchey grabbed the lead to set the pace with Walker, Greg Dobrosky, Ron Aurand, Jonathon Jones, Jimmy Seger, Randy Sterling and Scott Lutz giving chase. A few cautions slowed the pace but the 880 was hooked up and dialed in as he held at least a 10 car or better gap between him and Nicole Walker who had a fast car too. Scott Lutz who started 8th began a slow rise to the front as Ron Aurand locked into 3rd with a good race car. Jones, Dobrosky, Seger, Lynn and Sterling along with Gomola maintained the top ten until the checker. This is the finish order-------

The Summer Showdown points have tightened up as Ryan Lynn has closed to within 18 points of Kyle Ganoe who was not at Bedford last night. Scott Lutz has moved into third while Ron Aurand is fourth, all drivers within 50 points or less of the leader. Next racing for the LHSS is this coming Friday at the Clinton County Motor Speedway and again Saturday at the Path Valley Speedway which is a co-sanctioned event with the Pa Sprint Series, both races count as Summer Showdown points.

The Summer Showdown point race has tightened up some after the Bedford race on Sunday. The current point leader was not on hand allowing three drivers to close within 46 points or less so with two point races on tap this weekend things could really change??? Here is the current standings as of July 9th: