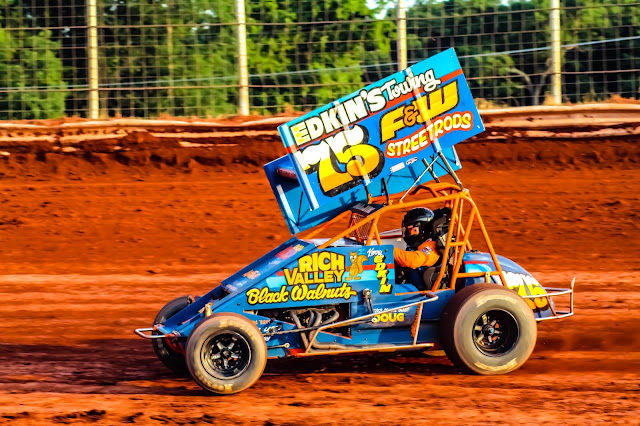 YORK HAVEN, Pa.: It’s been a bit of a strange year for Kenny Edkin and his team in Super Sportsman competition at BAPS Motor Speedway.

The beginning of the season was marred by Edkin getting caught in incidents that weren’t his doing. He also struggled to get a hold of the new track surface, which made trips to Victory Lane difficult.

Apparently, the Marysville, Pa., driver has rectified both scenarios. At least for the time being, anyway.

Edkin lost the lead to Garrett Williamson but then took it back. From there, he was  the class of the field in capturing the 25-lap Super Sportsman main event. It was his second win of the season at the speedway.

“If there was an accident, we were getting caught up in it,” Edkin said. “It was a wrong place, wrong time, type of deal.

Edkin started eighth on the grid and made his way to the front by blasting around the top of the speedway. He tracked down early leader Adam Wray in the first and second corner and shot to the outside for the lead on Lap 3.

But Edkin didn’t run away. Williamson, who started fourth, got underneath the leader and pulled off a slider to take the top spot.

Edkin wasn’t too pleased by the move. You could say he got up in the seat a little more and came after Williamson, retaking the lead in the first and second corner on Lap 7.

“We stuck with him once he got me,” Edkin said. “He didn’t pull away, and I knew it was going to be a matter of time until I got back by him.”

Edkin put on a show running near the outside guardrail and went untouched the rest of the way for
the win. Williamson had three opportunities to overtake Edkin after cautions but had to settle for second.

“It’s, definitely, big,” Edkin said of the win. “The track is starting to get wide and racy. That’s one thing that really suits me. I can move all over the track … top, middle, bottom, it doesn’t really matter.

“With them doing a new surface, the track just hasn’t been wide. The two nights it’s been wide, they are the nights we won.” 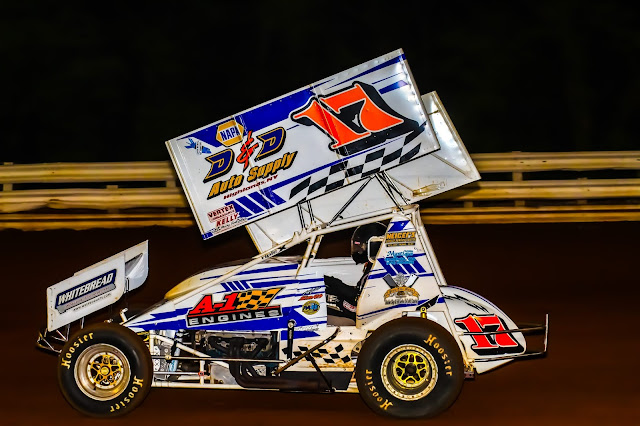 Kyle Smith started on the pole and drove away to an easy win in the PASS/IMCA 305 Sprint Car main event.

The issue for Smith was three caution periods over the race distance, but that didn’t slow his jaunt to the win. Austin Bishop, who started fifth, followed Smith to the stripe in the main event.

A hefty field of 38 Legends packed the pit area, with Jeremy Ott getting to the front and collecting the win in the 20-lap main event.

Ott started fourth on the grid and ripped by Travis Perry on the fourth circuit. Bill Diehl started seventh but was forced to settle for second. Mason Chaney, Scott Houdeshell, and Lucas Montgomery completed the top five.

Updegraff took the lead from Jeff Gill on Lap 7 but gave up two laps later, when Patrick McClane surged into the top spot. But Updegraff wasn’t going to be denied and took the lead on Lap 14 and led the final circuit for the win.

McClane, Travis Horan, Gill, and Rial completed the top five in the 20-car field. Kyle Emig came from 19th to seventh and was Hard Charger.

McClane was in the running for the second main event score, but Rial slipped by on Lap 10 and led the final five laps for the win.