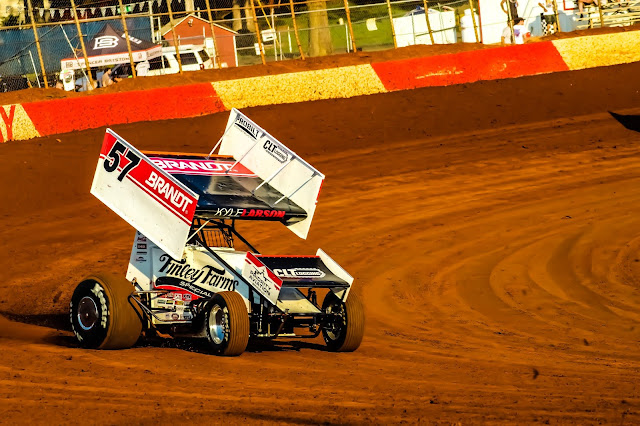 BECHTELSVILLE, PA (July 3, 2018) – It was an Independence Day celebration of speed as a capacity crowd witnessed NAPA Auto Parts Thunder on the Hill Racing Series action at the Grandview Speedway. NASCAR Cup Series driver Kyle Larson invaded to claim the Pennsylvania 410 Sprint Car Speedweek victory – round five of the 10-race stretch, while Jeff Strunk picked up the win in the NASCAR 358 Modified main event.

“Such an awesome crowd tonight,” Larson said in Victory Lane celebrations. “It seemed like a pretty exciting race, at least from my seat, every time I went to the top I’d see Greg Hodnett pull to my inside.”

A blind re-draw put James McFadden and Greg Hodnett on the front row of the 35 lap main event. Hodnett – a 9-time Thunder on the Hill winner – quickly jumped to the lead. Larson, who started in the fourth position, moved into contention on the third circuit.

With a 24-car starting field on the one-third-mile, lapped traffic became a factor on the sixth lap, with Larson taking the low-groove and Hodnett taking the high-side to split a lapped car. Larson powered around the bottom claiming the top spot.

The race’s first caution flew on lap 9, while circling the track under yellow James McFadden – running in the third position – pulled pitside to change a right rear flat tire.

Larson took command on the restart with Hodnett giving chase, the two diced high-and-low ticking off laps one-by-one, with Larson riding right up against the outside wall.

“It was such a fine line running right up that high, there’s such a risk of getting into the wall. I was a little nervous,” Larson offered.

With Larson running an extreme outside groove, Hodnett peeked to the inside of Larson’s No. 57 machine – before the two swapped lanes with Larson moving to the bottom and Hodnett on the top.

The 23-year-old Sprint Car ace turned NASCAR driver, used momentum and lapped traffic to close on the leaders forming a three-car fight for the win – but ultimately Bell’s night would end drastically bunching up the field with a right rear flat and collecting Trey Starks.

Larson outgunned Hodnett on the Lap 32 restart leading the final three circuits and collecting a $7,000 payday and his second consecutive NAPA Auto Parts Thunder on the Hill Series Speedweek victory.

Ryan Watt jumped to the early lead from his front row starting position followed closely by Jared Umbenhaue.. A lap 3 yellow flag slowed the field for the first time.
On the restart, Watt continued on in the top spot with Umbenhauer in second and Craig VonDohren moving into the third position.

The top-three competitors battled side-by-side for the lead, with Umbenhauer slipping past Watt on multiple occasions but unable to hold the top spot.

Lap-by-lap Watt maintained a command on the field with Umbenhauer and VonDohren forming a three car chase for the checkered.
A lap 21 restart offered Strunk an opportunity to pounce, first on VonDohren and then on Umbenhauer one lap later.

Strunk raced outside Watt’s No. 14W on the 23rd lap and finally completed the pass after multiple attempts. Strunk would go on to claim his 13th NAPA Auto Parts Thunder on the Hill Racing Series win and his first since 2015.