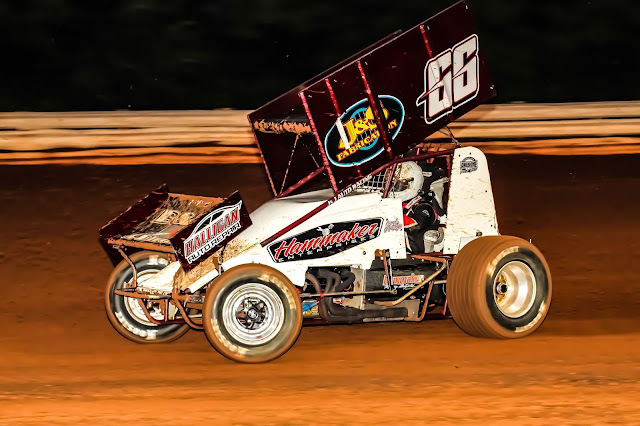 PORT ROYAL, Pa. – Port Royal Speedway welcomed back the 358 sprint cars on Saturday night after a six-year hiatus and it was Jeff Halligan knifing his way through the field to pick up the payday in the Mahoney’s Plumbing and Heating Summer Series event.


Halligan took home the posted $1,500 winner’s share plus another $440 in bonus money he was eligible for thanks to the Hoseheads.com gamblers draw.


Port Royals own Devin Hart turned in an impressive night of work by sweeping both econo late model mains in convincing style, making bold moves to get to the front in both events.


In the super late model main, Jeff Rine also worked forward from mid-pack to pick up a victory but only after seesawing back and forth for the lead in a thrilling battle with former track champion Tim Wilson.


A make-up 305 sprint main saw Zach Newlin pick up his first career Port Royal checkers while Kyle Smith claimed victory in the regular 305 sprint main to get his second oval win of the season.


A total of 105 race cars were in action on Saturday night with 225 laps of scored, green-flag competition put on the books.


Wyatt Hinkle led the first two laps of the 25-lap 358 sprint main before Eric Parker blasted by for the lead in what would be a non-stop feature.


Parker entered the backmarkers on the eighth lap and began working traffic and meanwhile, 10th starter Jeff Halligan was knifing through the field.


Halligan motored into third with 10 laps completed and then made quick work of Hinkle for second.


It took him a bit longer to run down Parker’s advantage but once he caught the pilot he was able to drive by for control with seven laps to go.


Parker waged a brief comeback, shooting under Halligan in an effort to regain the top spot with Halligan was up to the challenge and pulled away for a 2.369 second victory.


Chad Myers took the lead at the start of the 22-lap super late model main chased by Nick Dickson and Tim Wilson.


Wilson took second on the third lap and began his pursuit of the leader before finally muscling by for the point on a lap nine restart.


Wilson set a good pace once out front but eighth starter Jeff Rine was moving forward to challenge for the lead along with Tim Smith Jr.


Smith went into second on the 11th tour with Rine in third.


Rine raced into second on lap 14 and then ran down the leader with five laps to go and it was at that point that the front duo began performing swapping the lead at each end of the speedway.


Repeatedly, Rine would get in front using the low lane but Wilson would regain control using the high cushion to be scored the leader at the line.


Wilson made one miscue on the cushion with two laps to go and that secured Rine the win as he took advantage of the slip to race to his fourth win of the year at the track.


Zach Newlin restarted the make-up 305 sprint main held over from May 5 with six laps completed.


Newlin cruised around the track to pick up his first win at the track by 3.889 seconds over Jonathan Jones, Dylan Shatzer, Nick Sweigart and Drew Ritchey.


Kyle Ganoe led only the first two laps of the regularly slated 305 sprint feature before eighth starter Kyle Smith parted the waters from the fourth row for the lead and win.


Smith ripped around the speedway to record his second win of the year at the oval followed by Nick Sweigart, Ganoe, Ken Duke Jr. and Drew Ritchey.


In the make-up econo late model main from May 5, Devin Hart started on the pole and raced ahead of Eric Irvin until Irvin got by for control on lap five of the 18-lapper.


However Hart was not to be deterred or denied and he reclaimed the point from Irvin with seven laps to go before beginning to work traffic.


An impressive and slick moved on the backstretch to thread the needle between two backmarkers secured him the win late in the race.


Second starter Tim Fedder lead from the start in the regular econo late model main while Hart started out in eighth.


Hart was strong during the entire event and took fourth from Todd Snook with nine away and then third from Jared Fulkroad with eight laps to go in the 18 circuit feature.


Restarts on laps 12 and 14 gave Hart clear shots at the leading pair of Fedder and Irvin and the second restart saw him get by both drivers, first with a strong outside sweep in the first turn to get second before he dive-bombed under Fedder in the third turn seconds later to get control after passing both cars on the same lap.


Fedder was second followed by Irvin, Fulkroad and Snook.


Heats went to Hart and Irvin.


Keep up to date on all the latest speedway news and information by visiting the speedway’s official website at www.portroyalspeedway.com or by following the oval on facebook and twitter.