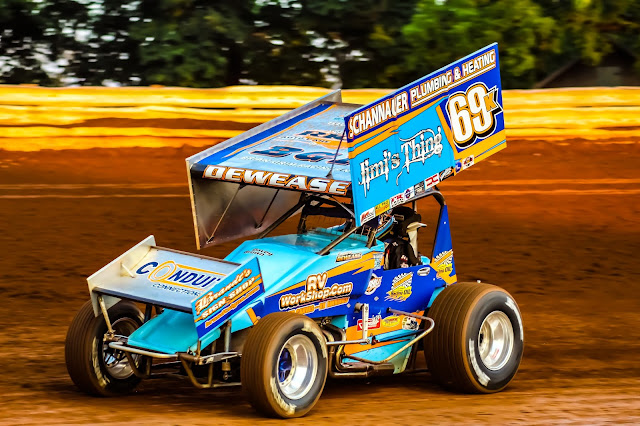 MECHANICSBURG, PA – Even with a top wing problem over the final two laps, Lance Dewease couldn’t be beat in the Mitch Smith Memorial Friday night at Williams Grove Speedway.


Dewease’s third Grove win of the season was the 90th of his career and tied him with Fred Rahmer for most wins all-time at the track. His victory was worth $12,000 in a car owned by Donnie Kreitz.

The Smith Memorial winner's share was upped to 12K this year after the Smith family posted an extra thousand and the speedway in turn matched their efforts.


The left side board of Dewease’s wing began to pull away from the center section creating vision and handling problems during the final few laps, but he held on to his second straight Speedweek win and 26th of his career.


“It was a handful,” Dewease said. “I knew I had to run down around the bottom. I was going to use up whoever got along side of me. I was shocked it took that long for somebody to get along side of me. I wasn’t going to wreck them, but they were going to have to figure out a way by me. I couldn’t see out the right side at all. I was just listening for somebody and I knew I had to move up some and take the lane away from them and use up as much track as I could. Drive 100 miles per hour with three flat tires. That’s what it drove like. You’re just manhandling it. Using the brake, using the throttle.”


Two of Williams Grove’s best, Greg Hodnett and Dewease, shared the front row to start the 30-lap main event. It was Hodnett getting the best of Dewease blasting off the turn two cushion while Dewease was on the bottom.


The leaders reached a pack of slower cars on lap 13. Hodnett had to slow entering turn three and that’s all Dewease needed to drive by and into the lead as they raced off turn four.


Dewease was slicing through traffic now with 12 laps to go as Rahmer and Abreu continued their battle for third.


Rahmer eventually secured the spot and closed on Hodnett and slid in front of him off four taking second with six laps to go.


The yellow flew with five laps to go for Jared Esh in turn four. This erased Dewease’s two second lead.


Dewease controlled the restart and had the race under control until he was coming down for two to go when the top wing began shifting creating major handling issues.


Hodnett passed Rahmer on the restart and was all over Dewease for the lead, but Dewease made his car as wide as possible. Danny Dietrich drove by Rahmer for third. The top three were nose-to-tail, and sideways, as they raced off turn two on the final lap.


Dewease led them down the back stretch and through turns three and four. Dietrich went all the way to the bottom of turn four trying to get by, but Dewease beat them both back to the line winning by 0.140 over Hodnett and Dietrich.


“I saw Lance’s wing and he was having a hard time getting down the straight aways,” Hodnett said. “I know how that feels. It’s very difficult to keep a straight line. I got a couple runs on him, but if I would have pushed the issue, I would have probably crashed us both.”


“Nowhere to go,” Dietrich said. “I don’t know how Lance drove it like that. I tried everything I could do to get around Greg. I knew Lance would be coming up the race track to block. We came from eighth to third. I wish we could have started up front. We had a fast racecar.”


Hodnett leads the Speedweek points by 64 over Rahmer, 65 over Wolfe, and 66 over Dietrich. Starks is fifth and 116 back of Hodnett.


In the 20-lap Mason Dixon Shootout Series event for the 358 late models, Shaun Jones started on the pole and drove into the lead. Justin Weaver raced from fifth to second.