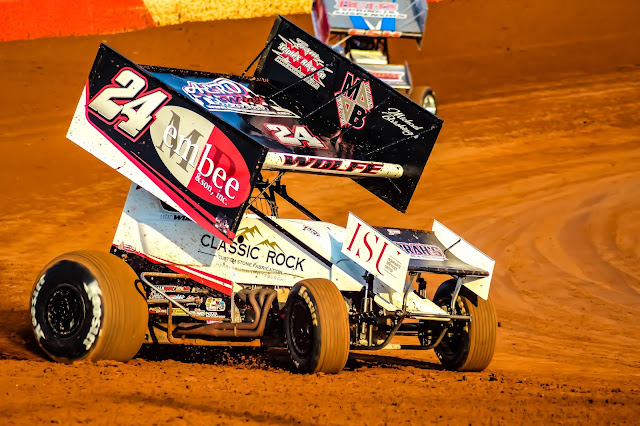 In the URC Sprint main, after a thrilling battle for the lead between Chad Layton, Curt Michael and Steve Buckwalter, Buckwalter came out on top for the $2,000 checkers.

Danny Dietrich drew the pole for the start of the 30-lap speedweek main for the 410 sprint cars with Greg Hodnett drawing the outside of the front row.

Dietrich got ahead of Hodnett when action began and was still in front on the sixth lap when a third turn flip by Gerard McIntyre Jr. brought out the red flag.

Dietrich continued to lead on the restart with Hodnett and Wolfe in tow and for a while the pair battled for second before Hodnett began tracking down the leader as the race reached the halfway point.

Hodnett darted to Dietrich’s outside as the pair exited the fourth turn to complete lap 16 and then appeared headed to the win while Wolfe began battling Dietrich for second.

But then suddenly Hodnett slowed with a flattened front wing with 11 laps to go, handing the point back over to Dietrich with Wolfe and now Trey Starks in a challenging position as well.

The new life for Dietrich lasted only two circuits before Wolfe, whose car was working flawlessly on both sides of the speedway, also drove by Dietrich in the fourth turn to take control with nine laps to go.

Once in control, Wolfe began blasting away from the field, turning the fastest laps of the race with two laps to go.

It was the defending speedweek champions first series win of 2018 and his second overall of the year at Port Royal Speedway while giving him a total of nine on the oval’s all time win list.

Wolfe stretched out his margin by the finish to take the win by 4.493 seconds over Dietrich with Trey Starks finishing third.

Fourth went to sixth starter Spencer Bayston of Indiana, who prior to the night had never set eyes on the historic oval.

Heats went to Bayston, Wolfe, Dietrich and Stewart with the consolation going to Jared Esh.

A 90-minute rain shower delayed the start of the program by approximately one hour while also producing lightning-quick speeds on the half-mile.

Chad Layton drew the pole for the start of the 25-lap URC Sprints main and took the lead at the start over Curt Michael.

Michael beat up on Layton repeatedly during the early going, taking the lead more than once only to see Layton dart back to his inside in the third turn and reclaim control.

A caution period on the fifth tour bunched the field and Michael again got the upper hand on Layton but Layton rallied back to reclaim control with eight away, again by executing massive dives low in to the third turn to come up across the track and make the pass.

And while all the racing for the lead was taking place, sixth starter Steve Buckwalter was making tracks to the front while blasting the outside lane and on the ninth tour he completed a two-car pass of both Michael and Layton to net command.

Layton again battled back to reclaim control on several occasions by Buckwalter’s high line momentum was always enough to allow him to ride back into the top sot.

Layton got another clear shot on a lap 17 restart with Buckwalter again using his momentum to get out in front, where he stayed for the win.

Heats went to Michael and Layton.

The race then entered traffic on the 12th tour