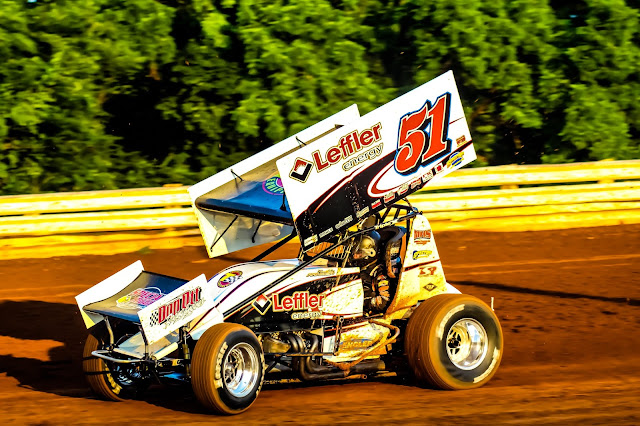 Mechanicsburg – Greg Hodnett and Freddie Rahmer staged a wheel-banging performance in Friday night’s sprint car feature at Williams Grove Speedway with Rahmer coming out on top in the battle.

The win was Rahmer’s first of the year at the track and was worth $4,000 in the outlaw tune-up event.

Lance Dewease earned the pole for the start of the 25-lap 410 sprint car main with Hodnett lining up to his outside and Dewease blasted into control when the green flag fell.

His run at the front was very short lived however because as the field thundered back to the start/finish line, Dewease’s mount suddenly slowed just shy of the line, handing control over to Hodnett.

Dewease then tagged onto the rear but soon again fell off the pace and withdrew with reports from the pits indicating that his car was jumping out of gear.

Hodnett was chased by Lucas Wolfe for the first lap restart and Wolfe would later give him a run for his money on a lap five restart by pulling right up on his back bumper only to see him jet away as they raced into the third turn.

Rahmer started seventh in the field and was up to third for the lap five restart and just after Wolfe took his shot at the lead, Rahmer drove by him for second and began reeling in Hodnett.

Rahmer took his first shot at control on the 12th tour only to see Hodnett go back in front and then with 9 laps to go the fireworks really got going when Rahmer was able to get to Hodnett’s inside as the pair raced onto the frontchute.

With Rahmer ready to go out front, Hodnett pulled his mount down across the track and the pair banged wheels and bounced back off of one another with Rahmer getting out of the pedal to save his car.

The next time around, the tables were turned and it was Rahmer on the outside as the pair shot onto the backchute with Hodnett dropping off of the cushion to rally back inside.

And this time Rahmer brought his car down across the track with contact turning the nose of Hodnetts car directly left for the flicker of an eye and then he too had to back out of the pedal to save his car.

This allowed Rahmer to get control but the pair was still close with five laps to go when Wolfe and Anthony Macri made contact in the third corner.

With Wolfe in third, Macri shot in on him in an effort to take the spot and the pair ended up spinning, bringing out a yellow flag.

The restart saw Rahmer jet away to the victory by 2.593 seconds over Hodnett, Cory Haas, Danny Dietrich and Brian Montieth.

Heats went to Hodnett, McFadden and Wolfe with fast time being set by Hodnett with a lap of 17.371 seconds.

Dewease won the dash to put himself on the pole of the feature.

Wyatt Hinkle would lead the first 10 laps of the 25-lap 358 sprint main before fourth starter Dave Brown Jr. took over.

With Hinkle unable to hold his car down in the first and second turns, the door was open for Brown to drive into control.

Brown would lead the rest of the distance despite several restarts including one with four laps to go after a wild frontstretch flip by Kenny Kuhn.