Scott Dellinger picks up $2,500 for his 5th win of the season in the Firecracker 40 at BAPS Motor Speedway 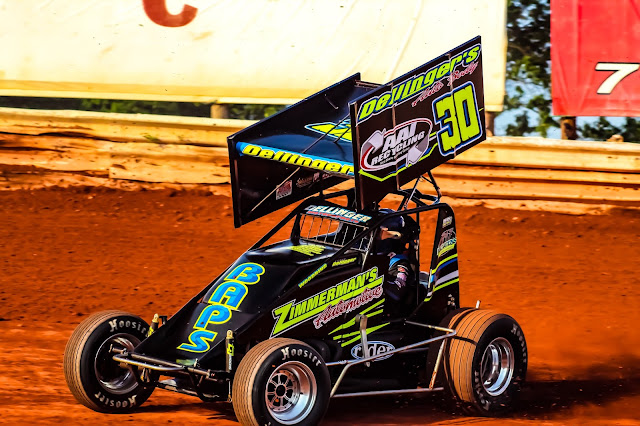 YORK HAVEN, Pa.: Car owner Bob Dellinger was up front with his team expectations for the BAPS Firecracker 40.

And his son, Scott Dellinger, as well as the crew, responded and didn’t disappoint on a sweltering night at BAPS Motor Speedway.

Scott Dellinger decimated the field, running away with the prestigious event and a $2,500 payday. At one point, Dellinger had a five-second lead over the field.

Bob Dellinger told PA announcer Dave Hare earlier in the night upon finding out the track was teching heads, “If they do, we better be eating sub.” The winner receives a six-foot sub from Rock-It Pizza.

“Maybe we will prove a point this thing is legal,” the car owner said. “We got the same guys, and everybody is doing their job well. Scott is driving way beyond belief. We didn’t fall off the wagon yesterday, so we have a lot of practice.”

Front-row starters Steve Fannasy and Davey Walsh got together on the initial start, which caused a seven-car pile-up. That moved Dellinger, who started fourth, up to the front row … as if he needed it.

Dellinger owned the complete restart and opened up a huge lead. The only thing that slowed him down was three more cautions and a tricky racing surface that demanded every bit of a driver’s attention.

“Nasty, that’s the word to describe the track,” Dellinger said. “It was like riding a rollercoaster ride.

“It was a little rough up top, and there was a big bump getting into Turn 3, and Turn 4 would catch you and draw you in. I didn’t know what else to do except to hold the car as straight as I could.”

There was an open red after a caution period halfway through the event. But not even that could slow Dellinger down.

Dellinger mastered the track and the temperatures. He was untouchable at the front of the field and took a 5.9-second win over defending race champion Kenny Edkin at the finish.

“With temperatures the way they were, I was just looking for the five to go to get this thing over,” Dellinger said. “The heater was working really good in the car, so no A/C. It’s, definitely, hot. I attribute dealing with the heat to bailing hay back home, and that about kills you, too.”

It was Dellinger’s fifth win in 10 starts this season. He now has 11 wins at the speedway, which is fifth on the all-time win list.

“It’s a feat to be on that list with all of the guys that have done that,” Dellinger said. “It’s a demanding racetrack.

“It just took me too long to get here. I’m on the downward side of my career, probably, and I would’ve liked to have gotten here 10 years ago. I might’ve had more in me.”

Edkin came from seventh to second. Chase Gutshall and Chad Criswell charged from 11th and 10th to land top-five finishes. Frankie Herr, who was involved in the first-lap incident, came back to fifth.

Beard took the lead from Cameron Benyou on the second circuit. He was attempting to lap the backmarker of Jennifer Hartz on Lap 3, and heavy contact ensued, ending Beard’s chances of victory.

Potts took over on Lap 4 and led the rest of the way. He was followed by Benyou, Alan Sagi, Brian Shuey, and Travis Mease.

Derr led the first two circuits before giving way to fifth-place starter Jasen Geesaman on lap 3. But Derr stayed close and returned the favor on Lap 14 and led the rest of the 20-lap race distance.