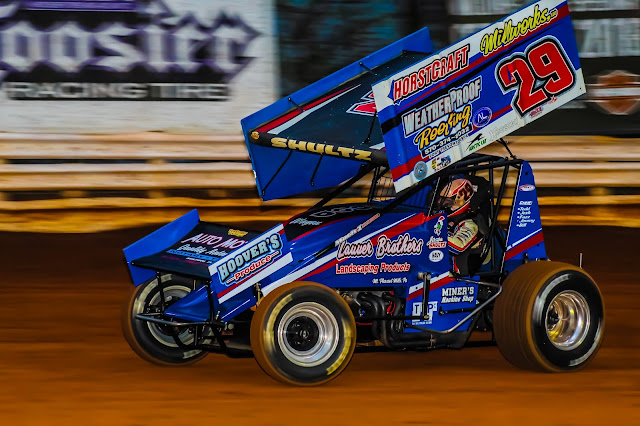 SELINSGROVE, Pa. – The intense summer heat wave was no match for some of the most intense racing of the season Saturday night at Selinsgrove Speedway.

Jason Shultz of Carlisle came away with his second win of the season in the 25-lap 360 sprint car main event at the wheel of the Horstcraft Millworks No. 29 entry. At one point in the race, the top five runners were racing under a blanket in traffic for the lead and ultimate victory.

The super late models also put on a suspenseful race with Coleby Frye of Dover scoring his first win of the year in the 25-lap feature over Hayes Mattern of Beavertown.

Brad Mitch of McClure made a last-lap pass by Shaun Lawton of Bloomsburg to win his second race of the season in the 15-lap pro stock main.

Smith Cope of Danville made it two in a row in the 12-lap roadrunner race after fending off three-time winner Ryan Zook of Mifflintown.

The speedway took a injured and benevolent drivers fund collection which netted $5,182 to benefit injured sprint car driver and former track champion TJ Stutts and the family of the late sprint car driver Jason Johnson. The fund was collected from a variety of sources including a helmet collection by the drivers, a t-shirt sale coordinated by Jim Shuster and a contribution by the speedway.

Selinsgrove Speedway will be back in action at 7:30 p.m. this Tuesday, July 3, with Firecracker 30-lap main events for the 360 sprint cars and super late models paying $3,000 to win and $275 to start. The pro stocks will run a 15-lap race in memory of former track champion C.W. Smith paying $1,028 to win. Tuesday’s race, sponsored by Selinsgrove Ford, will be highlighted by a professional fireworks display. Track gates will open at 5 p.m.

Fourth-place starter Jim Shuster led the first lap of the sprint car feature until sixth-place starter Derek Locke made an outside move in turns one and two for the front spot. On the third circuit, eighth-place starter Jason Shultz advanced to second and started to reel in Locke.

With the leaders beginning to encounter slower traffic by lap 15, an intense five-car race for the lead put everyone in the house on the edge of their seats! Locke, Shultz, Walter, Layton, and Smith put on a breathtaking wheel-to-wheel battle.

On lap 19, Locke’s car bobbled in turn two, allowing Shultz to drive into the lead. A lap later, near-calamity struck when two cars spun in front of the leaders in turn four. All the drivers in the lead pack took evasive action and avoided a collision with the disabled race cars!

For the final restart, Shultz kept the field at bay and posted a mere 1.5 second margin of victory over Locke, Walter, Layton, and Smith.

In the super late model feature, third-place starter Jim Yoder powered into the early lead and was followed by fourth-place starter Coleby Frye into the runner-up position on lap one. On the third circuit Yoder and Frye drag raced down the backstretch with Frye taking command of the field coming out of turn four.

Mattern showed a lot of speed the second half of the race and advanced to second on lap 14. In the final five laps Mattern moved within striking distance using the highline of the race track while Frye protected his lead along the bottom.

With two laps to race, Frye stretched his lead while an intense battle for second developed between Mattern, 10th place starter Bryan Bernheisel, and Schadel. At the finish, Frye took the win  by 3.5 seconds over Mattern. Bernheisel, Schadel, and J. Yoder completed the top five.

Polesitter Shaun Lawton bolted into the lead at the start of the pro stock feature. Lawton was closely chased by fifth-place starter Brad Mitch and third-place starter Tommy Slanker. At the halfway point, the top five drivers—Lawton, Mitch, Slanker, fourth-place starter Kyle Bachman and second-place starter Brandon Moser—were racing nose to tail within seconds of each other.

On the 14th circuit, Mitch made the winning pass using the inside line through turns one and two by Lawton. Mitch went on to score the win by the slimmest of margins and set a new 15-lap track record in 6:02.789, eclipsing his own mark set in 2013.

Second-place starter Smith Cope wired the field for his second win in a row in the roadrunner race but not without a lot of pressure from polesitter Terry Kramer and seventh-place starter Ryan Zook. On a lap two restart, Zook passed Kramer for second and set his sites on Cope.

On a lap nine restart, Cope stayed in front of Zook while a torrid battle for third unfolded behind them between  Kramer, fourth-place starter Jake Jones, and sixth-place starter Bob Bussey.

At the checkered flag, Cope was victorious in a close finish over Zook, Kramer, third-place starter Will Brunson, who had to rejoin the race on the back of the pack on lap two, and Jones.