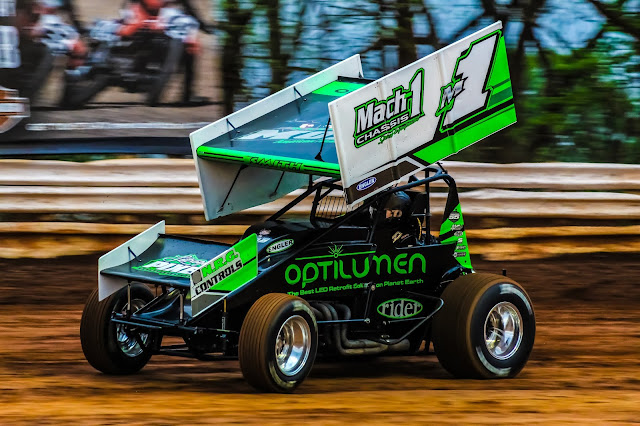 SELINSGROVE, Pa. – Mark Smith of Sunbury turned in a flag-to-flag victory in Tuesday night’s
Firecracker 30 for 360 sprint cars at Selinsgrove Speedway in front of a large crowd that was on hand for the special holiday racing program sponsored by Selinsgrove Ford.

The $3,000 win was Smith’s second of the season at Selinsgrove behind the wheel of the Mach 1 Chassis No. M1.

Bryan Bernheisel of Lebanon inherited the lead in the 30-lap super late model race and held off a late-race challenge for his third win of the year at the track also worth $3,000 over a stellar field of 30 entries.

Shaun Lawton of Bloomsburg drove to an exciting win in the 15-lap C.W. Smith Memorial pro stock race. Lawton collected $1,028 for his third win of the season.

Blane Heimbach was scheduled to start on the pole for the 360 main event but a mechanical issue forced him to rejoin the field at the back of the pack after entering the pit area. The move shifted original third-place starter Mark Smith to the pole for the drop of the green flag.

Smith powered into the front spot and was chased by second-place starter Jason Shultz. By lap two a battle for third developed between fourth-place starter Davie Franek and fifth-place starter Chad Layton.  Meanwhile, Heimbach began to work his way back through the field.

The race’s second caution flag unfurled on lap 11 when Mallie Shuster’s car spun in turns three and four. On the lap 12 restart, ninth-place starter Derek Locke drove into the top five.  The raced was slowed one more time when Reinhardt’s car rolled to a stop in turn two.

On the ensuing restart, Smith stretched his lead only to have Shultz attempt to close it up in the final five laps to no avail. Smith was victorious by 1.94 seconds over Shultz, Franek, Layton, and Locke.

In the late model feature, Jeff Rine started on the outside of the front row and beat polesitter Bryan Bernheisel out of the second turn to take the early lead.  Fourth-place starter Dylan Yoder kept the leaders in his sites as they navigated their way through traffic by lap five.

The race’s first caution flag waved on lap 13 when Billy Wampler’s car developed a flat tire.
When the race resumed, Rine held a solid lead while Bernheisel and Yoder dueled for the runner up position.

On the 20th circuit, Colebry Frye, last Saturday’s feature winner, rolled to a stop in turn one after racing his way into the fourth position. On the lap 21 restart, 10th place starter Brett Schadel and 11th place starter Gene Knaub challenged for the fifth position.

Misfortune struck Rine on lap 24 when his car developed a flat tire. Bernheisel inherited the lead and fended off Yoder to the finish, posting a narrow .69 of a second margin of victory. Knaub, Schadel, and sixth-place starter Shaun Jones completed the top five.

Third-place starter Shaun Lawton powered into the lead at the start of the pro stock main event but had second-place starter Kyle Bachman racing in his shadow. On the third lap fourth-place starter AJ Hoffman took over the runner up position.

At the halfway point, Lawton was the leader by the slimmest of margins over Hoffman, fifth-place starter Brad Mitch, polesitter Brandon Moser and seventh-place starter Tommy Slanker.

A caution on lap 13 for Jake Buck’s disabled race car regrouped the field for a war on wheels to the finish. Lawton came out on top by just .67 of a second over Hoffman, Mitch, Bachman, and Moser.