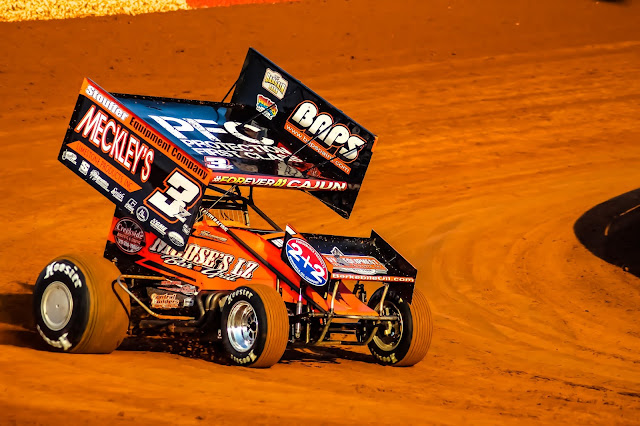 JONESTOWN, Pa. (July 9, 2018) – Although some outcomes resulted in frustration, mostly due to mechanical misfortune, the “Jonestown Jet” Brock Zearfoss successfully completed the 2018 edition of Pennsylvania Sprint Speedweek, entering all ten events conducted between Friday, June 29, and Sunday, July 8. The 2017 Port Royal Speedway champion earned three top-five finishes during the ten-day campaign, highlighting his week with a runner-up finish during his second visit to the Port Royal “Speed Palace” on Saturday, July 7.

In addition to his podium run at Port Royal Speedway, Zearfoss opened Pennsylvania Sprint Speedweek with a fifth place finish at Williams Grove Speedway on Friday, June 29, followed by a third place performance at the narrow highbanks of Path Valley Speedway Park on Sunday, July 1.

Other positive Speedweek results include finishing 11th at the “Fabulous” Lincoln Speedway during the second night of competition in the Pigeon Hills on Monday, July 2, 13th at Hagerstown Speedway on Thursday, July 5, and 11th at Selinsgrove Speedway to end the grueling schedule on Sunday, July 8. When the dust settled at Selinsgrove Speedway, Zearfoss found himself tenth in the final Speedweek championship standings; a great result with all things considered.

“We had some mechanical issues at Grandview and during our first visit to Port Royal that really cut us short of our potential. Regardless, I’m proud of this team and what we were able to accomplish. I have the hardest working crew in the pit area. They stand behind me when things are good and bad, so I thank them for their dedication,” Zearfoss said, driver of the Brock Zearfoss Racing/Moose’s LZ Bar & Grill/Meckley’s Limestone/Central Builders Supply Co./Berkebile Oil Company/BAPS Auto Paint & Supply/No. 3Z sprint car. “To end the week tenth in points is a positive note. I’m proud we were able to make it to every event despite some of the issues that we had. We have a huge weekend ahead. I think we are all more than excited about our trip to Eldora Speedway.”

Up next on the schedule, the “Jonestown Jet” Brock Zearfoss will travel west in hopes of making his home fans proud, ready to challenge the World of Outlaws Craftsman Sprint Car Series during the 35th Annual Kings Royal on Thursday through Saturday, July 12-14.

Certainly no stranger to World of Outlaws competition, Zearfoss is a former main event winner with the Greatest Show On Dirt, beating the national travelers on home turf during action at Williams Grove Speedway.