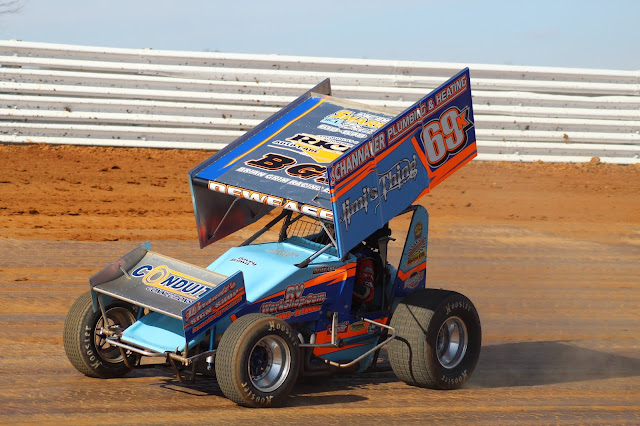 PORT ROYAL, Pa. – The upcoming September 7 and 8 Tuscarora 50 weekend at Port Royal Speedway sanctioned by the All Stars Circuit of Champions Sprints will offer one man a chance to make yet more history in the prestigious 51st running of the Tuscarora race on Saturday night.

The September 8 51st annual Tuscarora 50 paying $51,000 to win at the track will of course be momentous.

The event made history last year by becoming the richest sprint car event ever held at the track by posting a total one-night sprint purse worth over $105,000 including 50K to win.

And the year before in 2016 Lance Dewease became the winningest driver in Tuscarora history when he scored his fifth career event triumph.

And then Dewease returned for an unprecedented sixth win in the race last year in the richest race ever run.

But that win by Dewease last year set up his car owner Don Kreitz Jr. and his No. 69K break another record in 2018.

With the win last year, Kreitz became a five-time Tuscarora 50 car owner champion, which ties him with Al Hamilton and Bob Weikert on the event all time car owner win list.

So the question is, will history again be made when the eyes of the sprint car world again affix themselves to Port Royal Speedway for the huge Tuscarora two-day program coming up in early September?

Presented by Ramsey’s Garage & Car Wash of Mifflintown as well as Packer’s Concessions of Centre Hall, the track marquee Tuscarora 50 event will conclude the weeklong Juniata County Fair that is held on the grounds surrounding the speedway.

The Night Before The 50 will be presented by former area promoter Tedd Reitz.

Orders can be placed by phone during regular business hours by calling the speedway office at 717.527.4414.  Walk-in orders will also be accepted.

Tickets for all phone order customers will be mailed via U.S. Mail through the day on August 23.  All sales beginning August 24 will be held for will-call pick up on the day of the event.

This means that sections A – G will be reserved seating ONLY for the September 8, 51st annual Tuscarora 50, along with rows 12 – 16 in sections H - O.  There will be NO general admission seating in these areas.

Advanced reserved admission seat price for September 8 is $40 for all seats, regardless of age.

The Tuscarora 50 raindate is Sunday, September 9 and as such THERE WILL BE NO REFUNDS of advanced ticket purchases should the raindate need to be utilized.

Day-of general admission prices for the huge All Stars Circuit Of Champions September 8 Tuscarora 50 event have been set at $35 for adults and $20 for students ages 12 - 18.  Ages 11 and under will be free.

In addition to ongoing seat sales, reserved camping spots for fair week are also on sale.

Reservation cost for the entire week is $60.

Keep up to date on all the latest speedway news and information by visiting the speedway’s official website at www.portroyalspeedway.com or by following the oval on facebook and twitter.
Posted by Bill McIntyre at Monday, August 20, 2018