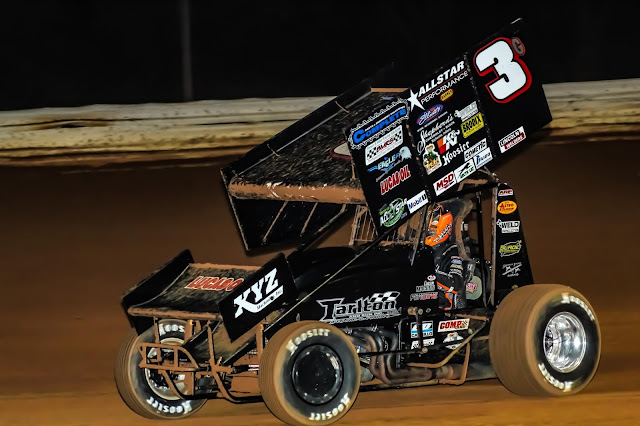 ABBOTTSTOWN, PA 8/25/2018 – The rivalry between the PA Posse sprinters and the rest of the world is real.
“Going into tonight I was just hoping to have a solid run,” Lemoore, CA racer Carson Macedo said after a traditional wing dance in victory lane. “But to get the win, man…!”
21 year old fourth-generation driver Carson Macedo from Lemoore, CA came, saw, and upheld the pride of the traveling All Star Circuit of Champion sprinters Saturday night by picking up his third All Star win of the year, and his first-ever at the Fabulous Lincoln Speedway in the 30-lap $5,000-to-win event.

“To get back into victory lane with the All Stars, it’s been a little while,” Macedo said with a smile in victory lane. “It’s pretty cool…it feels amazing for me, being a kid who grew up in California. Pennsylvania is probably the biggest adjustment by far and after the past few nights of racing I realized the PA Posse guys will beat you down for sure”.

After some years of Posse domination at the Abbottstown oval against all who came to take on the vaunted PA Posse, the All Stars came loaded for bear this night. And there were others.

Also on hand to take on the Posse were former 3-time NASCAR Champion Tony Stewart (2002, 2005, 2011), and current NASCAR and sprint car sensation Kyle Larson. Add Dave Blaney, a former World of Outlaw Champion (1995) and NASCAR racer. So did Western PA racer Tim Shaffer, who is former All Star Champion (2009-2012) and Knoxville Nationals winner (2010).

The field was stout by any standards.

Macedo, a rising star with the traveling All Stars, had picked up back-to-back wins on June 9th and 10th in New York. But it had been nearly a month and half since those wins and he was hungry for one Saturday night. But it wasn’t going to be easy.

Macedo led the opening six laps from his outside front row starting position, only to have third-starting Freddie Rahmer get by him on the 7th lap in lapped traffic.

Macedo didn’t give up though and desperately tried to keep pace with Rahmer who had won the night before against the All Stars at Williams Grove.

Macedo also had to worry about Elk Grove, CA Kyle Larson and Tim Shaffer who were right behind him in third and fourth place respectively nearly the entire distance.
After getting close to Rahmer on a few occasions but not quite able to make the pass, Macedo got his big break, literally.

Entering turn three with three laps to go, Rahmer’s sprinter erupted in a plume of smoke, and slowed to a stop. This handed the lead back over to Macedo with Larson, Shaffer, Aaron Reutzel and 14th-starting Brian Montieth on his bumper.

“Freddie (Rahmer) is obviously really good here and is really good at rotating the bottom,” Said Macedo. “When I saw him get by be in traffic I knew I was going to have pick my marks and hope it opened up a little up there. Luckily it did and I caught back up to him there…but I don’t know if I could have got back around him.

Montieth got the local fans on there feet on the restart as he quickly got around Reutzel for fourth place. But Macedo did not falter the final three laps and took the checkered after 30 laps for the win.

“My crew did an awesome job tonight,” Macedo added. ”We were a little bit off in time trials and just adjusted throughout the night and just got so good as the night went on.”

Larson and Shaffer completed their podium finishes in second and third place. Montieth was the top PA Posse finisher in fourth place and was followed by sixth-starting Reutzel in fifth.

NOTE: The opening lap saw polesitter Tim Glatfelter try to fight off an opening lap slider by Macedo in the third and fourth turns. Macedo slid down and then up in front of Glatfelter exiting the fourth turn. Glatfelter turned down to the inside to retake the lead, only to be met by Macedo who hit Glatfelter’s right rear as the Spring Grove racer was driving by. Glatfelter spun, then flipped over the inside guard rail before coming to a rest halfway down the front stretch. Glatfelter was okay, but done for the night.

Heats for the sprints were won by Adam Wilt, Ryan Smith, Rahmer, and Macedo. Tim Glatfelter won the first Dash while Macedo the 2nd Dash.  Tony Stewart won the B-Main. Fast time in time trails over the 37-car field was set by Larson with a 1-lap time of 13.205-seconds (102.234 MPH).

Mason Chaney finally broke through at Lincoln Speedway in 2018 by leading all 20-laps en route to the win in the 20-lap Central PA Legends feature.

After winning several times at Lincoln in past years, he had yet to find a win in 2018, until Saturday night.

Several early multiple-car crashes jumbled the line-up, Chaney got the lead immediately at the drop of the green from his third starting position and appeared to be well on his way to a comfortable win as the laps wound down.

But seventh-starting Travis McClelland closed on Chaney the final five laps only to come up short and settled for second.

Next Saturday night, September 1st, Lincoln will hold it’s Annual BOB LEIBY MEMORIAL featuring the 410 Sprints, along with the 358 Sprints, and a make-up 358 Late Models feature from June 23rd. FIREWORKS will also highlight the evenings activities. It will also be the final point race for the Lawrence Chevrolet 410 Track Championship.