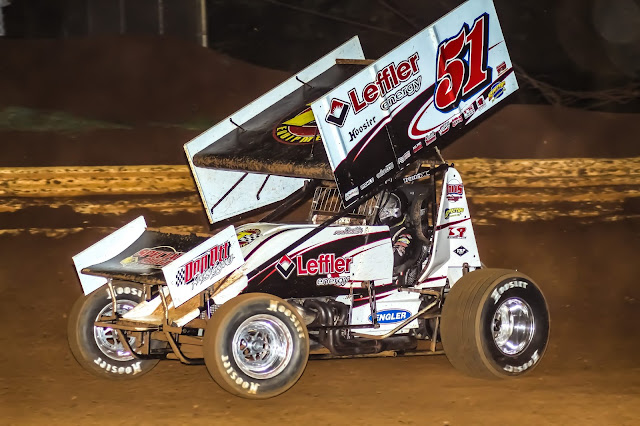 Freddie Rahmer has beaten the best local talent, and the best in the nation. At 22 years old, the third generation racer continues to race beyond his years and out from under the shadow of his legendary father “Fast Freddie” Rahmer.

On a relatively normal Saturday night 410 sprint show at Lincoln Speedway Freddie Rahmer set fast time in time trials. Then started on the pole of the 25-lap feature by luck of the draw after finishing third in his heat. He grabbed the lead at the drop of the green over outside front row starter Chad Trout in the feature and led the entire distance to pick up his third win of the Year at the Fabulous Lincoln Speedway.

But the win wasn’t certain as the hectic non-stop laps wound down.

Trout was doing everything he could to keep pace with the leader. But at the halfway mark Trout bounced off the outside wall exiting the second turn. That opened the door for fourth-starting Brian Montieth.

Montieth took advantage of Trout’s miscue and drove by him into second place heading up the backstretch.

“I figured Montieth was coming,” said Rahmer matter-of-factly. “I seen on the board he was second and I wasn’t doing a very good job in lapped cars at one point…we got it done, but we’ve got to do better for next time if we want to win the big races here, even the normal nights.”

Rahmer, who had registered a magical win over the World of Outlaws a few weeks earlier at the Pigeon Hills oval, had opened up what may have seemed like a comfortable lead of almost three and a half seconds with 10 laps to go.

But as most Lincoln fans know, you never count out the four-time 2018 winner and six-time track champ Brian “The Edge” Montieth.

After 20 non-stop laps it was evident Montieth was closing. Closing fast.

Rahmer and Montieth had to deal with a lapped car as they heading into the first turn. Rahmer did what he had done most of the race, he drove high onto the cushion. Montieth went low.

Montieth suddenly had the lapped car blocking his path and pitched his sprinter sideways to the inside to try and cut some speed. But it was not enough as the back end of his sprinter snapped around in his desperate attempt to avoid the lapped car and came to a stop. The race’s only caution waved. And just as quickly as Montieth’s charge begun, it was now over as he sat in the first turn.
Rahmer was free of lapped traffic, but now had Trout, Kyle Moody, Anthony Macri and Gerard McIntyre right on his bumper for a three-lap shootout.

Rahmer didn’t falter as the green waved and drove to the top of the track and raced unchallenged the final laps en route to his seventh career win at Lincoln Speedway.

“The way the track was there it was only really one choice,” said Rahmer on the 23rd lap restart. “I got the wing front and tried to make good laps on the top…I didn’t go through down here the last lap very good, but it worked out.”

“We’ll improve on that,” said Rahmer quickly added. “Our cars are where they need to be, I just need to be a little better there.”
Trout, who had bounced off the wall hard at mid-race, finished second, with Macri third, Moody fourth, and McIntyre fifth.

Amazingly Montieth rebounded from his 23rd lap miscue and was able to finish 11th as only the top-13 cars finished on the lead lap.

Heats for the 410 Sprints were won by McIntyre, Trout, and Macri, with Matt Campbell winning the consolation. Fast time in time trials over the 26-car field was set by Freddie Rahmer with a 1-lap time of 13.321-seconds (101.344 MPH). 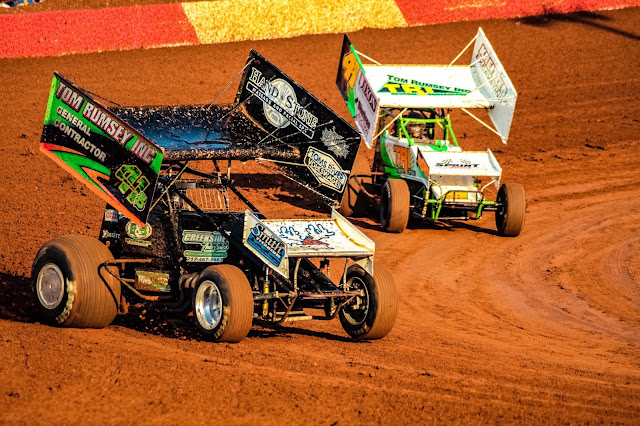 Lincoln University’s Tyler Ross took advantage of race-leader Tyler Walton’s misfortune with three laps to go in the 20-lap 358 sprint feature to pick up his first Lincoln Speedway win of 2018.
Walton, who had picked up his first career win a few weeks earlier, had taken the lead from Ashley Cappetta on the seventh lap and appeared to be on his way for his second win of the year.
Just as Walton was about to get the two laps to go signal exiting the fourth turn he suddenly caught the cushion and was sucked hard into the outside wall, nearly flipping.

At this point Ross, who had started 11th, had worked his way around Cappetta into second place with seven laps to go.

Ross now had the lead for the restart, and like the 410 sprint feature before him, had a three-lap shootout for the win, with Brent Shearer, Cappetta, Jeff Halligan and Matt Findley right behind.
Ross lead the final three laps for the win in his Dick Smith/Tom Rumsey General Contracting No.41B sprinter.

Halligan passed Cappetta and Shearer during the final laps to finish second, with Shearer, current point leader Troy Wagaman, Jr. and Cappetta rounding out the top-five.

Heats for the 22 358 Sprints were won by Gregg Foster, Travis Scott, and Walton.

Next Saturday night, August 18TH, it will be YORK COUNTY RACING (YCRC) CLUB NIGHT featuring the 410 Sprints in a “Shootout” series event and begins the final countdown in the season-long race for the Lawrence Chevrolet 410 Sprint Track Championship with only three (3) point races remaining (8/18, 8/25, 9/1). They will be joined by the 358 Sprints and Street Stocks. Competition Pit gates will open at 5 PM, Spectator Pit Admission & General Admission gates will open at 5:30 PM. Hot laps will get underway at 7 PM, followed by time trials at 7:30 PM.