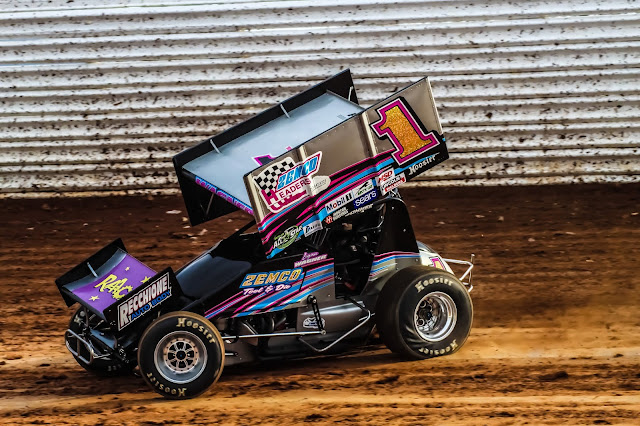 The 18-lap 305 sprint car main was a thrilling event that went non stop with Newport’s Zach Newlin claiming his second oval checkers of the season while Eric Irvin claimed the econo late model main to close out the night.

The first 18 laps of the event would go non-stop before the only caution flag of the race unfurled.

And during those 18 laps, eighth starter Logan Wagner stormed to the front, up to third on the fourth circuit, behind Lafferty.

It took Wagner seven laps to muscle by Lafferty for second before making an attempt to steal the lead.

But a swoop into the third turn shortly after getting second failed to net him the top spot and instead it allowed Whittal to get away during the ensuing laps.

In fact, Whittal was comfortably in front of Wagner’s No. 1 when the aforementioned caution lights came on for a stopped Dylan Cisney on the frontstretch.

Cisney was running in fourth when he blew a right rear tire in front of a challenging Lucas Wolfe with  Wolfe narrowly avoiding major contact.

The caution wiped out a more than one second lead held by Whittal and on the restart, instead of Wagner taking a shot for the win it was Lafferty blasting to the bottom in the first turn.

But Wagner was up to the challenge and held on to second while trying to keep the leader in his sights.

Whittal seemed to be struggling in the turns with five laps to go but still Wagner didn’t close dramatically but then as the pair raced toward the line for the two-to-go sign, Whittal seemed to slip high, allowing Wagner to zoom by for control in a sudden turn of events.

Whittal then zinged down across the track, grazing the inside frontstretch barrier as he worked to keep his wheels underneath all the while losing more spots, to both Lafferty and Wolfe.

Wagner then blasted to the win by 3.897 seconds over the final two laps, followed by Lafferty, Wolfe, Whittal and Jared Esh.

Gene Knaub would lead all 22 laps of the super late model main, most of it with Tim Wilson racing in second.

The red flag appeared on the seventh tour when the cars of Tim Smith Jr., Trent Brenneman and Dillan Stake connected in the third turn.

And when action resumed, Haus zoomed to the low side in the first and second turns to dig by both Yoder and Wilson to take over second with a lap to go.

Haus then shot across the bottom in the first and second turns on the final lap to try to steal the win but his car pushed up the track, allowing Knaub to get away to the victory by 1.060 seconds.

Wilson was third followed by Yoder and Rine. 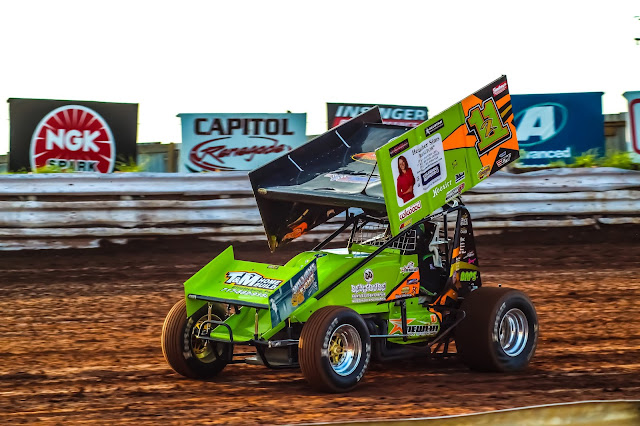 Zach Newlin would win the 18-lap 305 sprint main but only after a wild fracas for the win staged between he, Kyle Smith and Drew Ritchey.

Smith started 12th in the field and rolled around the top groove on the opening lap to be sitting fourth when it was completed.

He battled with Ritchey for the first half of the event for second before taking the spot with six laps to go.

Both he and Ritchey then closed on leader Newlin and raced just off of each others bumpers for the final six laps with Newlin outlasting repeated attempted passed for control by Smith with Ritchey waiting to pounce.

Newlin and Smith were side by side more than once including in the final turns but Newlin won the race back to the line for the victory by .172 seconds.

Derick Garman led the first two circuits of the econo late model main before Tim Krape drove by for the lead.

A restart on lap seven saw Eric Irvin blast by Krape for the lead and win.

Heats were taken by Fedder, Irvin and Toner.