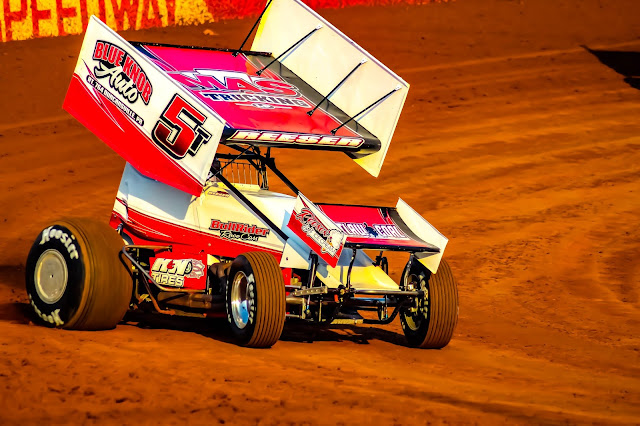 Reeser took $3,600 for the victory and became the 191st sprint car winner in the history of the track.
In the 305 sprint car main, John Scarborough of Bomoseen, Vermont, came out on top of a thrilling event that saw him lose the lead to Darren Miller and then reclaim the spot late to hold off Miller and Kyle Smith in a wild three-car chase to the checkers.

Trenton Sheaffer of Richfield took the lead at the start of the 25-lap 410 sprint car main chased by Reeser, who started second.

Reeser chased Sheaffer for the first seven laps before he pulled the trigger with a third turn dive to take control of the event.

The feature would go non-stop from start to finish with Steve Buckwalter driving into the second spot with nine away while point leader Greg Hodnett took third on the 10th tour.
At the halfway point, Reeser held a 1.558 second lead over Buckwalter as the front-runners raced through traffic.

Reeser’s preferred line was high and outside as he blasted around the track although he broke off of the groove to get by traffic when needed.
His top lane kept getting higher and higher however as the race neared the finish and on the final lap he did tag the wall without damage.

In his rookie year behind the wheel of a 410 sprint, Reeser took the win by 3.040 seconds over Buckwalter with Hodnett finishing third followed by Mike Wagner and Lucas Wolfe.

John Scarborough raced into the lead from the pole at the start of the 18-lap 305 sprint feature as Darren Miller motored into second on the second lap.

The leader hit traffic on the ninth tour with Miller in tow and four laps later Miller used the outside in the first and second turns to get control as Scarborough tried to negotiate heavy traffic.

Miller had made attempts during the prior laps only to see Scarborough persevere at the line.

Seventh starter Kyle Smith raced into third on lap 13 and was giving chase of the leaders, whom he caught during the final three circuits.

For the last mile and a half, Smith used all his ability to find a way through and around the duo of frontrunners but at the same time, Miller and Scarborough were racing side by side for the win with Scarborough finally gaining an edge with two laps to go.

Back to the line for the finish, Scarborough took the win over Miller and Smith with Austin Bishop and Drew Ritchey completing the top five.

Series point leader Steve Drevicki started sixth in the field and drove up to second on the eighth tour before setting his sights on the leader.
Drevicki drove down a sizeable advantage held by Bitner during the ensuing laps but failed to challenge for the win, coming up .617 seconds short at the finish.

Heats went to Leiby and Strada.