Russ Mitten breaks through to victory lane for 1st win of 2018 at BAPS Motor Speedway. 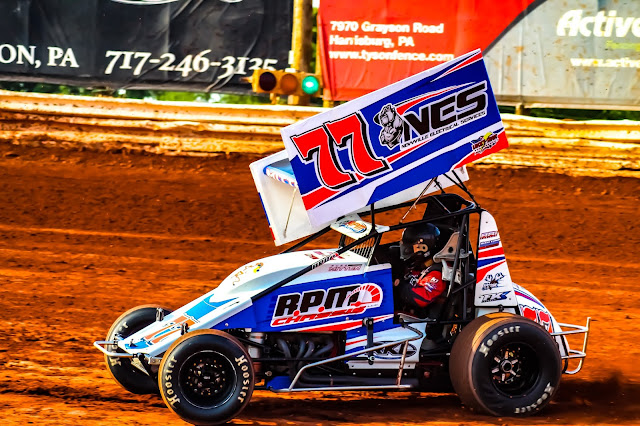 YORK HAVEN, Pa.: Success in racing isn’t just about a car and how it performs. Regardless of the level or prestige, the driver need to be confident.

Russ Mitten’s confidence was rattled a bit throughout the 2018. After a string of early top-five finishes, the Newville driver struggled, at times, to even make the Super Sportsman A-Main.

But that all changed Saturday night at BAPS Motor Speedway. Mitten was back to normal, riding on the cushion and storming to front, which is just what he did to capture the 25-Lap Super Sportsman feature.

“You lose confidence when things aren’t going so good,” Mitten said. “You’ve got to have 100 percent confidence in that car that it’s going to stick, and you aren’t going to be in the planks.

“The further that race went on, the more confident I got, and everything came back to the way it should. But I’m not going to lie, there was a point in the season when there wasn’t much confidence, and we were just hoping to make a feature and finish a feature.

“To finally get a win here, it’s pretty exciting to be here with my family. I stood in Victory Lane with Jim Siegel last night at Williams Grove with a brand, new car I built and to win here tonight in my car, it’s pretty special.”

Steve Fannasy started fourth on the grid but got to the front in a hurry, blasting into the lead by the completion of Lap 1.

Mitten, who started eighth on the grid, had to be more patient. He was into the top five early on, but he struggled to clear Bruce Buckwalter Jr. and also had to fight off Paul Miller for position in the middle stages of the race.

“I thought we were decent, but through the middle of the race, I’m thinking I hope I hold on for third or fourth, because it started going away a little bit,” Mitten said. “Maybe I wasn’t hitting my marks quite right, because this is the first time I’ve run 25 laps in about two months.

“I kind of got a little flustered when I was trying to get by the 83 [Buckwalter]. I kind of lost my rhythm there, and the 58 [Miller] got outside of me, and we ran side-by-side, and the outside is where I needed to be.”

Mitten got the break he needed on Lap 19, when Luke Detrick stopped. That set up a restart that Mitten used to get to the front.

He got past Buckwalter and into second to have a clear shot at Fannasy. The laps were winding down, and Mitten was strategic in getting Fannasy to move off the bottom, so he could blow by to take the lead with two to go.

“When the caution came out toward the end of the race and I got to restart fourth, I knew it was on,” Mitten said. “If I could hit my marks and rattle up the 11 a little bit, he would protect the bottom.

“I showed him my nose on the bottom — trust me, that was on purpose — and he took the bait. He went to the bottom the last two laps, and that was it.”

It was, and Mitten owned the last two laps to take the win over Scott Dellinger, who came from 11th to finish second.

Buckwalter held on for third, with Mike Enders and 17th-place starter Kenny Edkin completing the top Five. Garrett Williamson was the ArtWerks Hard Charger after advancing from 20th to sixth.

There were five cautions over the race distance, which gave Bobby Beard multiple cracks at taking the win. In each case, Shuey was able to drive away and hold off his fellow competitor.

Donnie Broderick led Lap 1 before Travis Horan took over the second circuit. He led through Lap 14, before Rial, who started seventh, carved his way to the front and led the last six laps.