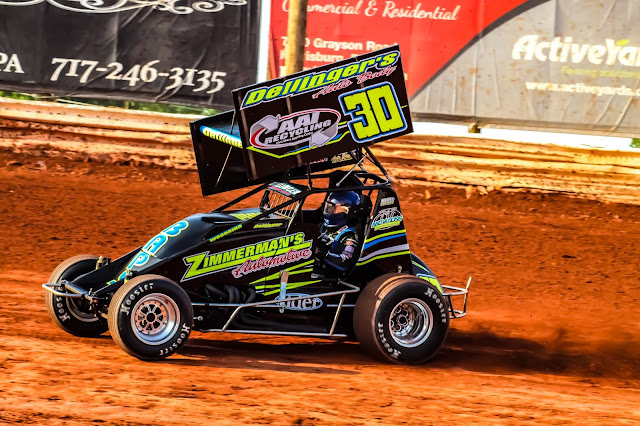 YORK HAVEN, Pa.: Rain nor a shortened Super Sportsman feature can keep Scott Dellinger out of Victory Lane.
The Lewisberry standout charged to the front in a hurry and collected his seventh Super Sportsman victory of the season at BAPS Motor Speedway. The event was scheduled for a 25-lap distance but was called after 13 circuits due to rain.

But Dellinger made the most of those 13 laps. He started ninth on the grid and surged into the top five in the first few laps, following eighth-place starter Frankie Herr past the competition.
Herr took the lead from Bruce Buckwalter Jr. on the eighth circuit. Dellingered also slipped past Buckwalter and tracked down the leader.
Dellinger stalked Herr and made his move on Lap 12. The defending track champion and current point leader went to the outside of Herr coming out of the fourth corner and had the lead at the stripe.

After Chad Criswell rolled to a stop to bring out the second caution of the event, rain hit the speedway. Dellinger was declared the winner, because the main event was past the halfway point.


The PASS/MASS 305 Sprint main event will be run on Aug. 26 as part of the Justin Snyder Salute to the Troops presented by Dover International event. Tony Stewart’s Arctic Cat All Star Circuit of Champions will also be part of the event.

The Central Pa. Legends series will also make up their main event on a date to be determined. Scott Smith had quick time with a lap of 22.883. Heat winners for the 37-car field were Scott Smith, Greg Burd, Harlon Leppo, and Zac Smith. Jorge Sweger won the consolation.