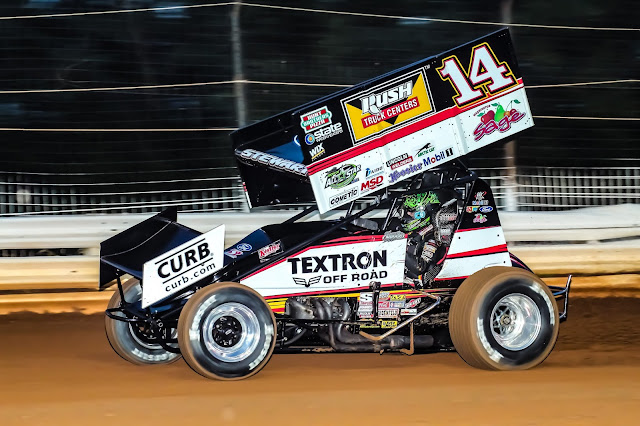 Not only is he still competitive, he is a contender against some of the best Sprint Car drivers on the planet.
Stewart found the middle of the speedway to his liking in the early stages of the 30-lap main event and was the class of the field in claiming the Arctic Cat All Star Circuit of Champions Justin Snyder Salute to the Troops presented by Dover International Speedway.

“That’s a big win for us,” Stewart said. “When we won at Pittsburgh Pennsylvania Motor Speedway last year, we had around 24 cars. But when you come here in the middle of Posse country against these guys and win, you are doing something.”

Stewart started fifth on the grid, but he wasn’t a factor … at least not right away. Instead, it was Kyle Larson rocketing around the top to set the pace over Paul McMahan and Carson Macedo.

The pace was slowed on the third circuit when Anthony Fiore flipped in Turn 1. Danny Dietrich and Kyle Reinhardt also rolled to a stop. During the red flag, Larson went to the pit area when his car wouldn’t go into gear.

McMahan was blowing around the top of the speedway and opened up a 1.672-second lead by Lap 10. One lap later, Kyle Reinhardt slowed on the frontstretch to bring out the caution for the second time.
Stewart, meanwhile, remained in fifth. On the Lap 11 restart, he positioned his car in the middle grove drove past Aaron Reutzel to take fourth.

“I just started moving around a little bit,” Stewart said. “I quit going wherever everybody else was going and just moved to a line they weren’t running. That’s something Donny Schatz does so well.

“I found a spot that worked for me. I knew the top was probably a little better, but I knew as the race went on, it was going to be harder and harder to be good on the top.

“When I found that middle, guys were still making good laps up top, but I was breaking even with them at each end or gaining a bit. I figured I was in a good spot, I just didn’t know if that lane was going to hang on the rest of the race.”

While Conley and Macedo battled for second, Stewart closed the gap. He shot to the bottom of Turns 3 and 4 and drove by both competitors to take over the second spot by the completion of Lap 14.

“Carson got a good run on the top, and I felt I got a better run off the top,” Stewart said. “Cale got a little crossed up on the exit and broke his momentum enough for me to get a big run.

“I had to go clear to the bottom to do it, but you don’t get many chances with these guys. When you get by Carson, Aaron, and Cale, it’s a lot better odds when you get to second like that and can race a guy one-on-one for the lead.”

McMahan was setting a pretty good pace around the top and maintained a 1.024-second lead at the halfway point. But, that advantage was erased when Tyler Esh spun at the exit of Turn 2.

Stewart nailed the middle on the restart and stayed with McMahan. By the completion of Lap 17, the two frontrunners were nose-to-tail at the flagstand and steamrolling toward Turns 1 and 2.

The former NASCAR star pulled the trigger on Lap 18, sliding past McMahan in Turn 1 and holding the lead at the exit of Turn 2.
Once out front, Stewart was never challenged. McMahan was within .525 second on Lap 21 but lost another three tenths by the time Lap 25 was scored.

“I felt like the longer we went, we got a little better the last 10 laps,” said Stewart who took the checker by 1.191 seconds. “I liked the spot I was at on the racetrack, and I just had to not overdrive and not do a couple of things I know not to do. "I needed to slow down to go faster. Once I found that spot again, I got in a rhythm and pattern and felt like I was in good shape.”

Conley came on strong at the finish. He dipped underneath McMahan on Lap 28 and won a three-car battle with Lance Dewease to finish second.

Dewease, who started 13th, also surged past McMahan on the final lap for third. McMahan and Reutzel completed the top five.

Reutzel set quick time with a lap of 14.949. McMahan, Brian Montieth, Larson, and Macedo were heat winners for the 34-car field. Danny Dietrich won the B-Main and was named hard charger in the main event.

Newlin started eighth on the grid and had a shot at the win at the end, but Grube was too much out of Turns 3 and 4 and won by a nose. John Scarborough, Andy Besst and Jaremi Hanson completed the top five.

In the 305 Sprint Car nightcap, Newlin started fifth and took the lead from Rick Stief on Lap 3 and
cruised to the win. Darren Miller finished second, followed by Alex Schanz, Kyle Smith, and Stief.