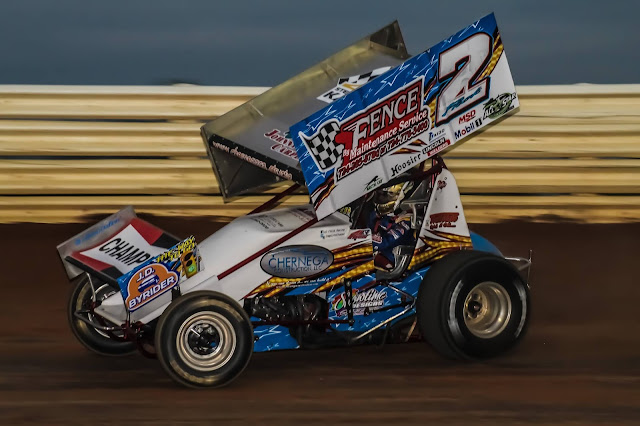 9/1/18
PORT ROYAL, Pa. – AJ Flick of Apollo became an official member of the Pennsylvania Posse on Saturday night at Port Royal Speedway, taking his first career Port Royal Speedway and Central Pennsylvania sprint car victory worth $3,600 in the 164th annual Juniata County Fair Opener.
To get the win, Flick had to pass Joey Hershey and Steve Buckwalter for the lead and then outrun and hold off Lance Dewease.

In the 33-lap Butch Renninger Memorial for ULMS super late models, Tyler Bare of Rockridge Bath, Virginia, took the victory worth $4,861 including lap money.
The econo late model Renninger Memorial was taken by Derrick Garman while Will Brunson scored the Renninger event for the xtreme stocks.

Those were the words AJ Flick exclaimed after crawling out of his No. 2 sprint car in victory lane, having just run the race of his career at the track. Flick started second in the 25-lap feature event but allowed polesitter Tyler Hershey to take control at the start with Steve Buckwalter in third.
Flick lost second to Buckwalter on the second tour but then regrouped for his run at the front, passing Buckwalter back for the spot with four away.

The first caution flag of the race unfurled on the sixth tour and Flick pounced on the restart to get command and go to work on the cushion. Lance Dewease started ninth in the field and was up to fifth by the fourth lap. On the same restart that Flick took the lead, Dewease drove into third and then took second on the eighth lap.  Flick meanwhile was working traffic by the halfway point with Dewease in tow but he held a .634 second lead at the stripe on lap 13.

However Dewease was making good time on the bottom and Flick was not and when the leader went to the inside of a backmarker to put him a lap down in the second turn on lap 15, Dewease drove by for control as Flick slid up across the track to catch the cushion.

At that point the race could have been considered over, now in the hands of Dewease but Flick got a reprieve when the caution appeared for a stopped Justin Whittal before the lap could be completed.
So Flick went back to the point and it would not be an opportunity he would waste as he took the new green, using the high line in the first turn to get away from Dewease.

Dewease too stuck to the cushion for the duration of the event and with less than three laps to go, Flick again was in traffic but everything went his way, with Dewease unable to mount a challenge to the finish.


Ross Robinson of Georgetown, Delaware, took the lead at the start of the Butch Renninger Memorial 33 for ULMS late models and held sway for the first 16 laps, driving uncontested for the lead until disaster struck in the second turn. As Robinson set his car into the corner, he clouted the outside wall and lost a wheel, which turned the point over to Tyler Bare. Bare had started sixth in the field and took second from Roy Deese Jr. on the ninth tour.  Bare jetted away on the restart and had a straightaway lead with nine laps to go while Deese and Jeff Rine battled for second.
Late in the race, Jason Covert got by Rine for third and battled with Deese for second before again losing the spot to  Rine. Bare ended up winning his first career Port Royal event by 7.052 seconds over Covert with Rine finishing third followed by Covert and 17th starter Kyle Hardy.

Yoder holds a 20 point lead over Jeff Rine in the track title battle going into the final point race on September 7.

Derick Garman ended up winning the 22-lap econo late model feature event but only after taking the lead from Todd Snook. Snook took the lead from his fourth starting spot on the opening lap before enduring six restarts as the leader. Andrew Stotler chased Snook for the win for most of his run at the front before he collided with Tim Krape while the pair raced for second on the 11th tour.

Garman went to work on Snook on a lap 12 restart and finally took the top spot on the 14th lap.
Devin Hart worked into contention late, taking second with a lap to go but coming up short on a final lap restart. Garman took the win by .715 seconds over Hart, followed by Andrew Yoder, Todd Snook and Steve Campbell.