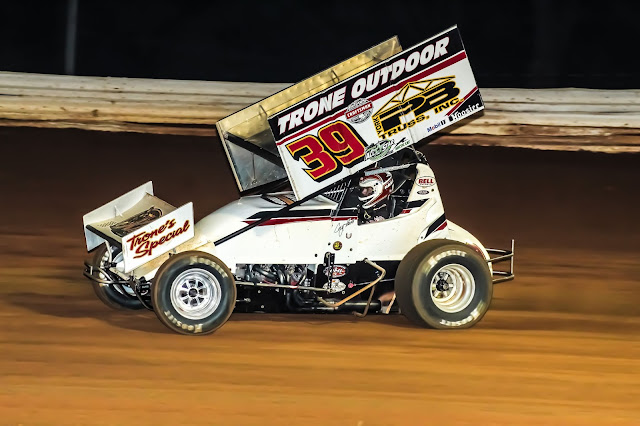 Brandon Rahmer and Cory Haas shared the front row for the start of the feature.  Haas was in front in the first corner with fourth-place starter Lucas Wolfe moving into second.

By the fourth lap, Haas had a 10-length advantage.  Within the next two laps, Wolfe narrowed the lead down to three lengths.  During the ninth lap, the lead duo encountered slower traffic.
Haas used the traffic to lengthen his lead over Wolfe. Wolfe was able to narrow the lead when free of traffic.  Wolfe tried the inside while working traffic.  Haas was able to use the slower cars to strengthen his lead. While the lead duo were in traffic, sixth-place starter Greg Hodnett advanced into third.

The only caution of the event came on the final lap when Anthony Macri’s car drifted to a stop on the front straightaway. The restart found Haas taking the high line in the first turn with Wolfe on the bottom.  Haas held the lead into the third corner.  Again Wolfe tried the bottom but Haas had the momentum off the fourth turn and crossed the finish line two lengths in front of Wolfe.

Greg Hodnett was third, with Brian Montieth in fourth, and Brandon Rahmer was fifth.

“We knew we had to win that heat race to have any shot of winning the race,” said winner Cory Haas.

“There’s too many good cars and the track is just a little bit too quick.  It is hard to pass.  I saw Lucas there once or twice in lapped cars.  Once I cleared lapped cars I felt pretty good.”
Brian Montieth received the Beer Hill Gang Hard Charger award.  Montieth started 12th and finished in fourth.

Brandon Rahmer and Cory Haas won the qualifiers for the 19-car field. 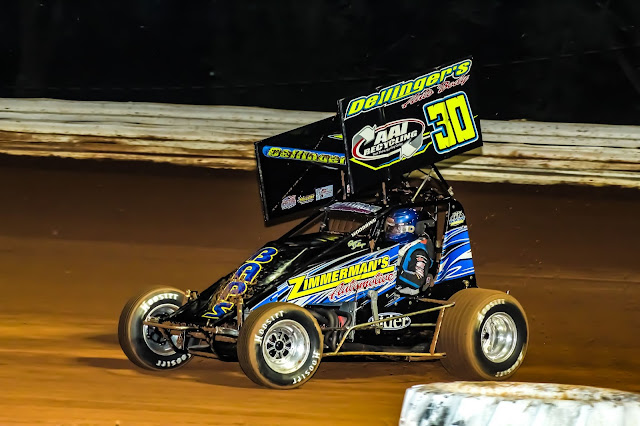 Scott Dellinger was on the pole for the start of the 20-lap Super Sportsman feature.  Dellinger led from the start with Kenny Edkins in pursuit.

By the third circuit, 10th-place starter Frankie Herr was in fourth.  Two laps later, Herr’s car had a flat left rear tire sending his machine into a spin on the back straightaway.

Several cautions slowed the field.  On each restart Dellinger used the low line to hold his lead.

By the midway point of the feature, Dellinger maintained his lead with Edkins three lengths behind.  Dellinger was having issues as his car lost its brakes.  Despite the problem, Dellinger began to lengthen his lead.

The remainder of the race was caution-free.  Scott Dellinger was the winner by 10 lengths over Kenny Edkins.  Mike Enders was third, with Jay Fannasy in fourth, and Russ Mitten was fifth.

The feature win for Dellinger is his eighth of the season.