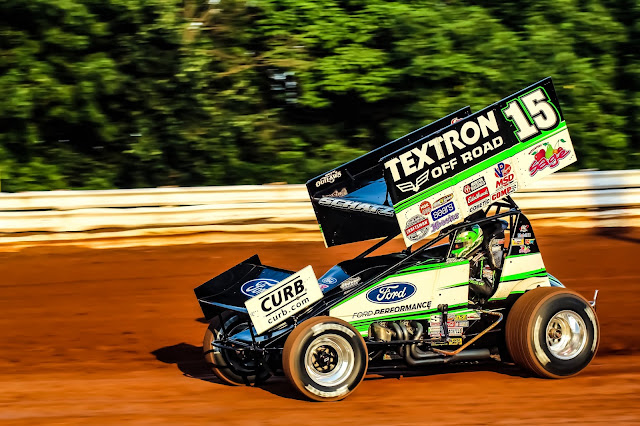 ELMA, WA – September 3, 2018 – Donny Schatz continued his recent dominance at Grays Harbor Raceway, leading all 30 laps en route to his 18th World of Outlaws Craftsman Sprint Car Series Victory of the 2018 season and fourth in his last five starts at Grays Harbor. Daryn Pittman threw everything he had at Schatz but settled for second with David Gravel surging late to complete the podium.

Schatz won the Sears Craftsman Dash, earning the pole for the 30-lap affair around the high-banked 3/8th oval alongside Sheldon Haudenschild, who was making just his second start at the Elma, WA facility. Schatz and Sheldon put on a show battling for the lead throughout the first five laps, exchanging slide jobs, trading lines and using the entire racing surface.

The caution came out with five laps complete for Brent Marks, who hit the infield tire and busted his front axle, ending his night. Although Haudenschild led momentarily on two occasions, Schatz officially led all of the first five laps and maintained the lead on the double-file restart.

Schatz elected the bottom, putting Haudenschild on the cushion. Haudenschild ventured out wide and tried to get a run on the restart but subsequently left the door open for Logan Schuchart, who restarted fourth, to cut to the middle and halt Haudenschild’s momentum causing him to fall back to fifth as Schuchart, Daryn Pittman and Brad Sweet passed the young Wooster, OH native by the backstretch.

As Sheldon tried to recover, Sweet, Pittman and Schuchart waged war for the second spot, allowing Schatz to pull away. Pittman established himself in the position by Lap 7 and set his eyes on Schatz.

With a long Green Flag run, Schatz was able to showcase his premier ability to navigate lapped traffic. Schatz was strong on both the cushion and down low hugging the berm, allowing him to move through traffic at a quick pace. Pittman was equally strong though, closing the gap on the nine-time Series Champion ever so slightly each lap.

The caution flew with eight laps remaining for Andy Caruana, who fell off the pace down the backstretch.

The ensuing double-file restart saw Pittman go for gold into turn one and attempt to slide Schatz. Pittman couldn’t clear the Tony Stewart Racing No.15 and left the bottom open off turn two for Sweet to get a run. Pittman fended off his fellow Kasey Kahne Racing teammate to secure the second spot, but the laps were winding down to reel in Schatz.

As Pittman tried to chase down Schatz, Logan Schuchart and Brad Sweet had a hellacious battle going for third, with Schuchart sliding in front for good with four to go.

As the leaders were coming to the White Flag, Caruana slowed drastically on the frontstretch, forcing both Schuchart and Sweet to take evasive action. Both Schuchart and Sweet did 360’s in the infield and kept going while Caruana brought out the Yellow. Sweet and Schuchart both had wing panel damage and unfortunately for Schuchart, he also had a flat left rear that would force him to the pits, relinquishing third. The caution was for Caruana and Sweet never came to a stop, so he was given his spot back, with noticeable wing damage.

With less than five to go in the Feature, the restart was single-file giving Pittman one last chance to steal the win from Schatz. Schatz entered turn one high and Pittman followed him, leaving the bottom open for David Gravel, who surged from fourth across the bottom. Pittman checked up anticipating a full slider from Gravel, allowing Schatz to secure the victory for the fourth time in the last five Outlaw visits to Grays Harbor.

“The track was really good, you had to move around to get through traffic. I actually wish we would have stayed in lapped traffic more, that’s when it gets really fun,” Schatz said in Victory Lane. “I don’t know any driver that wants cautions,” Schatz added about the Green-White-Checkered finish. “I was hoping we could stay in lapped traffic because my car was good all over the race track and that I can attribute to my guys.”

Pittman, who won Saturday at Skagit, settled for second and kept it simple. “He’s tough to beat. I was hoping he would get slowed up behind the 96 and I would be able to get a run, but then it took me longer to get by him than I would have liked,” Pittman said about the lapped traffic before thanking his crew and car owner Kasey Kahne for the opportunity.

David Gravel was pleased with third, but wish he had 10 more laps to work with. “The track was really fast, hopefully we can get some momentum and build on this. I have two new crew guys - Tyler and Andy - so I thank them and Barry for their hard work,” Gravel said in good spirits.

Sheldon Haudenschild charged late to fourth with Brad Sweet fading to fifth with his damaged car. Greg Wilson picked up KSE Hard Charger honors coming from 17th to ninth. Logan Schuchart set a New Track Record in Qualifying with a lap of 11.699 and was poised for a podium finish before getting into the lapped car of Caruana.

The World of Outlaws Craftsman Sprint Car Series continues its 40th Anniversary Season with the Series lone visit to Oregon on Wednesday, September 5 when The Greatest Show on Dirt stops at Willamette Speedway in Lebanon. Tickets are still available for the event here. If you can’t make it to the track, watch all the action LIVE on DIRTVision.com!