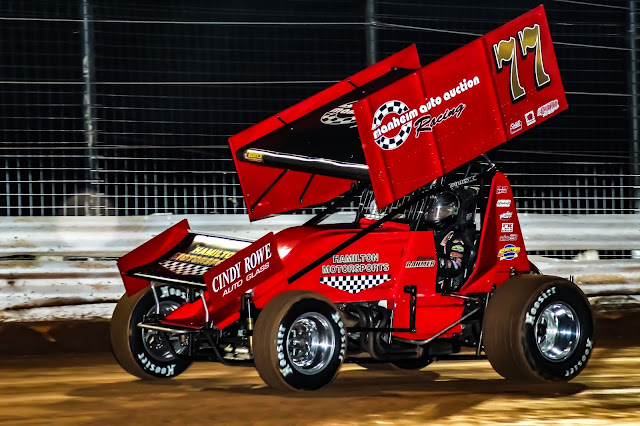 The 30—lap main in honor of Half of Fame car owner Al Hamilton of Manheim paying $5,077 to win will now be completed on Friday, September 21 as part of the regularly scheduled World of Outlaws tune up event for the 410 sprints.

The postponed 358 Sprint Summer Series event that was to be held on Friday night will also be made up next week, on September 21.

Circumstances createad by the rains have now set up what will be a can't-miss event at Williams Grove Speedway on September 21 as the oval hosts complete programs for both the 410 and 358 sprints along with both make up feature events.

Starting time on September 21 has been moved to 7 pm.

Due to all qualifying being completed on September 14, rainchecks will not be honored at any future racing events.

Before the rains on Friday night, as the 410 sprint Hamilton Tribute feature began, second starter Greg Hodnett had taken the lead while fourth starter Lance Dewease raced up to second.

But before the entire first lap could be completed, a seven-car fracas unfolded in the fourth turn involving the cars of Adam Wilt, Chase Dietz, Jim Siegel, Jared Esh, Kyle Moody, Freddie Rahmer and Cory Haas.

And then while awaiting a return to action following accident clean up, persistent and moderate rainfall soaked the track, forcing postponement of the balance of the night’s racing.

Heats for the 410 sprints went to Hodnett, Lucas Wolfe and Chad Trout with the consolation race going to Robbie Kendall.

Heats for the 358 sprints went to Matt Findley, Cody Keller and Gregg Foster.
Posted by Bill McIntyre at Saturday, September 15, 2018