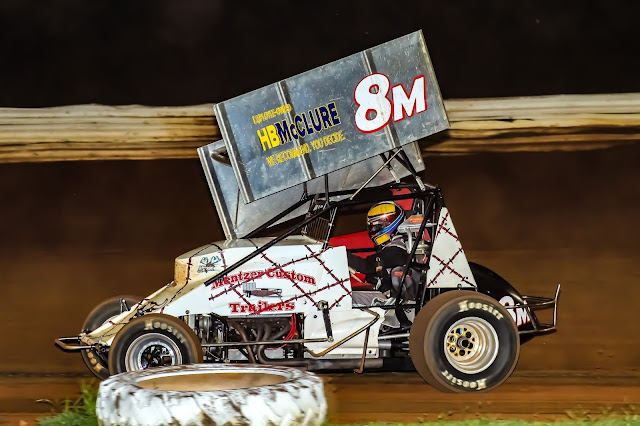 YORK HAVEN, Pa.: A week ago, Chris Meleason felt he had enough speed in his car to contend for a victory at BAPS Motor Speedway.

He just didn’t get to show it. Not after a faulty ignition box took him out of the running for a good finish.

But that wasn’t the case this week. Meleason shook off some issues after his heat race and dominated the Super Sportsman main event, wiring the field in leading all 25 circuits on Saturday night.

“These guys have been working real hard,” Meleason said. “We had to take some time off and got a motor put in the car … just going at it to get another new car ready to go.

“We got it figured out pretty quick and cheated some bad luck tonight. We had an oil leak after the heat, and these guys worked their butts off to get us out for the feature. We didn’t know how it would turn out, and it turned out pretty good.”

Meleason started on the outside pole and got the jump on Steve Fannasy, blasting around the outside to set the pace.

That was a common theme over the race distance. Meleason in his comfort zone with the right rear on the cushion buzzing around the top to build a one-second lead by the time Lap 5 was scored.

“That’s where I’m comfortable running,” said Meleason of running the lip around BAPS Motor Speedway. “I’m not one that really likes to be on the bottom, so when it’s up there, I always take advantage of it.”

Meleason was able to stretch his lead but had it wiped out on Lap 15 when Luke Deatrick stopped. That gave Fannasy a clear shot at the leader and a chance to steal away the win.

Didn’t happen. Meleason took off but had his pace slowed two laps later, when Davey Walsh spun.  Fannasy came after the leader on the restart but had nothing and was forced to run for second.

“We had a feeling with how good the car was last week, that if we could just get a night when everything came together, we knew we would be up there contending for it,” Meleason said. “It feels good to get back to Victory Lane.”

Reinhardt, who started fourth, took the lead from Chuck Hebing on Lap 5 and led the next four circuits before getting over the cushion. That allowed Smith to close and take the lead on Lap 10.

From there, it was all Smith. He dominated the rest of the event, driving away from Hebing on a pair of late restarts to take the win. Hebing finished second, with Reinhardt, Davie Franek, and Derek Locke completing the top five. Adam Carberry, Franek, and Jimmy Stitzel were heat winners for the 23-car field.

Johnny Scarborough raved about the BAPS Motor Speedway racing surface after collecting the victory in the 20-lap PASS/IMCA 305 Sprint feature.

There was plenty of reason for praise, as Scarborough drove from ninth to the lead and dominated the event.

John Walp started on the outside pole and led the first nine circuits. Scarborough wasted little time getting to the front, blasting into the lead at the halfway point of the main event.

Scarborough led the rest of the way and took the win. Nick Sweigart, Kyle Smith, Billy Ney and Donnie Hendershot completed the top five. Scarborough, Walp, and Smith were heat winners for the 22-car field.

Chad Smith took the lead on Lap 4 and was victorious in the Morgan’s Paving/Aqua Fun Pools Street Stock feature.

Brian Walls led the opening circuit before Jasen Geesaman took over and led through the completion of Lap 3. Once Smith took over on Lap 4, he led the next 16 laps to take the win over Geesaman.
Brian Walls, Will Walls, and Kyle Saylor completed the top five. Geesaman and Smith were heat winners for the 16-car field.