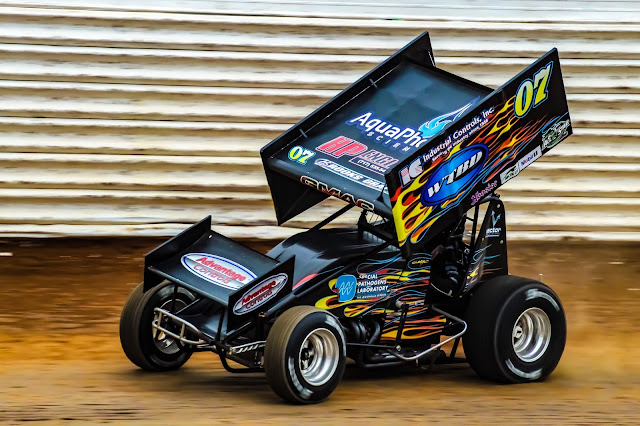 A few years ago, McInytre led over the half the laps in the main event before making contact with a lapped car. Not only did it take him out of contention, it cost him a fat payday.

McInytre made up for it Saturday night, when he slipped by Trey Starks and drove away to an impressive and satisfying $5,000 victory in the 27-lap SprintCarUnlimited.com Sprint Showdown.

“Anytime you win in central Pennsylvania, it’s huge,” McIntyre said. “This is the biggest race of the year at Susquehanna [BAPS Motor Speedway], and it will sink in eventually.

“I got close to winning this a few years ago, and it’s been in the back of mind what I could’ve done differently. Sometimes, you just need everything to go right, and somehow tonight, it did.”

A red flag marred the early stages of the event, when Dylan Cisney and Danny Dietrich got together on Lap 2 coming out of the second corner. Cisney got upside on the backstretch, and Dietrich went to the pit area with a flat and rejoined the field at the rear.

Starks took advantage of his outside-pole starting spot and raced ahead of McIntyre and Bradley Howard through the early stages of the event.

The leaders caught the back of the field by Lap 6. Starks owned a 1.548-second lead, but McIntyre closed on the low side and poked his nose under the leader in the first corner on the 10th circuit.

“The car didn’t feel as good to me as it really was, and that’s a weird feeling,” McIntyre said. “Darren had the car rolling around here, and this place is a little tricky when it builds a big cushion.

“I think that bit Trey a little bit. Being in second, you can move around a little bit and see that stuff … It was just a hell of a night.”

It got even better on Lap 11, when McIntyre wheeled through the first and second corner and wrestled the lead away. Starks retook the top spot on the backstretch, but McIntyre pulled off the slider in Turns 3 and 4 to lead the lap.

McIntyre wasted little time distancing himself from the field. By Lap 15, he built a 1.731-second advantage over Starks, who was struggling to stay ahead of the hard-charging Tyler Esh.

Lucas Wolfe, who started 14th on the grid, blasted into the top five by Lap 15. One lap later, he took fourth from Howard and closed on Esh.

Esh and Wolfe traded third in the Turns 3 and 4 on Lap 19. But, Esh continued to hold the spot and nailed the low side in Turns 3 and 4 one lap later to blow by Starks for the runner-up position.

Catching McIntyre would be much harder. Especially since he owned a 3.385-second lead over the field with two to go.

“When Trey got out front, he jumped out to a big lead,” McIntyre said. “Once he got into traffic and the dirty air, he slowed up a lot more than I did. Lapped traffic was tough, and once I caught him, I knew I needed to be a little bit patient and work around instead of trying a slider and taking out two cars.

“I knew a lot of guys got crashed out early, so I had a couple laps to play around a bit. Once I drove around him through the middle, it was a matter of staying off that curb.”

McIntyre was flawless over the final two circuits and cruised to an easy 3.239-second victory over the field.

“The clean air is everything in these cars, and you just have to be able to work through the dirty air,” McIntyre said. “Once I cleared those four or five lapped cars, the track was wide open.

“You get all that good air on your wing, and that in turn makes your car better. There was nothing better than the last couple of laps and not seeing anybody in front of me.”

Continued McIntyre, “Three or four years ago, I led three quarters of the race and tangled with a lapped car. I came back to get eighth, or something like that, but that one hurt. This one makes up for it and makes me feel better.”

Esh held off the Wolfe for second. Kyle Moody was fourth, followed by Starks, who fell to fifth in the final rundown.

McIntyre set quick time for the 23-car field with a lap of 14.906. Kyle Moody, Dan Shetler, and Esh were heat winners.

Doug Hammaker started the night off with a dominating victory in the 25-Lap Nouse Summer Series event for the 358 Sprint Car Summer series.

Hammaker took the lead on a Lap 10 restart from Kevin Nouse and was cruising. He took the win by 6.375 seconds at the finish and lapped up to eighth place over the race distance.

In the regular 358 Sprint Car, Nouse bounced back to make a late-race pass on Steve Kisamore to secure the win in the 27-lap event.

Kisamore led the entire way, but a caution came out with one to go, setting up a dash to the finish. Nouse took advantage of the double-file restart and ripped around Kisamore to take the win. Wagaman, Drevicki, and Dylan Norris completed the top five.