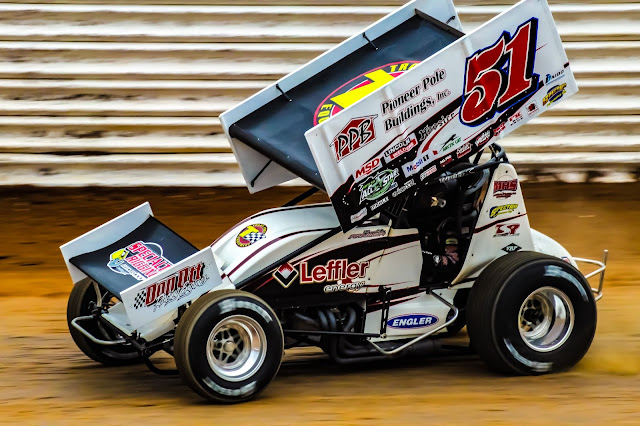 For Rahmer, the win was his second in a row, worth $4,000, after he also took The Night Before The Tuscarora 50 in September.

Watt, of Boyertown, started 10th in the 40-lap Speed Showcase for the STSS modifieds but waited until two laps to go in the main to drive into the lead.

Duane Howard led the first 16 laps of the race before exchanging the top spot with Dave VanHorn before VanHorn took the spot and held it on the 18th tour.

But sixth starter Brandon Grosso, who had fallen backward at the start, was circling the track on the high side and steadily moving to the front and had VanHorn in his sights.

He rode around the outside of VanHorn on the 21st lap to gain control and appeared headed to a victory but as his line kept getting higher around the speedway, Watt was closing in after motoring into second.

Watt used the middle lane to run down Grosso by lap 37 and the pair battled for two laps before Watt was finally scored the leader.

Grosso drove into the outside first and second turn fence as he tried to preserve the lead on the 39th lap and that allowed Watt to drive by uncontested.

And then just after getting the lead, a fifth caution flag slowed the pace, giving Grosso new life.

But Grosso failed to mount a bid on the restart, instead again clouting the outside fence in the first and second turns before dropping to fourth thanks to the contact.

Duane Howard was third followed by Grosso and Craig VonDohren.

Heats for the 36 modifieds went to Howard, VonDohren, VanHorn and Jimmy Horton with Jeff Strunk scoring the last chance race.

Rahmer earned the pole for the 25-lap sprint car main with Lance Dewease starting in second and Rahmer got a good jump on Dewease as the start to get control.

Rahmer was running up on the backmarkers with Dewease in tow on the fifth lap when Dewease suddenly slowed and withdrew from the event, handing second spot over to Danny Dietrich.

In traffic, sixth starter Anthony Macri was closing on Dietrich and he was able to sneak by Deitrich for the spot on the ninth tour.

The only caution flag of the race unfurled on the 10th tour for a stopped Lucas Wolfe.

Macri kept Rahmer in his sights on the restart and when Rahmer again entered traffic with nine laps to go, Macri began gaining ground for the lead.

During the final five laps, Rahmer was forced to drop off of his top lane to get through traffic, allowing Macri to close even more along with a rebounding Dietrich.

Dietrich muscled by Macri to reclaim second with three laps to go and mount a bid for the win.

As the front pair crossed under the white flag for the final lap, Dietrich was nose to tail with Rahmer but as he set the car into the first corner, Dietrich nailed the outside wall, giving up his chance at the win.

And the contact then allowed Macri to close enough over the final half lap to steal the runner-up spot back into his clutches just before the finish.

Rahmer took the victory by 1.350 seconds over Macri with Dietrich finishing third followed by Logan Wagner and Dylan Cisney.