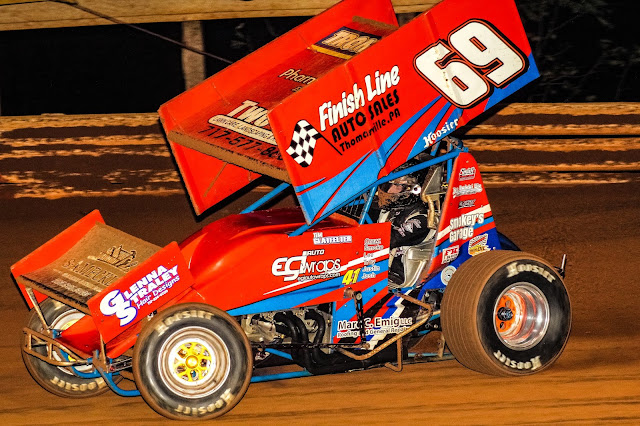 ABBOTTSTOWN, PA, 10/13/2018 – Lincoln Speedway closed out it’s 2018 season Saturday afternoon with a remarkable racing program which saw: Two drivers claim first-ever wins at the Pigeon Hills oval; A driver pick-up his second-career Lincoln win after a nine-year winless drought; and another driver crowned a champion. And all this under sunny, but chilly, Autumn skies for the running of the 30th Annual Hank Gentzler Memorial/Pancho’s Manufacturers Appreciation race.

Just another day of racing at the Fabulous Lincoln Speedway.

Spring Grove’s Tim Glatfelter was a rookie 410 sprint driver in 2009. As an up and coming micro-sprint racer, Glatfelter took the leap into the marque 410 division that year and accomplished a rare feat by picking up his first career 410 win on May 9th that same year.

But then weeks went by, that turned into years without another win. Glatfelter was close on several occasions, but fell just short of getting that second career win. Slowly the memory of that jubilant victory lane wing dance under the lights in 2009 was fading. Then in 2016 his business partner, crew chief, and father, Christopher Glatfelter passed away.

But Tim continued, as many racers do, week-in, and week-out, against all odds, to win. Then Saturday afternoon during Lincoln Speedway’s 2018 season finale, Glatfelter’s fading memory of 2009 was replaced with a new one.

“They say the first one (win) is the hardest, but damn it took us a long time to get number two,” said Glatfelter emphatically in victory lane.  following a rousing wing dance in celebration of his elusive second career win. “We do it for fun, yet take it very seriously each time out and we finally got one.”

“And of course my dad is not here for this one,” said Glatfelter with a quiver in his voice. “But he was with me the whole time today.”

A caution on the 12th lap bunched the field back together after the daytime racing surface had allowed Cisney and Forsythe to pull away in lapped traffic.

On the restart Forsythe pulled a dramatic slider on race-long leader Cisney exiting the fourth turn and emerged the leader as they completed the 12th lap.

Glatfelter knew it was now or never as they raced for the lead. That battle between Forsythe and Cisney for the lead opened the door momentarily for Glatfelter and he wasted no time to take advantage of it. The Spring Grove racer shot by both Cisney and Forsythe into the lead on the 13th lap.

“I felt like I was better than (Forsythe), but I just couldn’t get by him,” explained Glatfelter. “He would come down coming off the corner, which he had to do…but I felt if I could get by him I could run with Cisney because he was running the top.”

“We had a good drive off the bottom and when they got to racing each other it killed there momentum.”

Glatfelter had the lead. But the entire second half the race was ahead of him and five-time 2018 winner Danny Dietrich was closing fast.

Dietrich had passed Cisney for third on the 13th lap and quickly got by Forsythe for second a lap later. A caution for debris on the 16th lap put Dietrich on Glatfelter’s bumper.

Glatfelter stayed glued to the bottom on the restart and held Dietrich at bay. The final caution waved on the 19th lap. Glatfelter had Dietrich and Cisney lurking right behind him and only six laps stood between him and victory lane.

Glatfelter decided at that moment that if he was going to be passed those final laps, it would have to be on the high side. On the restart Glatfelter drove to the bottom and ran the inside line perfectly those final five laps.

“I knew Danny (Dietrich) was probably pretty good on the top and we weren’t good enough to run up there,” reflected Glatfelter. “I figured that if he was going to pass me from the top maybe I could get some speed built back up and drive back by him…but until he got by me I wasn’t going to change my line.”

Then after nine years, five months, and five days of trying, Glatfelter drove under the checkered flag for the second time in his 410 sprint career a winner. That fading memory of his first career win was replaced with a new one as he celebrated with another wing dance amid the cheers of an approving grandstand crowd.

“These guys that help me are as good, if not better, as any paid team out there,” said Glatfelter emphatically. “Every time we come here we never have a part fall off the car, we have no mechanical issues, yet only have one of everything you see on the car here.”

“They do a hell of a job,” he continued. “My engine has over 800 laps on it after today’s race and we usually have over 30 people in our pit every night, and probably pay half the purse”

Dietrich settled for a hard earned second-place finish after coming from his ninth starting on the tricky daytime racing surface. Cisney and Forsythe settled for third and fourth respectively. 11th-starting Lucas Wolfe quietly drove home with a fifth place finish when the dust had settled.

2018 Lawrence Chevrolet 410 Sprint Champion Brian Montieth was not at Lincoln for the finale due to the death of a close family member.

Heats for the 28 410 Sprinters were won by Glatfelter, Stutts, and Joe Kata, with Kyle Moody winning the consolation.

Heading into the season finale the 2018 Kreizer Aluminum Wheel 358 Sprint Champion had yet to be decided. The Make-up 358 Sprint Bob Leiby Memorial feature and a regularly scheduled 358 sprint finale would settle it all.

When the make-up Leiby Memorial feature took the green to start the afternoon’s racing program, all the drama for the 358 championship ended as Troy Wagaman, Jr. clinched the title by virtue of the points awarded for starting the feature. So the remaining 358 sprint program was for bragging rights and pride.

At 15 years old, Norris cannot legally drive to the races he competes in. Saturday afternoon on a tricky daytime racing surface everyone saw that the lack of a drivers license has no bearing on his performance on the racetrack.

In the make-up feature Norris drove from his fourth starting spot to pass race-leading Alyson Dietz on the 11th lap and pulled away the final nine laps to record his first career Lincoln Speedway 358 Sprint win.

Later in the afternoon in the regularly scheduled 20-lap 358 sprint feature that would officially close out the 2018 racing season Norris sat on the pole and had a shot at making history by recording not only his first, but his second career Lincoln win in the same day.

Unfortunately Norris yielded the lead to outside front row starter Chris Frank at the drop of the green and ran second the entire distance and watched Frank record his first career Lincoln Speedway 358 sprint victory. Just as he had done earlier in the day.

At 15 years old Norris had recorded a win, and second place finish. All in the same afternoon.

For Frank, he too recorded his first career Lincoln Speedway 358 sprint win, and a fourth-place finish.

Not a bad afternoon for the future stars of sprint car racing.

Norris and Frank were not the only 358 sprint drivers to get the fans attention.

The first 358 sprint feature saw Frank lead the first two laps before soon-to-be 20 year old (10/19) female racer Alyson Dietz took the lead and held on to the top spot until Norris took over on the 11th lap to eventually race to his inaugural Lincoln win. But Dietz raced strong the remainder of the way to record an impressive second place finish.

In the 358 sprint finale Dietz started third and again raced strong ending up with a fourth place finish behind fellow female racer Ashley Cappetta while Frank recorded his first win with Norris trailing him at the checkered.

Troy Wagaman, Jr., by virtue of just starting the first 358 Sprint feature, clinched his first-ever Lincoln Speedway track championship. He too had a strong run and finished third. Then Wagaman, with the track championship already in his pocket, decided to leave early and forgo the 358 sprint finale to compete elsewhere the same night.

In the second and final 358 sprint feature of 2018, Frank, Norris, Cappetta, and Dietz were followed by Cody Fletcher in fifth place. Rounding out the top-10 in the finale were Glenndon Forsythe, Brie Hershey, Matt Findley, Gregg Foster, and Zach Eucalano.

Heats for the 28 358 Sprinters were won by Rodney Westhafer, Nouse, and Brent Shearer.

This race closed out the 2018 racing season at Lincoln Speedway. The 2018 Lincoln Speedway Awards Banquet on Saturday, November 17th (6 PM-12:30 AM) will cap off the the season to honor the champions, top-10 in points, and give away the annual special awards in celebration of another successful season.

Promoters Don Leiby and Alan Kreitzer have announced that opening day for the 2019 season will be on Saturday, February 23rd. Gates will open at noon with 410 sprint car racing to begin at 2:00 p.m. So the countdown begins, 140 days, to the begin the 67th chapter of racing at the historic “Fabulous Lincoln Speedway”!