Automotive, Commercial and Industrial Lubricants Manufacturer to Serve as Primary Sponsor
For Logan Schuchart and Jacob Allen in World of Outlaws Competition 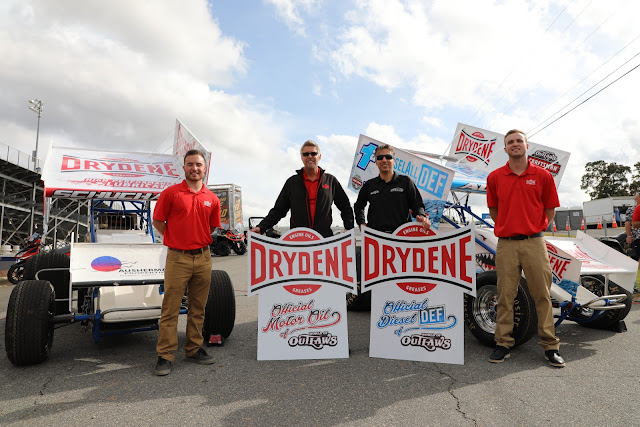 Drydene served as a co-primary sponsor with Schuchart on his Shark Racing No. 1s machine for a majority of the 2018 campaign and is expanding their relationship in 2019 and 2020 to both cars owned by Sprint car Hall of Famer and one of the original Outlaws Bobby Allen. Headquartered in Jonestown, Pennsylvania, Drydene Performance Products also announced today a multi-year partnership with the World of Outlaws to become the Official Motor Oil and the Official Diesel Exhaust Fluid (DEF) of the World of Outlaws Sprint Car and Late Model Series beginning in 2019.

“Drydene is all in, and these partnerships underscore our commitment to Shark Racing, the World of Outlaws' series, and race fans throughout the United States,” said Dave Klinger, President of Drydene Performance Products. “Successful partnerships are mutually beneficial, and we recognize the growth Shark Racing has demonstrated during their first five years competing in the World of Outlaws. Drydene got a firsthand look this year while teaming up with Logan (Schuchart) for most of the 2018 season. He’s a rising star in this sport and we’re excited to align with him as he chases his dream of becoming a World of Outlaws champion. In addition, seeing talent develop is very important to us and we are thrilled to be able to expand our partnership with Shark Racing and add Jacob Allen to Team Drydene. Two drivers and two cars, both carrying the Drydene brand while chasing wins in “The Greatest Show on Dirt”, and all in front of the most passionate fans across the country… what a great way to build the Drydene brand.”

Schuchart is excited to continue carrying the Drydene brand into the future after a solid beginning to the partnership this season that included the Hanover, Pennsylvania native earning Drydene its first World of Outlaws triumph in August winning the Ironman 55. Wins during the prestigious Knoxville Nationals and later in the season in Fulton, New York also highlighted a campaign that continued his ascent in Sprint car racing’s premiere series. Entering the final weekend of competition, he is tied for seventh in overall wins, ranks fifth in top-five finishes, leads all drivers with seven fast qualifier awards and holds down the sixth position in the championship standings. Accomplishments he hopes to surpass next season driving the Drydene No. 1s.

“The Drydene relationship has been incredible and we’re just getting started,” said Schuchart, grandson of Bobby Allen. “Our goal is to become a World of Outlaws champion. Trying to do that with a company led by people like Dave Klinger that has passion for being the best is something I just can’t describe. I was ready to run through a brick wall the first time I heard Dave speak. Partnering with Drydene and racing with the World of Outlaws for years to come has all of us really excited. The future is really bright and we’re ready to get the job done.”

In the midst of completing a career-best season, Shark Racing’s Jacob Allen becomes the newest member of Team Drydene. The 24-year-old turned the corner this season and became a consistent threat starting in June. A 28-race stretch during the middle of the season elevated his status on the tour thanks to Allen leading laps in five races, finishing second four times and qualifying for both the Kings Royal and Knoxville (Iowa) Nationals A-Main fields. The experience gained along with the opportunity to represent Drydene in more than 90 nights of racing next season and beyond has Allen poised to make another big jump in the series standings.

“Following in my dad’s footsteps and racing with the Outlaws has been something I hoped I could do, but this year I really felt like I belonged and had a legitimate shot at competing for wins,” said Allen. “Now to join Team Drydene and carry their brand and products on the Shark Racing 1a next year is such a big deal for me. The game just got better for sure.”

For Shark Racing, the partnership with Drydene solidifies the team’s ability to continue its climb in the World of Outlaws hierarchy. From their initial season in 2014 through 2018, the growth curve has been steadily climbing to the point where Shark Racing cars were in contention for wins on a regular basis this season and with the partnership with Drydene Performance Products, owner Bobby Allen is poised to push his two drivers and the team to new heights.

“I only know one way to race and that’s to try to do everything I can to beat the competition,” admitted Allen, a former World Karting Champion and winner of the 1990 Knoxville Nationals. “Being around people like Dave Klinger at Drydene has me so pumped up to get to the track. Drydene's entire organization has a passion to win and be the best, and that’s the kind of energy we want to be surrounded by. We are looking forward to having a lot of success in the future.”

ABOUT DRYDENE PERFORMANCE PRODUCTS
For over a century Drydene lubricants have been made in America and made to last… paving the way on our highways, in our fields and on the production line. In the dawn of American industry, Drydene was there as we built our first roads, laid the blocks for our first factories, spanned rivers with new bridges and rail. And we’re still right here today doing what we do best; helping America Get the Job Done. Drydene products are built with ALL Technology®, Advanced Lubricity Life chemistry, to meet and exceed today’s modern automotive, heavy duty and industrial needs.

ABOUT LOGAN SCHUCHART
Logan Schuchart, pronounced (SHOE - HART), is completing his fifth season of competition with the World of Outlaws (WoO) Craftsman Sprint Car Series driving for Shark Racing. He competed in go-karts and won a number of track championships before moving to 358 Sprint cars in 2009. He won track and series championships in 358s before moving to the 410 division late in 2011. In 2012 and 2013, he collected wins with the All-Star Circuit of Champions and at legendary Central Pennsylvania tracks like Williams Grove, Lincoln, and Port Royal. In 2014, he began his career with the World of Outlaws and two years later scored his first career triumph in July 2016. He has eight career wins with the Outlaws and also scored two wins in Australia this past winter.  More details are available at: www.loganschuchart.com and on social media platforms: Facebook -  www.Facebook.com/LoganSchuchart1s, Twitter: @LSchuchart1s, and Instagram @loganschuchart.

ABOUT JACOB ALLEN
Jacob Allen is in his fifth season of competition with the World of Outlaws (WoO) Craftsman Sprint Car Series driving for Shark Racing. He competed in go-karts before moving to 358 Sprint cars in 2012. He won races at Lincoln Speedway, Trail-way Speedway and Susquehanna Speedway in 358s before moving to the 410 division in 2013. He earned his first 410 win at Susquehanna Speedway after completing his third season competing with the World of Outlaws. Follow him on his social media platforms: Facebook: www.Facebook.com/JacobAllen, on twitter: @JacobAllen1a, and Instagram: @jacoballen1a.

ABOUT SHARK RACING
Shark Racing is a dream realized of National Sprint Car Hall of Fame member Bobby Allen. The former world champion go-kart racer grew up in Miami, Florida and migrated to Central Pennsylvania in 1967 to race Sprint cars. After concluding his career as driver, which included hundreds of victories most notably the 1990 Knoxville (Iowa) Nationals, “Scruffy” began mentoring his grandson, Logan Schuchart, and son, Jacob Allen, from go-karts into 358-Winged Sprint car and ultimately into the 410-Winged Sprint car class. In 2014, he took both drivers out on the road to compete with the World of Outlaws. The team in the midst of their fifth season of competition with the Outlaws and have scored six wins to date. Shark Racing is based out of Hanover, Pennsylvania. For more information, visit https://shark1s.com/.
Posted by Bill McIntyre at Sunday, November 04, 2018