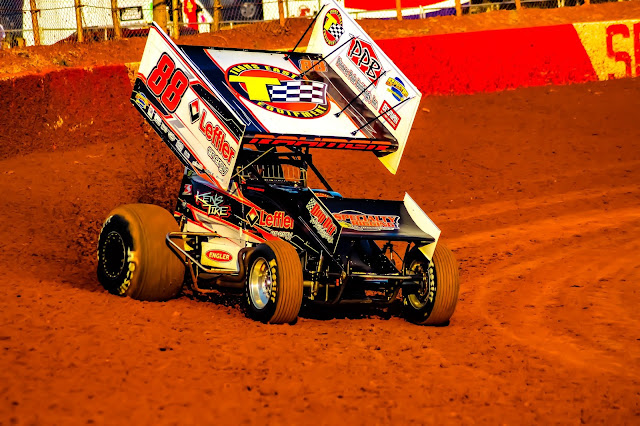 FOR IMMEDIATE RELEASE Thursday, February 21, 2019
A new era begins at Lincoln Speedway this coming Saturday afternoon.
As will a new relationship between two iconic members of the Adams County community.
“I am thrilled to announce a new partnership with Gene Latta Ford for the 2019 season,” said Jerry Parrish, the new  managing partner of Sel-Wil, Incorporated, the promotional team that now owns Lincoln Speedway, “Gene Latta Ford has  come aboard as the title sponsor for the 410 sprint car point series for the coming season.”

Gene Latta Ford has been serving the Hanover and surrounding areas since 1973 with the business philosophy of  “Customers Come First” in the automotive industry. From its humble beginning, Gene Latta has now grown into the number  one volume Ford dealer in Adams and York Counties in Pennsylvania and Carroll County, Maryland.

“We are proud to sponsor the 410 sprint division at Lincoln Speedway for the 2019 season, as we feel it’s a great fit  for exposure right in our back yard,” said Shawn Groft, general manager of Gene Latta Ford, “These guys have been putting  on a great show at Lincoln Speedway for years and years, and we are just glad to be part of it in 2019.

“Lincoln Speedway is a big part of our community, as is Gene Latta Ford,” added Groft, “so it’s a perfect match in my  mind.”

It’s also a perfect match in the minds of the new Lincoln management team, which includes Parrish, Scott Gobrecht,  Mike Heffner, and Alan Kreitzer.  “We can’t think of a single business that has influenced the community in as positive of a manner as the Lattas,” said  Parrish, “We hope the new relationship will last for many, many years.”

Celebrating its 67th year, Lincoln Speedway continues a tradition of offering the world’s toughest, most competitive  weekly sprint car racing. Super sprints have comprised the main class of racing at Lincoln since 1965, and the “410” sprints  are featured in 29 of Lincoln's 31 race dates this year, with a dozen other racing divisions competing at the Pigeon Hills oval  during the upcoming season.

Both this Saturday’s “Icebreaker 30” and next Saturday’s show (March 2nd) carry rain/snow dates of the next day.
Posted by Bill McIntyre at Friday, February 22, 2019