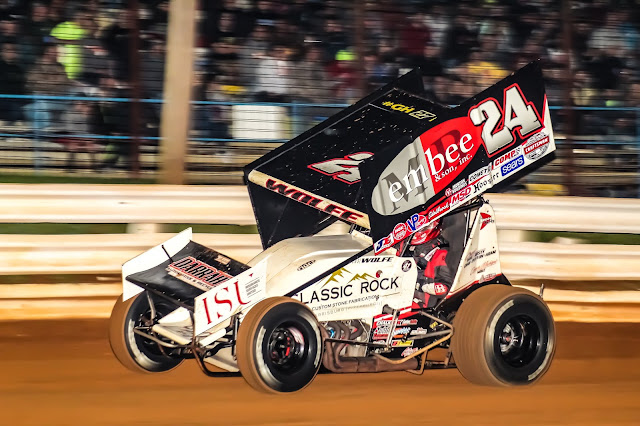 Williams Grove Speedway will open the 2019 season coming up on Sunday afternoon, March 17 at 2 pm as the track begins to celebrate its 80th anniversary season of auto racing with a program of Lawrence Chevrolet 410 sprint cars.

Last year, on March 11, Mechanicsburg’s Lucas Wolfe opened the season by scoring the lidlifter before going on to claim two more victories at the oval while on his way to claiming the 2018 track title.

And Wolfe will be back for more in 2019 aboard Michael Barshinger’s No. 24, making an effort to back up his track crown.

The 32-year old reigning champion will meet fans and sign autographs on opening day from the time that gates open at noon until 12:45 pm.

And from there Wolfe will embark on his third season behind the wheel for Barshinger at Williams Grove Speedway and he’s fairly optimistic about the races to come this season.

“I think we're in pretty good shape,” Wolfe said of his program recently as he pondered the year that lies ahead.

“Over time there should be a continual improvement as familiarity grows, it should all be moving forward.  We were satisfied with our baseline at the finish of last year so we haven’t really done a whole lot to alter that and hopefully that will allow us to be more streamlined from last year into this year.”

Wolfe got his feet wet for the year by competing recently in Florida and will race regularly at Williams Grove this season, using lessons that he and his team learned last year in order to make this year another success.

“I think we’re looking to implement some of those ideas over time as the season progresses,” he noted.

“We just go to every race and we intend on competing in every race. Ultimately winning races at a consistent level is the goal but there’s not a benchmark to win per say. Ultimately its finding the right speed and right balance in everything you run.”

Just like last season, Wolfe will also pilot a mount owned by Jim and Laura Allebach at select events during the year ahead including in 360 sprint competition at Williams Grove.

Courtesy of Williams Grove Speedway and Hoosier Tires, Hoosier giveaways are slated for the season lidlifter for both fans and racers alike.

Adult general admission is set at $15 with youth ages 13-20 admitted for just $10.  Youth ages 12 and under are always admitted for FREE at Williams Grove Speedway.

Keep up to date on all the latest speedway news and information by visiting the oval’s official website located at www.williamsgrove.com or by following the track on Twitter and Facebook.
Posted by Bill McIntyre at Monday, February 25, 2019