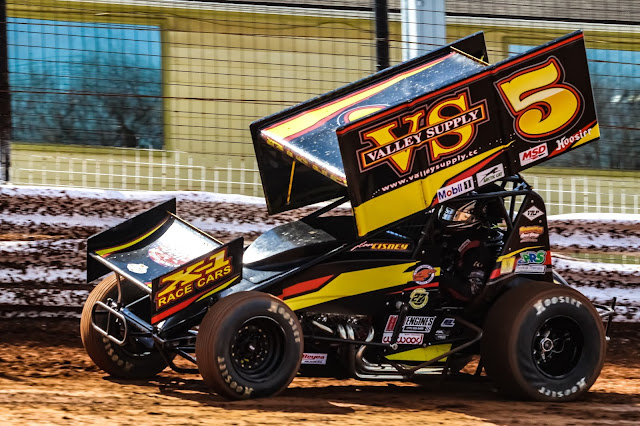 “I lost so many races the last couple years here on a last lap pass it’s good to be on the other side for once,” Cisney said.

The track was just the way he likes it.

“It’s fun,” he said. “That was 25 laps of riding the racecar around the track and having a good time. You get to be a factor in it a little bit more. It’s not so much your car. You have to drive it, work
the pedal, work the wheel, the wing, it’s a blast. When I show up here and the track looks like this that’s what I’m looking for.”

He had to be cautious, but still aggressive, on the slick racing surface.

“You’ve got to be a little bit easy especially with the day time track,” Cisney said. “You can’t be pitching the car around. Got a little bit of a divot going into one here, so it’s real touchy how you
drive it. The wind, the slick track, you’ve got to be on your toes getting the car to where you want to be.”

Cisney already had two races under his belt coming into Port’s opener.

“Our goal is to race around a little bit more this year,” he said. “We’ve got to get better. We don’t do enough racing and our goal is going to be to get to more tracks and get more laps under our belt.
That’s the only bad thing about being a one night a week team. We’re going to try and change that this year.”

“To have two races under my belt already coming into Opening Day makes a world of difference. I was ready to get after it. The track was perfect. It was a blast in the car. Two and three-wide, side-by-side. There was a cushion up top and you could run around the bottom. I’m glad we could take home the win. We’re just a couple construction workers and an RV mechanic here with a racecar and we found victory lane.”

Macri has been a factor in almost every race so far this season, but hasn’t been to victory lane yet.

“Losing one on the last lap stings, but losing a second is killing me right now,” Macri said. “The next day it feels awesome that we’re running up front consistently, but it sure as hell doesn’t feel good
right now.”

Carl Bowser started on the pole of the first 25-lap Weikert’s Livestock Sprint car feature of the 2019 season at the Speed Palace, but after a close call on the frontstretch, it was Macri securing the
lead off turn two. Cisney started eighth, but was fifth after one lap.

Macri’s lead was 2.6 seconds as Brock Zearfoss and Bowser raced hard for second. Zearfoss slipped a little high off turn two allowing Cisney to drive by on lap eight.

Cisney got by Bowser for second on the frontstretch, but Bowser returned the pass in turn two. Cisney finally made the pass stick a few laps later.

The lead was 1.5 seconds with five laps to go.

Macri caught slower cars on the final lap.  He went low into turn three and Cisney went to the outside. Cisney drove off turn four as the new leader and took the checkers by .322 over Macri. Zearfoss, Steve Buckwalter and Cale Conley completed the top five. Lucas Wolfe,
21st starter Logan Wagner, Carl Bowser, Mike Wagner and TJ Stutts rounded out the top 10.

In the 30-lap River Valley Builders ULMS feature, Dylan Yoder started on the pole driving into the lead. Max Blair raced into second with a pass of Gene Knaub.

The first yellow flew with 23 laps to go.

Yoder controlled the restart as Jason Covert passed Rick Eckert and then Knaub taking over third. Covert went after Blair taking second on lap 12. The yellow flag flew, however, negating that pass.

A wild restart saw Covert, Eckert and Knaub all pass Blair as Yoder maintained control. He led by 1.884 at the half-way point.

Yoder was working through lapped traffic without much trouble over the final 10 laps. Eckert challenged Covert for the runner-up spot as Yoder led by 1.383 with five laps to go.

Yoder was on the bottom, but blocked by slower traffic. Covert went to the middle groove and made it work taking the lead off turn two with less than two laps left.

In qualifying, Eckert was fastest in Group A with a lap of 20.469 and Hubbard fastest in Group B with a 20.794. Heat races for the 36 cars were won by Eckert, Michael Norris, Hubbard, and Knaub. Mike Lupfer and Alex Ferree won the B-mains.

In the Mason Dixon feature, Selinsgrove’s Andrew Yoder started on the pole and drove into the lead. As he controlled the pace, Devin Frey and Devin Hart raced side-by-side for second.

Yoder’s big lead was erased with nine laps to go when a car broke right in front of him in turn three. He was able to miss the slowing car as the yellow flag flew.

Yoder pulled away as Hart secured second following the restart.