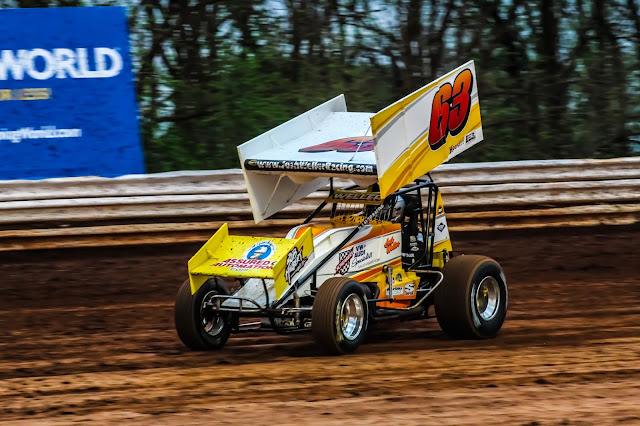 MARCH 21, 2019 – With the 72nd United Racing Club season opener less than four weeks away, time is dwindling down as drivers hustle to get their cars ready for the 2019 season.

And one driver in particular is looking to carry the momentum from his championship-winning 2018 campaign into the new season.

Josh Weller said that despite a season full of rainouts, 2018 “was a great season for us.”

Only running 11 races thanks to Mother Nature, Weller was able to capture three wins and showcased impressive speed throughout the entire season, culminating in his first series championship.

Weller has been working to put a team together for three years, including both people and equipment and he said 2018 was the year where all the pieces of the puzzle were fit in the right order to make it all work.

“We had been close the last six years, but never had everything fall the right way to make it happen. It is a huge accomplishment for all of us to have won the championship. I am proud of the work everyone involved put in to make me look good. I am very happy to finally get my name on the perpetual trophy.”

And there’s no doubt that earning his name a place on the URC champions' trophy gives him a bit more confidence heading into 2019 – but that boost of confidence also comes with added pressure.

“I also feel a bit more pressure to perform,” the reigning champ said. “Before there wasn’t an expectation outside of the pressure I put on myself. I feel now we have more pressure to be fast every time we unload and a target on our backs to keep us from a repeat.”

But Weller and his team are up to the challenge and have their sights set on more checkered flags and back-to-back championships. “For 2019 I am looking forward to getting out and hopefully winning some more races,” said Weller. “I hope to be able to defend the championship.”

Weller will run the full URC schedule, possibly adding a few extra shows to the schedule toward the end of the season depending how the year shakes out.

“I am excited to get back to Grandview. It is a track that we have had success at and is close to home. There are some tracks that I am hoping we can improve at and get our Central PA runs stronger.”

Weller said he enjoys racing with the Capitol Renegade United Racing Club because it allows him the opportunity to travel to various tracks.

“I do not like to race at the same track all the time. I get bored. I enjoy traveling and seeing different fans. I also am proud to be a part of the longest-running racing club in the United States.”

Weller’s No. 63 sprint car will hit the track at Bridgeport Speedway for the season opener Sunday, April 14. Racing begins at 5 p.m.

Note from Josh Weller: “I would like to thank my wife Jess, my parents, Cory, Kurt and Kirlin for their help throughout the year. And my sponsors Schearer's Sales and Service, Assured Automation, McBrother's Overhead Doors, Victory Auto Glass. And our product sponsors, Simpson, UltraShield, Wilwood, FK Rodends, VP Race Fuels, Bob Hilbert Sportswear and Seals it.”

The United Racing Club is a traveling 360 sprint car organization that was founded in 1947. Following the value “It’s your club, it’s racing the way you want it,” URC is governed by its own membership and runs at local dirt tracks across the northeast. For more information, please visit www.urcsprintcarseries.com or find us on Facebook, Twitter and Instagram.
Posted by Bill McIntyre at Friday, March 22, 2019