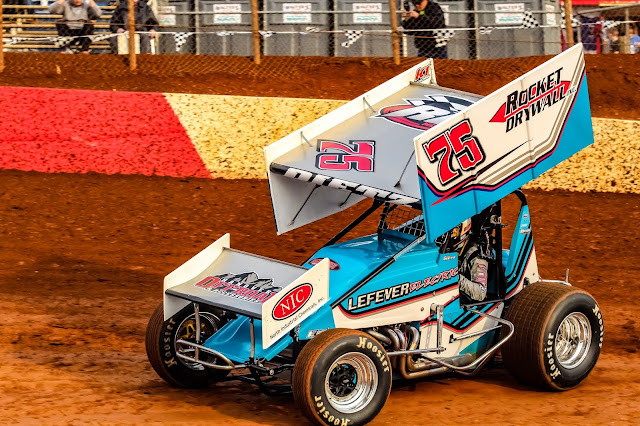 Howard got out to the early lead with Dietz up to second on lap 1.

Freddie Rahmer started to work his way to the front of the field from his ninth starting spot. Rahmer was up to seventh by lap 2 and was running fifth on lap 3 when he went to work on Glenndon Forsythe for fourth. Rahmer got by Forsythe going down the backstretch on lap 5.

Forsythe then found himself caught between the Rahmer brothers with Freddie in fourth and Brandon right behind him running sixth.

While Forsythe was battling the Rahmers, Dietz was tracking down Howard for the lead. Dietz tried to get under Howard on lap 7 in turns 1 and 2 but couldn’t make the pass for the lead until turns 3 and 4.

Freddie passed Hivner for third and Howard for second on lap 10. As Dietz worked his way through lapped traffic Rahmer was chasing him down.

The caution flag came out on lap 14 for debris on the backstretch.

Dietz led Freddie, Howard, Brandon and Adam Wilt to the cone for the single file restart.

Freddie went to the bottom of the track on the start to try and take the lead. He tried again with a slide job on Dietz in turns 3 and 4 but Dietz held onto the lead, beating Freddie to the line by inches. While Freddie was battling for the lead, Brandon got around Howard for third.

The caution came out again on lap 17 for George Suprick who got turned around in turn 3.

Dietz once again led the field to the cone with Freddie in second. Rahmer got up on Dietz’s right rear going into turn 1 on the restart. Although he was able to save the car from flipping, he still ended up turned around, bringing out the caution.

This time Dietz had Brandon Rahmer behind him for the restart followed by Howard, Wilt and Anthony Macri.

Dietz and Rahmer both chose the bottom going into turn 1 on the restart. Wilt pulled a slide job on Rahmer in turns 3 and 4 for second. Brian Montieth was up to fourth on lap 18 from his fourteenth starting spot.

Montieth tried a slide job on Brandon for third on lap 21 but couldn’t make it stick. Dietz caught the tail end of the field with 1 lap to go but had created enough distance that lapped traffic wasn’t a factor.

Current 410 series point leader Kyle Moody came to a stop during his heat race forcing him to run the consy. Moody flipped in turn 2 during the consy, ending his night.

Cole Young was back at Lincoln two weeks after taking a spill down the front stretch. After issues with the car during his heat, Cole’s father, Niki Young got behind the wheel for the consy to try and help figure out what was wrong with the car. Niki started 21st in the feature and finished sixteenth. 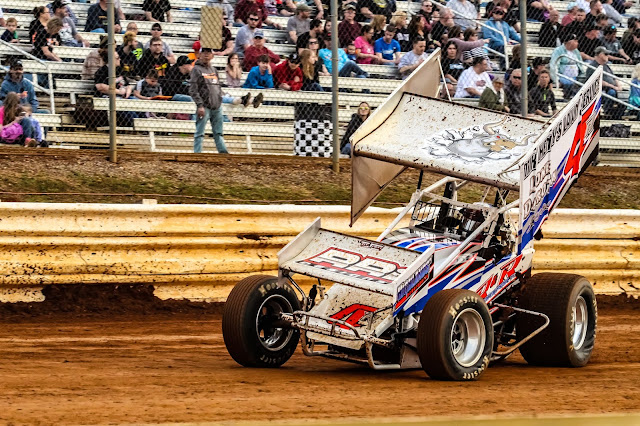 Doug Hammaker won his second feature of 2019 and his seventh at the Speedway on Saturday night.

Zachary Allman started on the pole of the 20-lap feature with Kenny Kuhn to his outside. Mark Van Vorst and Brett Strickler made up row two.

Kuhn took the lead at the start with Allman and Strickler falling in line behind him. Hammaker was on the move early and was up to fourth on lap 1 from his eighth starting spot.

Hammaker made quick work of Strickler and Allman and was up to second on lap 2. Jeff Halligan was right behind him and was up to third from his tenth starting spot.

As Kuhn approached lapped traffic, he had a nearly 2 second lead. Hammaker reeled Kuhn in as he was trying to get around the first lapped car. It didn’t take long for Halligan to join in and make it a three-way battle for the lead.

Hammaker tried the top of turns 3 and 4 and took the lead coming out of turn 4 with two laps to go. Halligan got around Kuhn for second on the following lap.

Wesley Bonebrake shared the front row with pole-sitter Joe Westerman. Bonebrake and Westerman raced side-by-side for the first lap with Bonebrake beating Westerman to the line by a nose.

Craig Wagaman was up to third on lap 3 and started to go to work on Westerman for second. Wagaman got him at the flag stand on the next lap to take second, but Westerman didn’t go away quietly. Contact was made coming out of turn 4 on the next lap as Westerman tried to bump Wagaman out of the way. Wagaman didn’t let that phase him and he held onto the position.

Troy Miller then went to work on Westerman for third. Westerman was able to create some distance between Miller.

Bonebrake started to work through lapped traffic on lap 8 and didn’t let it slow him down.

The caution flag came out on lap 15 for Bernie Beard after he got turned around coming out of turn 4.

Bonebrake led the field to the cone for the restart. Wagaman tried the outside but got too high and couldn’t make the pass for the lead. Shaun Miller got around Troy for fourth.

Wagaman was getting his nose next to Bonebrake going into turn 1 but couldn’t get the car to stick through the turns to make the pass.

Next Saturday, May 4, Lincoln Speedway is back in action with 410 Sprints, 358 Sprints and Extreme Stocks. It is also York Flooring Kids Big Wheel Races and York County Racing Club Night. Racing starts at 7:30PM with pit gates opening at 5:00PM and grandstand gates opening at 5:30PM.