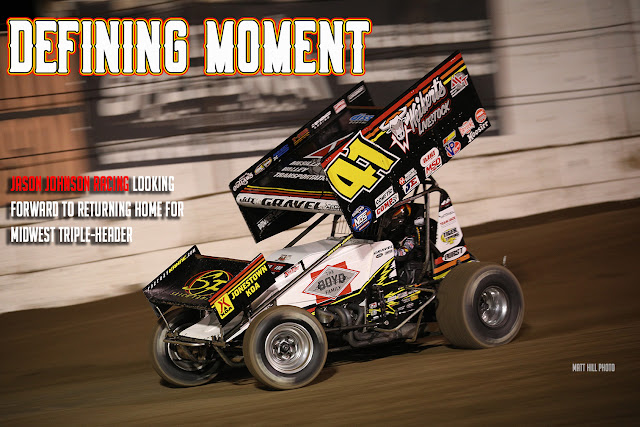 ELDON, Mo. — There wasn’t a big enough word in the dictionary to describe how Jason Johnson Racing team owner Bobbi Johnson felt when David Gravel and the team claimed their first win of the season in March at Keller Auto Speedway in Hanford, Calif.

It was the team’s first World of Outlaws win since her husband and team co-owner Jason Johnson died in a racing accident last year.

“There were tears of joy. Tears of sadness. Tears of everything, really, all mixed into one ball,” Johnson said. “I got on the dictionary and tried to find the biggest word to describe your feeling. It’s just unreal.”

The team’s feeling of joy continued two races later when Gravel won again at Arizona Speedway, and it could return this weekend. The Missouri-based team will be racing close to home at Lake Ozark Speedway on Friday, Federated Auto Parts Raceway on Saturday and Jacksonville Speedway on Sunday.

Of the three Midwest tracks, Lake Ozark Speedway in Eldon, Mo., is the one Johnson has circled on the schedule with it being just eight miles from the team’s shop in Rocky Mount, Mo. A win at the speedway would be “wild and unique,” she said.

Racing close to JJR’s home, with local sponsor and fan support, doesn’t come with any added pressure to win for Gravel. Instead, he said it’s more relaxing.

“I think it makes it more enjoyable for the guys,” Gravel said. “You can drive 15 minutes and be at the shop, it’s definitely a good thing.”

Locating Jason Johnson Racing in Missouri was by design. Johnson said with the more than 90 race World of Outlaws schedule that spans the United States, there are times when teams are home only once or twice throughout the season. Being centrally located in the Midwest, Johnson said the team gets to come home about six times a year.

“It’s probably one of the best, super exciting feelings you can have on the whole tour, that you get to sleep in your own bed,” Johnson said. “We felt we picked a great location to have a race team based out of just because you get to come home, per se, and have a couple extra fun things to do.”

With the Series being off for a week, teams had an extra week of being home. Work didn’t stop though. Their focus is still on winning the next race, and even though Gravel already has two wins — one of three drivers, so far, this season with more than one win — that hasn’t changed his or JJR’s approach to the season.

“We come to win every night,” Gravel said. “Realistically that’s not possible, but you like to run the best and make the best of every night no matter where you start. I think as a team we want to consistently be in the top five.”

This season is Gravel’s first year with Jason Johnson Racing, after three years with CJB Motorsports, and Johnson couldn’t be happier with the progress of the team, so far.

“Jason (Johnson) used to say it’s so hard to win an Outlaw race,” Bobbi Johnson said. “You’re racing against the best. It’s the most elite. So, to pull off not only one victory, but two victories, in my eyes, it’s totally awesome. We had some highs and lows already this season, and then accomplished the almighty — win a race with the World of Outlaws together as a new team.”

When looking for a driver to fill Johnson’s seat in the No. 41 Sprint Car, there were a few drivers being looked at, but Bobbi Johnson said, her heart leaned toward Watertown, Conn. driver, David Gravel.

During their long hours together on the road, Johnson said she and Jason would talk about different drivers they felt were up and coming and would rise to the top of the World of Outlaws. Gravel was one of them.

“We talked a lot about his driving capabilities,” Johnson said. “When it came available that he was available, we reached out and had a meeting.”

To her, Gravel was the right fit.

“I’m very happy with the progress that we’ve made,” Gravel said, who currently sits sixth in points, 92 points behind leader Brad Sweet. “And hopefully we just keep that going.”

Same as Gravel, Johnson’s ultimate goal is to win more races. This weekend’s Midwest triple-header will be the next target. But she’s still living in the moment of seeing the No. 41 Jason Johnson Racing Sprint Car return to victory lane, not once, but twice already this season, trying to define her feelings.

“We beat some of the best out there,” she said. “I guess you can’t really describe that feeling because it’s just unreal. I guess I’m more proud that the team pulled together.”

• MULTIPLE WINS: When Logan Schuchart won Friday night at Devil’s Bowl Speedway, he became just the third driver with more than one victory this season, joining Daryn Pittman – who won the first two Features of the year – and David Gravel – who won at Keller Auto Speedway and Arizona Speedway.

• BUILDING CONSISTENCY: After scoring their first top-10 of the season at Arizona Speedway, Jacob Allen and Kraig Kinser backed up their performance with strong runs at Devil’s Bowl. Kinser scored the Quick Time of the night and finished second in his Heat race to winner Allen. Kinser then went on to win the DIRTVision Fast Pass Dash and start on the pole for the Feature. He led the first three laps before Allen took the lead. Both eventually faded out of the top two spots, but remained in the top-five with Allen finishing third and Kinser fourth.

WHEN & WHERE
Friday, April 26, at Lake Ozark Speedway in Eldon, Mo. for the Battle at the Lake
-Grandstand gates are scheduled to open at 4 p.m. with Time Trials at 6 p.m. and Racing at 7:30 p.m.

Saturday, April 27, at Federated Auto Parts Raceway at I-55 in Pevely, Mo. for the Spring Classic
-Grandstand gates are scheduled to open at 4 p.m. with Time Trials at 6 p.m. and Racing at 7:30 p.m.

TICKETS
Tickets can be purchased by going to WorldofOutlaws.com/tix or by calling 844-DIRT-TIX.

1/3-mile and 1/4-mile winners
There have been two races on a 1/3-mile track, so far, this year. Ian Madsen won at Thunderbowl Raceway on March 9 and David Gravel won at Arizona Speedway on April 6.

There has been one race on a 1/4-mile track so far this year. Carson Macedo won at Silver Dollar Speedway on March 15.

AROUND THE TURN: The World of Outlaws NOS Energy Drink Sprint Car Series will next race on Friday, May 3, at Riverside International Speedway in West Memphis, Ark. and on Saturday, May 4, at Tri-State Speedway in Haubstadt, Ind.