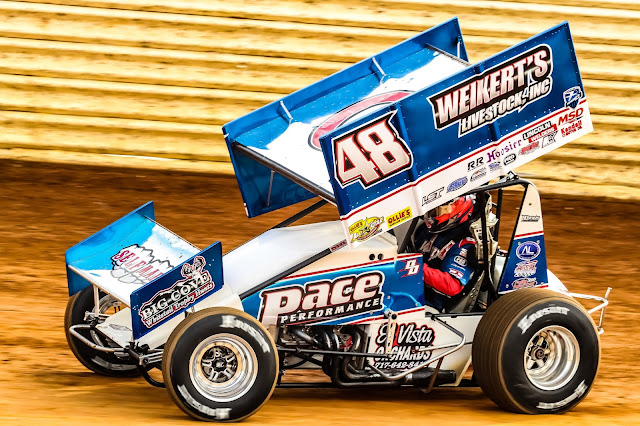 PORT RYOAL, Pa- What a difference a one week makes? One week after Lance Dewease used a late restart to pass Danny Dietrich for the win during the Ollie's Bargain Outlets All Star Circuit of Champions visit to Port Royal Speedway, Dietrich held off multiple late restarts and fought off a nearly 2-hour rain delay earlier in the night to bring home his first Weikert's Livestock 410 Sprint Car Series victory of the season at 'The Speed Palace'.

"Man, I really wanted this one tonight. I wasn't going to let it get away this time on restarts," said Dieterich, from Gettysburg. "I had to hold them off twice. 3 to go I had to hold off (George) Hobaugh and 1 to go I knew Brock (Zearfoss) was going to throw me a slider there. Just really happy to be standing in victory lane tonight."

Hobaugh and Cory Haas led the field to the green, with Hobaugh jumping out to the early lead. Meanwhile, Dietrich was already in fourth place at the completion of the first lap using the high line from his 8th starting spot.

Zearfoss also began his trek to the front, moving into the 9th spot early and into the 8th spot by lap 4.

By lap 5, Hobaugh hit lap traffic and began to maneuver through the back end of the field with a lengthy lead over Haas and fourth starting Jared Esh. One lap later, Esh pulled into the infield with an issue handing 3rd place to Dietrich.

As Haas, Dietrich and rookie of the year contender Tyler Reeser attempted to track down Hobaugh, Zearfoss was continuing to move forward. He moved into 6th on lap 8 and then 5th on lap 9, using multiple lanes of the track to pass.

On lap 14, Dietrich and Reeser both pulled under Haas on the backstretch moving into 2nd and 3rd and they raced nose to tail towards Hobaugh. Two laps later, Zearfoss slid under Haas to move into 4th place as well.

Dietrich attempted a pull a slide job on the next circuit, only for Hobaugh to power off the top and regain the lead. However, the second time was the charm as Dietrich once again slid Hobaugh on lap 19 in turns 1 and 2, this time making it stick.

"Hats off to Hobaugh and his team for running such a good race and leading a bunch of laps," said Dietrich. "However I know this place a little better than him and I knew if I got there, I could use that to my advantage."

Two laps later, Reeser's night ended when he made contact with the outside wall in turn 2 and slowed to a stop with mechanical issues in turn 3, bringing out the first caution of the night.

Dietrich sped off once green flag racing returned with Zearfoss sliding under Hobaugh for 2nd with only 3 to go. However, it looked to be too little, too late for the Jonestown native to make a run at Dietrich.

But Mike Wagner blew a tire on the white flag lap and came to a stop on the front stretch just before the flag stand setting up a one-lap shootout for the victory.

When the green flag dropped, Zearfoss slid under Dietrich and attempted to make it stick coming out of turn 2, however Dietrich powered back under him going down the backstretch and ran through the middle of turns 3 and 4 to claim his 6th career Port Royal Speedway victoryand the $3600 payday by a margin of .364 seconds over Zearfoss, Steve Buckwalter, Hobaugh and Haas.

"Brock and his guys have been so fast all season and I knew he was going to try and slide me there," said Dietrich. "I just had to make it stick and hold my line and if we could do that I knew we'd get back by him."

Zearfoss knew he only had once chance and he'd have to be perfect to claim the victory, but ultimately was pleased with a podium finish.

"Man that car was fast tonight and my guys gave me a great car," said Zearfoss, who will be a regular with the All Star Tour in 2019. "I gave it everything I had, but ultimately we just needed a few more laps. We'll take a second and some momentum and apply it to the rest of our season."

Brenneman  and Kyle Knapp lead the field to the green flag with Brenneman jumping out to the early lead. However, it was short lasting as Flinner drove alongside of him on the outside of the track taking the lead for good on the next circuit coming out of turn 2.

Flinner sped off to a large lead and approached lap traffic on lap 11, allowing the competitors to mount a challenge.

Two laps later, Yoder would make slight contact with a lap car on the front stretch, allowing Flinner to once again move out to a sizeable lead. Over the remaining 8 laps Yoder would again start to track down Flinner and he attempted a last ditch slide job in turns 3 and 4 coming to the checkered flag.

However it wasn't enough as he couldn’t gain enough momentum to pass him and Flinner would go out to claim the $2000 winner's share over Yoder, Hardy, Jeff Rine and Michael Maresca.

" We were trying a new car the last few times we were here. This is the car we had in Florida and it’s really good. I hope nothing ever happens to it," said Flinner. "I didn’t know Yoder was coming, but he;s so good at this place on the top. So I'm just glad to hold him off".

Following a week of disappointment after finding out he'd been disqualified after a tech violation found during Mason Dixon Limited Late Model action at the Port Royal Speedway last Saturday, Devin Hart only knew one way to move forward….win.

With a chip on his shoulder and a point to make, Hart passed Troy Miller in lap traffic on lap 11 and went unchallenged in nonstop feature action to claim his second Selinsgrove Ford Limited Late Model feature win of the season.

Hart, who started 5th, quickly made his way through the field and moved into 2nd by lap 5.

By lap 9, the top 3 cars of Miller, Hart and Ryan Zook were all nose to tail as Miller entered lap traffic. Over the next few laps, Hart attempted to pass Miller before finally pulling off the pass in turns 1 and 2 on lap 11.

Andrew Yoder, who started 8th, mounted a late challenge as Hart attempted to maneuver lap traffic on the final lap. However, he was never able to really pull close enough to make a move and Hart went on to best Yoder, Miller, Zook and Dillan Stake by a .661 second for the $800 victory.

"We came back with a point to prove. What happened last week shouldn’t have happened and this just proves it," said Hart. "There was no issues with our car tonight and it’s going to stay this way. It was a long week and it’s nice to finish it off with a win and some redemption."