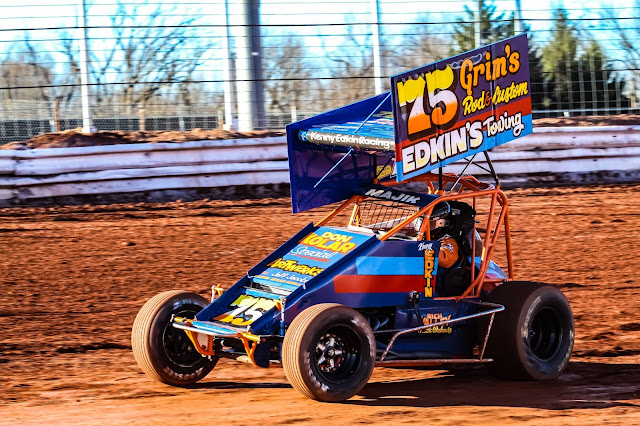 YORK HAVEN, Pa.: Kenny Edkin had a huge smile on his face when he climbed out of his car Saturday night at BAPS Motor Speedway.

It wasn’t as simple as Edkin’s impressive performance. The track was racy and technical, just like the Marysville, Pa., driver likes it.

Of course, it doesn’t hurt that Edkin was at the front. He led the entire 25-lap distance and collected his second BAPS Paints Super Sportsman win in three starts at the speedway to kick off the 2019 season.

“We came prepared,” Edkin said. “We did a lot of homework over the offseason and tried to find the little things in our operation that needed addressed.

“We found a lot of speed working with a few different people. I’m really happy the season has started the way it has, other than last week getting used up. Otherwise, we might have three in a row.”

Edkin jumped out front on the start, but his pace was slowed on Lap 2 when Mike Enders stopped on the speedway. The restart was much like the first, with Edkin charging out front.

Scott Dellinger was in second and trying to reel in Edkin. The defending speedway champion got a good shot at the leader after Matt Ondek and Paul Miller spun to bring out the caution on Lap 10. Bruce Buckwalter Jr. also stopped during the caution.

The green flag flew after another caution on the restart, and Edkin continued to run the top through the first and second corner. Dellinger, meanwhile, was pinned on the bottom looking for a way to sneak by for the top spot.

But, Edkin was too good on the cushion. Dellinger poked his nose under the leader on a late restart and couldn't pull the trigger on a pass for the win.

“I ran, primarily, the top in one and two and the bottom in three and four,” Edkin said. “It was definitely technical. You had to keep an eye on the track, because there were slick spots and moisture spots.

“It was great racing, the most fun I’ve had in the race car since the 2017 season. It was a real racy track, and it really reminded me of that 2017 season.”

Edkin was too much over the final four circuits and took the win. Dellinger settled for second, with Frankie Herr placing third.

Justin Foster was fourth, followed by Steve Fannasy. Timmie Barrick stormed from 20th to sixth in the final rundown.

“You take track position anytime, but the surface was really racy,” Edkin said. “I think you could have started me 12th at the back of the invert, and the outcome would have been the same.

“I could see [Dellinger’s] nose on restarts. I could run the top really well, and I was told he couldn’t get around the top on starts. I never saw him except for entry into Turn 1 on the restarts.”

Bobby Beard started on the pole and wired the field in the Creekside Auto Sales 358 Sprint Car main event.

There were four cautions over the 20-lap distance. Beard was in control from the outset and took the win over sixth-place starter Sean Merkel. Ben Whitaker finished third.

Unlike the Super Sportsman and Late Model events, the Street Stock main had four different leaders over the race distance. Walls, who started 10th, passed Jason Townsend on Lap 14 and took the victory.

Scott Arnold led Lap 1 from the pole before McClane took over. Horan, the sixth-place starter made the winning pass on Lap 16.