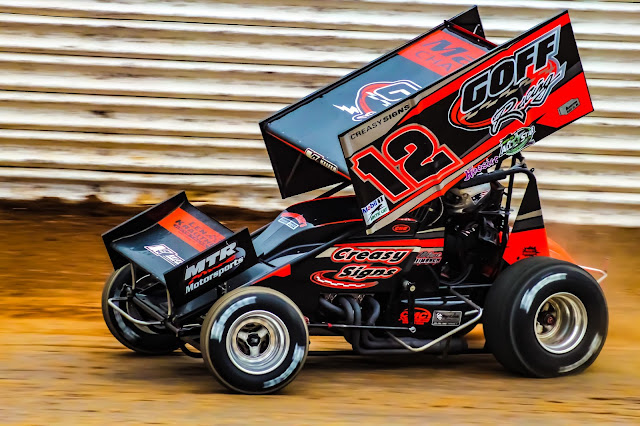 PORT ROYAL, Pa: Blane Heimbach is a veteran behind the wheel of a Sprint Car. When asked about next weekend's Keith Kauffman Tribute Race hosted by the All Star Circuit of Champions, Heimbach remarked how it made him feel old as he remembered fondly trading sliders and competing with the all time leading feature winner at the Port Royal Speedway.

If Saturday night's results are of indication of what's to come, Heimbach still has plenty left in the tank.

Heimbach maneuvered lap traffic and held off Lucas Wolfe and a hard charging Anthony Macri to pick up his 13th career Weikerts Livestock 410 Sprint Car victory at the Juniata County oval. The win moved Heimbach into a tie for 26th on the all-time victory list with Barry Camp, Chad Layton and Stevie Smith.

"I don’t know if it looked any worse then it felt out there, but I just couldn’t do anything with those lap cars out there late," said Heimbach, a Selinsgrove native. "I just tried to not do anything stupid and make nice straight laps. I'm just happy we got it done and are sitting here in victory lane."

Western Pennsylvania invader George Hobaugh and Heimbach led the field to the green with Heimbach jumping out to the early lead. However, it was not for long, as fourth starting Wolfe used the top line in turns 1 and 2 to move into 2nd and slid Heimbach for the lead coming out of turn 4 to lead the opening circuit.

Wolfe would open up a sizeable lead over the next 6 laps before hitting lap traffic on lap 6. That was the break Heimbach needed as he was able to close the distance heading into lap 8 before using the bottom in turn's 3 and 4 to regain the lead coming to the flag stand.

"You really have to get going in these races early and Lucas was able to run all over the place there to start," said Heimbach. "I couldn’t get going there in the beginning, but once I figured out where I could run well on the track I was able to shorten it up a bit and get around him there on the bottom."

Fifth place starting Macri moved past A.J Flick for 3rd on lap 9 and began to put the heat on Wolfe while Heimbach began to stretch his lead. Over the next 9 laps, Heimbach would comfortably lead, though as he attempted to pass the lap cars of last week's winner Ryan Taylor and rookie Tyler Reeser, Wolfe would close within a car length with 3 to go.

"I was good for maybe a dozen or 15 laps out there and the car just  really started freeing up and I wasn't really going anywhere," said Heimbach. "They were racing pretty hard there in front of me and I couldn’t get around them. I didn’t want to wreck us all to get there so I just held on and tried to not make any mistakes."

Wolfe attempted to use the bottom over the final 3 laps to get past Heimbach in turns 1 and 2, though he was never able to pick up enough momentum to make the pass. On the final lap he gave it one last effort, but Heimbach was able to pull away for his first victory at the speedway since 2017 by a margin of .446 seconds.

"I knew that the end would be trouble like that. The track was really good, but it kept getting damp there towards the end," said Heimbach. "We have been no good all year and last year when the track gets slick."

"We've got a lot of work to do still. But obviously this is a step in the right direction. It’s one night and one race, but we're getting better and we'll keep at it to see if we can’t win a few more of these things this year."

Wolfe added that the lap traffic played a big part in the race, which went nonstop, getting away from him.

"We were really good there at the original start but we really struggled there once we hit traffic," said Wolfe. "It's always disappointing when you have the lead and give it up, but hats off to those guys  for taking advantage of things and we'll just keep working to get better."

"It's amazing to get my first win in front of all these fans and I couldn't be happier," said Ferree, from Saxonburg, Pa. "They call this place 'The Speed Palace' for a reason and man was it great out there!"

Chad Myers and Ferree led the field to the green, with Ferree holding a slight edge by a nose at the flag stand at the completion of lap 1.

Going into turn 1, Ferree cleared Myers and quickly jumped out to a comfortable lead, while 4th place starter Gene Knaub was an early mover moving into 3rd and battling for 2nd. However, Knaub would slow and pull into the infield on lap 5 with mechanical issues.

Fereee would approach lap traffic on lap 10 and have trouble getting around the lap cars of Scott Slickinger and Kyle Knapp, allowing Myers and Haus to close in.

"Every time I went high, they went high. Every ime I went low, they went low. I just couldn't pick the right line to pass those lap cars and I really was struggling," said Ferree.

As Ferree attempted to pass the lap cars over the next  several laps, Haus would pass Myers for 2nd on lap 18 and set his sights on the leader. By lap 22, Haus was on Ferree's bumper.

On the final turn, Haus attempted a latch ditch effort slider and the leaders made contact, beating and banging down the front stretch to a standing ovation of cheers from the fans. Ferree would hold on take the $2000 victory by a margin of .112 seconds.

"Andy could've given me a little more nose if he wanted to there, but he raced me pretty clean and I'm just  grateful to hold on," said Ferree of the drag race to the checkered flag.

For Haus, he said the lapped cars really allowed him to have a chance, otherwise without any cautions it was Ferree's race to lose.

"The lap cars really held him up and they played into my hands there at the end to give us a shot," said Haus, from Easton, Pa. "I wasn't able to quite slide him there, but we gave it everything we had and I'm just glad to come home with a 2nd tonight."

Nathan Gramley and Greg Dabrosky led the field to the green with Gramely jumping out to the early lead over Duke, who started 4th.

Gramely would lead for the first 11 laps before Duke, using the bottom of turns 1 and 2, pulled ahead of him for the lead and never looked back.

Jones, who started 7th, utilized the top of the speedway to make moves late, however he was never able to mount much of a battle as Duke went on to win by a 2.226 second margin.

It was Duke's second consecutive victory in the series, as he previously was victorious at Path Valley Speedway before picking up the $350 purse for winning at 'The Speed Palace'.