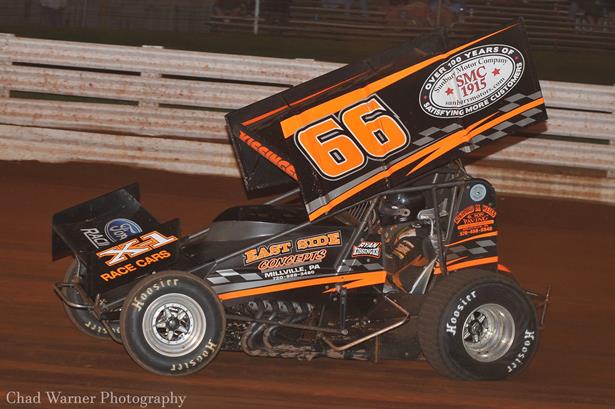 SELINSGROVE, PENNSYLVANIA – Claiming a win that was years in the making, Ryan Kissinger landed his No. 66 360 sprint car in Victory Lane Saturday evening at Selinsgrove Speedway.

Kissinger finished third in his heat race, qualifying for the top-three redraw, during which he pulled the No. 4 pill, starting on the second row for the 25-lap feature.

“I was a little nervous,” Kissinger admitted of heading into the evening’s main event. “We tried some new stuff, but starting toward the front, it was alright. I was able to get in clean air pretty quick, so we were good.”

Kyle Reinhardt and Cody Keller shared the front row for the start of the A-Main, with Kissinger on the second row with Chad Layton. Keller jumped out to the early lead out of Turn 2, with Kissinger powering forward to go into Turns 3 and 4 side-by-side with the leader.

Keller held off Kissinger to lead the first lap with Layton, Reinhardt and Adam Carberry lining up behind them.

The red was brought out on Lap 3 as four cars got bunched up in Turns 3 and 4 – Troy Betts, Brian Nornhold, Todd Gracey and Jacob Hummel all involved, with Hummel’s car going upside down. All four cars went back to the pit area, with only Betts returning to the track in time for the restart.

Another caution was brought out on the restart as Carberry got backwards in Turn 2. He refired his No. 47c machine and rejoined the rear of the field.

Keller led the field to the green, but Kissinger dug his car low in Turns 3 and 4 to fly under Keller for the lead before pulling away to a good-sized lead over Keller, Layton, Reinhardt and last week’s season opener winner, Josh Weller.

By midway through the race, Layton passed Keller for second, with Reinhardt following his lead. The leaders came up on lapped traffic by Lap 15. Layton and Reinhardt whittled away at Kissinger’s lead as they raced through traffic.

“I was being very patient,” Kissinger said of navigating his way through lapped traffic. “I knew I was good enough to get back away from them, so I wasn’t really worried.”

Kissinger was able to hold off Layton and Reinhardt to claim his fourth career 360 sprint car win.

The Capitol Renegade United Racing Club will be back in action Saturday, April 27, at Port Royal Speedway.