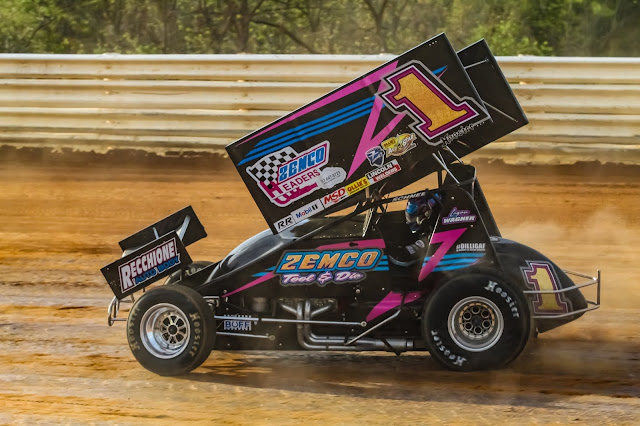 
PORT ROYAL, PA- Logan Wagner has been fast all season. Week in and week out, the defending Port Royal Speedway track champion has barged through the field from mid-pack. If he hasn’t been the hard charger, he's been extremely close.

And fans have grown accustomed to his driving style of running the extreme high-line of the speedway in the turns. It's exciting, but it’s not always the fastest way around the track.

Showing personal growth and determination, Wagner used the bottom of the track to fend off Lucas Wolfe and his father Mike Wagner to pick up his first Weikert's Livestock 410 Sprint Car victory of 2019 and his fourth Port Royal victory of his career.

"Man this Zemco team is something else. When we're fast, man are we ever fast. And it’s sometimes hard to really know how fast you are when you’re out front," said Wagner, who won $4000 for his efforts. "I knew if we could just protect the bottom we'd be pretty good once we got the lead and I'm extremely happy to be in victory lane."

It was a Wagner family reunion on the front row as both Logan and Mike lead the field to the green thanks to earning the most points via a dual heat format that rewarded drivers for finishing order and with passing points.

And as the green flag dropped, it was the elder Wagner jumping out to the early lead after making his car stick on the bottom in turns 1 and 2 and pulling ahead down the backstretch to lead lap 1 over his son. Meanwhile, Lucas Wolfe was able to pull to the inside of Blane Heimbach to take the third positon just after crossing the start finish line.

Two laps later, Logan made his first move for the lead as he slid under his father in turns 3 and 4, only for Mike to cross back under the slide-job attempt and continue to lead the field. On lap 5, Logan would make what ultimately turned out to be the winning move as he regrouped and slid under Mike for the lead on lap 5 in turns 1 and 2, this time making it stick and cutting off the momentum of his father down the backstretch.

"It's always something special when you get to race against your family and leading the field to the green was a unique experience I'll cherish," said Wagner. "But we're both out there to win races and he was giving me everything he had."

"My dad probably races me harder then anyone else out there, so I knew it wasn't going to be easy. We exchanged slide jobs there a  couple times and I just had to be patient and I knew eventually we'd get it."

Two laps later, Wolfe would use the top of turns and 3 and 4 to pick up momentum and power under Mike Wagner for second heading into turn 1 just after the flag stand. This put Wolfe within striking distance of the leader.

Though the large lead was short lived. Six laps later, Justin Whittal spun out in turn 2, bringing the leaders back together during the only caution of the 25 lap feature.

With his lead gone and a pair of savvy veterans on his tail tank, Wagner knew it was time to make a change and do something different to protect his position.

Coming back to the green flag, Wagner sped into turn 1, this time using the bottom of the speedway. The move worked as over the next few laps Wagner stretched his lead to nearly 2.0 seconds

"That caution happened and up to that point we'd been running the high side most of the race and I knew if I was going to hold off Lucas and my dad, I was going to have to adjust," said Wagner of the lap 15 restart. "Those guys have way too much experience and way too much knowledge to just give them the bottom of the speedway on a restart."

"So I drove it in there low and let the car do it’s job and just tried to be smooth and I figured that be enough."

As Wagner checked out, the race was heating up behind him. While Wolfe and the elder Wagner remained steady in their positions, Ryan Smith, Heimbach and last week's winner Danny Dietrich were exchanging lines, with Dietrich ultimately splitting the two down the front stretch on lap 17 to claim the fourth spot.

But nobody had anything for Wagner. He'd hit lap traffic again on lap 21, however Wolfe would never mount a serious attempt. Coming to the checkered flag, Wagner would win by a margin of .759 over Wolfe, Mike Wagner, Dietrich and Smith.


He also extended his point lead at the track as he looks to win back-to-bavk championships.


Heimbach, Dylan Cisney, Ryan Taylor, Steve Buckwalter and Jared Esh would round out the top 10.

In victory lane Wagner would climb to the top of his wing and celebrate with a beer in honor of a family friend that passed away last week.

"It's hard to talk about it, but that whole deal on the wing was for him," said an emotional Wagner in reference to his friend Glenn Winnick. "Glenn lived his days harder then anyone I know and lost his life last week."

"I really wanted to win it for him last week, but he was riding along with me here tonight and it’s just a really special win."

For Wolfe, it was a good run, but he needed to be able to get to the front quicker and was happy with the second place finish.

"I just didn’t get to the front quick enough. Mike and Logan were racing and if I could've gotten closer, maybe I’d had the chance to sneak by," said Wolfe. "It was going to be incredibly difficult to overtake a good car in open track when he got the restart. Ultimately we had a reasonable result and congratulations to them." 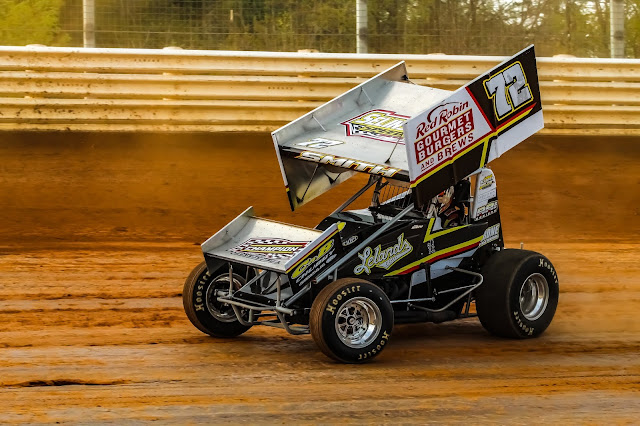 When Ryan Smith climbed out his car following the 25 lap Capital Renegade United Racing Club feature 360 Sprint Car event, he let out a sigh of relief.

Following in the footsteps of the legendary Greg Hodnett driving for Mike Heffner, a big new sponsor in Red Robin Gourmet Burgers and a legion of fans clamoring for a victory, you could say that expectations have been high ever since this pairing was announced in January.

And finally after multiple podium finishes at various tracks and a lot of consistancy, Smith picked up his first win of the season over Lucas Wolfe and Steve Buckwalter.

"This means the world to our team," said Smith, of his $2,000 victory. "I've been trying really hard the last few weeks and was able to finally pull one off here."

"I know Greg is watching and I hope he is proud. Hopefully this is the first of many wins for this team."

But it didn’t come easy. Lucas Wolfe, fresh off a podium finish in the 410 Sprint Car feature, blasted to an early lead from his pole starting spot over Brian Carber. Meanwhile, Smith, who started 6th, used the top of the speedway to move into 4th in turns 1 and 2. In turns 3 and 4, he passed both Curt Michael and Carbwer to move into 2nd at the flagstand.

Smith quickly set his sights on Wolfe, however as the leaders  entered lap traffic on lap 7, Wolfe was able to extend his lead by over 1.0 seconds. Setting a rapid pace, Smith first looked to the bottom of Wolfe in turns 3 and 4 on lap 13, but could not make it stick and settled back in behind Wolfe.

Like an animal stalking it's prey, Smith hit his marks and waited for the right opportunity. As Wolfe picked off lap cars, Smith patiently waited, following the Pabst Blue Ribbon car's every move.

Meanwhile, Buckwalter moved into 3rd on lap 16. But this was a two-car race.

Finally on lap 19, Wolfe got a little high in turns 1 and 2 and Smith dove to the bottom. This time it worked. Powering down the backstretch, he would never look back.

"For a while there I got the wing too far back and just got too tight," said Smith. "Lap traffic was pretty tight, so I knew that's where I had to pounce on him."

Smith would cruise to a 1.402 second margin of victory over Wolfe, Buckwalter, Austin Bishop and Josh Weller. Chad Layton, Michael, Adam Carberry, Ed Aiken and Derek Locke would round out the top 10.

"Mike (Heffner) isn’t here tonight, but I'm grateful for the opportunity to drive this car,"
said Smith in victory lane. "I know the guys from Red Robin are here and I;m sure they are pretty happy. Hopefully this is the firdst of many wins."

For Wolfe, it was another bridesmaid finish on the night.

"I got caught behind a few lapped cars and he was in the right place at the right time and ultimately they capitalized and that's why they're up there and we are here," said Wolfe. "Second isn’t bad, but you've just got to be better when you start up front. Hopefully we can do that next time out." 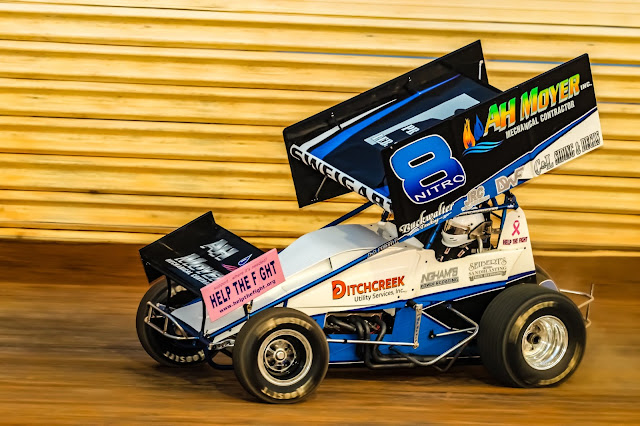 "Two years now! This elusive first win has been killing me," said Sweigart in victory lane. "We been working so hard for this and I'm beyond happy to be up here in victory lane."

Hanson and Colton Hoover lead the field to the green flag form the front row with Hanson jumping out to the early lead.

By lap 5, Sweigart had maneuvered himself to the 3rd position using the high line of the speedway.

A late caution on lap 14 bunched the cars up. Hanson tried to make a move on the bottom of turns 1 and 2 on the restart, however he had nothing for Sweigart.

"I knew there  was really nothing left on the bottom and if I just stayed u top and ripped the lip, nobody was going to have anything for us," said Sweigart.

Jones, who started 9th made a late move into the 2nd position on the last lap, but Sweigart would go on to collect the $350 payday in dominating fashion.