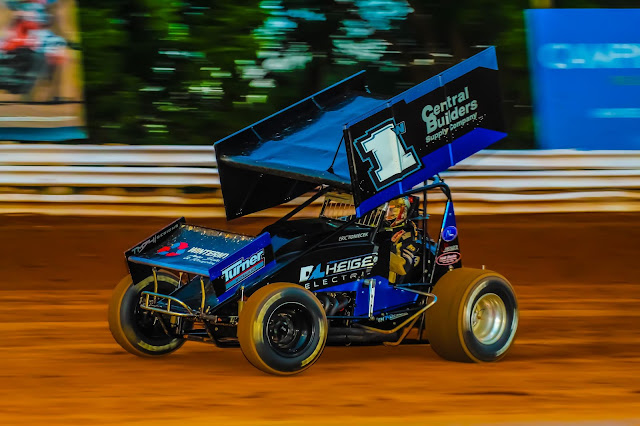 Coleby Frye, of Dover, wired the field for the win in the 25-lap model feature. It was Frye’s 21st career win at the Snyder County oval.

Reinhardt and Frye both collected $2,200 for their Opening Day victories.

Brandon Moser, of Middleburg, and Smith Cope, of Danville, also wired the field for their opening night wins in the 15-lap pro stock and 12-lap roadrunner main events, respectively.

Mallie Schuster and Cody Keller got together in the first turn at the start of the sprint car feature with both cars flipping and bringing out the red flag immediately.  Both drivers were uninjured.

Outside front row starter Davie Franek swept around the outside of the track to take the lead from polesitter Derek Locke with Mark Smith Jason Schultz and Kyle Reinhardt in hot pursuit.

On the fourth circuit, fourth-place starter Reinhardt made the winning pass by Franek in turn one. Lap eight brought out the caution flag for a car slowing on the speedway wiping out a 2.6 second lead. Smith used the restart to take third from Locke as Reinhardt again started to build a sizable lead.

At the halfway point, Reinhardt was leading Franek, Smith, Locke, and Shultz. Smith used the low side of turns three and four to take second from Franek who then slowed to a stop with a flat.

Smith pressured Reinhardt at the start but could not keep pace with him.  Reinhardt beat Smith to the finish line by 3.4 seconds.  Locke, Jason Schultz and Chad Layton rounded out the top five.

Second-place starter Coleby Frye rocketed into the lead of the start of the late model feature and was followed by polesitter and defending champion Bryan Bernheisel, Justin Weaver, Brett Schadel and Danny Snyder were in close pursuit.

Frye, who is back driving his own F1 number racer, immediately went to the high side of the speedway.

Frye again assumed the lead over Bernheisel as the pair drove away from the field.  Lap 11 saw the yellow flag unfurl again as Kyle Lee and Meade Hahn spun in the second turn.

Frye led the rest of the distance, despite some additional caution flags winning over Bernheisel by 2.9 seconds. Schadel, Snyder and Jim Bernheisel finished in the top five.

Fourth-place starter Brandon Moser took the early lead in the pro stock feature and was followed by Shaun Lawton, Kyle Bachman, Corey Long and Brad Myers.  Moser built up a lead but by lap eight Lawton was on his rear bumper looking for the lead.

The caution flew on lap 11 slowing the field.  On the restart Moser continued to lead with Lawton stalking him but Moser took the checkered flag, .322 second in front of Lawton, Bachman, Long and Myers.

Pro stock heats were won by, Moser and Lawton.

Polesitter Smith Cope took the lead in the roadrunner feature and was followed by Will Brunson, Jason Zook, Curtis Lawton and Brian Mabus.

A lap five caution was disastrous for Brunson who slowed on the track bringing out the caution on the next lap.

Cope spent the rest of the race holding off the charge of Zook around the high side of the speedway but Cope, despite the fact that he didn’t have brakes, slid up to close the door and take the checkered flag over Zook, Lawton, Mabus and Tom Underwood.