Weller carries momentum from 2018 championship into first win of 2019 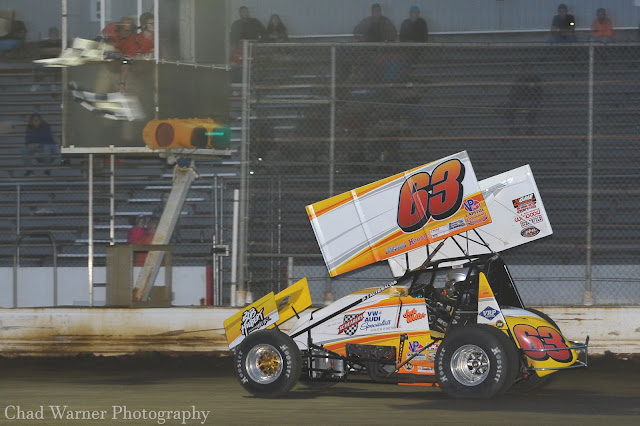 And the 2018 champion, Josh Weller, carried the momentum from last season into the day’s event, picking up his first win of the season in the opening day race.

“We were pretty confident coming in,” the reigning champ said of kicking off this season following the 2018 championship. “Bridgeport’s always a good one for us, but it certainly helped to come in with that goal and then it’s certainly going to help to get this one out of the way. Last year we won the first race and this year we won the first race, so hopefully that’s a good sign.”

Weller started on the outside pole for the 25-lap feature next to polesitter Chris Allen Jr. Weller grabbed the early lead headed into Turn 1 with Steve Buckwalter, Allen, Troy Betts and Chad Layton falling in line behind him.

The top five spaced themselves out before a caution was thrown on Lap 8 after Ryan Quackenbush, the 2018 URC Rookie of the Year, grazed the wall along the backstretch. His machine was pushed back to the pit area.

Weller chose the outside lane for the restart, driving out of Turn 2 with the race lead once again, maintaining a comfortable distance between himself and Layton, who had worked his way up to second.

“It felt good. The car felt good,” Weller said. “We could put it pretty much anywhere that we needed to. Starting on the front row like that, obviously we couldn’t tell what was fast behind us and where other guys were coming from, but we were quick enough to hold everybody off at least.”

Weller had control of an impressive lead when a caution came out for the No. 39 of Ryan Watt. However, the yellow turned to a red as smoke poured from the No. 47 of Adam Carberry in Turns 1 and 2 before flames erupted from the car. Carberry was ok and both cars were pushed back to the pit area.

Weller once again chose the top lane for the restart, sharing the front row with Layton and followed by Lucas Wolfe, Jason Schultz, Curt Michael and Betts.

Weller’s No. 63 maintained control of the lead on the restart as he went low in Turns 1 and 2, but this time Layton stayed close behind. He showed Weller his nose down in Turns 3 and 4 before trying again in 1 and 2 before Weller motored away again.

“We were having a problem with our motor restarting, so once we got on the frontstretch we were good, but I needed to get through the corner to get going,” Weller explained.

The final caution of the evening was thrown on Lap 24 for Bill Unglert, who slowed on the backstretch and was pushed behind the wall. Weller held his line on the final green-white-checkered restart to claim the win in the first URC race of the season.

Weller was joined in the top five by Layton, Schultz, Michael and Wolfe.

The United Racing Club is a traveling 360 sprint car organization that was founded in 1947. Following the value “It’s your club, it’s racing the way you want it,” URC is governed by its own membership and runs at local dirt tracks across the northeast. For more information, please visit www.urcsprintcarseries.com or find us on Facebook, Twitter and Instagram.
Posted by Bill McIntyre at Monday, April 15, 2019